From Uncyclopedia, the content-free encyclopedia
(Redirected from N00bs)
Jump to navigation Jump to search 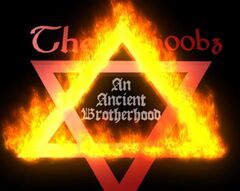 The n00bz, A sign of The Brotherhood with their famous burning star

~ A normal person on you being a noob

n00bz, better known as Teh n00bz is an ancient brotherhood. Its aim is to elimate all the posers from the world. The family was founded sometime in the year 1083 and since then has slayed many a poser. Its a highly organized society, with a well organized hierarchy where a Grandmaster or Grandmasters at times head the family, with second-in-command generals. Not much is known about the details of its internal structure. The brotherhood has remained underground for many centuries, but recently it has risen to the surface and its proving to be very focused and serious about its objectives.

According to the Book of Lore there lived a legendary n00b family in the remote corners of the world. These people were warriors of the type never seen before, their slaying skills, unparalleled. They were known to the world as 'the n00bz'. Led by the first grandmaster, the most powerful n00b of all times, N00b Saib0t, the n00bz were the greatest warriors that ever walked on the surface of this planet. Now where exactly the word evolved from is unknown. But the bloodshed and the pawning of the posers that the legendary n00bs of ancient time did is not a fact for the weak hearts.

Book of Lore says that the ancient n00bz once ruled the world. And they were a family, a brotherhood. There was not a single poser left in the world, but then as history reads, a time came, when the original warriorn00bs, who were the cause of eliminating posers, began to get lazy and soft due to not having any posers to pwn. And now today, they are weak, only a shadow of what was yesterday. And the new, mutated, generation of n00bz came over, for hundreds of years they spread over all of the world. Historians found records which state that there was a culprit found from within The Brotherhood. A betrayer, poser from within the legendary n00b family. He was known as the LinkinPark Poser, he was thrown out of the family, he was degraded. Then he sought revenge and gave birth to many lpposers.

Teh n00bz successors united once again to fight for justice, the battle of good and evil, the armageddon! To remove all traces of posers that had once again risen.

Every now and then, when a rat is found in the brotherhood, the grandmasters with the help of the high-ranking n00bz perform "Cleansing" This is of two levels, the smaller punishment is known as "The Dark Ritual" while the gruesome, ass-hurting punishment is known as "The Impaler" Testament (band) provides the live performance of the n00b anthem, "The Ritual" Which was written and recorded by the band for these rituals.

This is performed by the GM. The infidel is taken to the unholy grounds of terror by the n00b warriors. The Grandmaster wears the Black Robe, a hole is dug down in the ground with fire burning around. The spear is then pushed in the infidels ass until it can not go any further. The sore ass is then placed with the spear in the hole with fire around for normally 2 weeks. In the background everyone can hear Testament playing The Ritual. For Example, the following was taken from the History books of the n00bz while someone by the name of ravi suffered the ritual; *Wears his black robe and takes the burning star in hand* N00b Warriors! Take this infidel to the unholy grounds.. ...*sticks a spear in ravis arse, places the spear in the middle of the ground* Thou shall stay here till the day you realize that thou arse is MINE!

This is the punishment who has either suffered the Dark Ritual and still did not stop with his lame antics, or who has broken the n00b rules to an an extreme. This is performed by the spirit of the mighty, N00b Saib0t himself. N00b Saib0t makes his appereance, he summons a mighty warrior, Motaro. Considering the terrifying presence of the First Grandmaster only few people are present when this ritual is being performed, N00b Saib0t, Motaro, the victim and the GM(s). No other n00b is allowed to watch. Though the screams reach far and beyond. After summoning Motaro, N00b Saib0t orders Motaro to hold the infidel in his hands, high up in the air. Saib0t then takes out the 16foot long pole, better known as "the Impaler" and sticks it in the ASShole of the victim who is hanging in the air in the hands of Motaro. While the GM then puts his hand in the victims mouth and while the Impaler reaches the throat from the ass, the GM pulls it out from the victims mouth. The situation, The Victim is penetrated by the Impaler and half of it is inside and half coming out from both of the sides, i.e., the ass and the mouth. Motaro then places the victim on top of the burning coal. Where he stays for 10 days. The Master, (N00b Saib0t) vanishes, and life turns back to normal.

The Brotherhood has a number of ancient monuments, each hidden in the dark corners of the world. Some of them are discussed below.

The Truth, An ancient Tome[edit]

History Speaks of a Legendary tome that encompasses and contains all the Metal Truths (circa: Time of Noobz), for example the answers to the questions that question the skill of certain lords and compare them.

Historians are currently trying to locate it but the exact location of the Legendary Tome is Unknown. Legend has it that it is in the Ancient City of Noobopia. A city where all the noobz (warriors and soothsayers alike) lived in harmony. Presently the Location of the city is also under suspicion.

This Legendary Temple, located on the highest peak of Mount n00balayas, is an homage to the great lord N00b Saib0t. The path to the temple is full of Difficulties which are too much for an average n00b. To pass through Either thou shalt possess the warrior Qualities of the Commanders or the legendary aura provided only to the Grandmasters.

The Temple Itself is a piece of Art... Broken LP CD's are strewn under the feet of the statues of the legendary Elder Lords, each appearing to hold their Best albums' CD in one hand and their weapon in the Other (eg. Petrucci holds the CD of Train Of Thought in the Left and his Guitar in the Other)

The main path is adorned with Countless skeletons of LP poseurs decorated and painted. And In the Middle of it all stands the Throne of N00b Saibot Himself. He has his Legendary Pawner in One Hand(A Mythical Blade of Pawning) And his other Hand holds the Scroll of Knowledge which is protected by an aura preventing even the mighty GM's From getting to it. The Scroll contains the Location of The Holy Tome of Truth. The one relic dear to all the n00bz.

The n00bz always had a strong army with true metalheads. They have fought and won countless battles in history, the famous ones fought in the, L P Creek and the Heavy Metal Valley. Legend has it that there was immense bloodshed, but the n00bz have rarely (If ever) lost a battle.

The Battle of the L P Creek[edit] 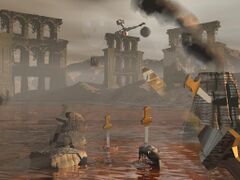 An artists portrayal of the Battle at the L P Creek, with the LPPoser General dying because of a sword slashed through his head

This battle was fought with the elite poser eliminating metal squad of the family. The army was led by the grandmasters of its time. L P Creek is the home of the L.P Posers, the n00bwarriors waged war against them, LPPosers fought back, tried their best; the river Metacium turned red because of all the blood. The then leader of the LPPosers was killed by a sword to his head, he died gurgling in the river and his own blood. The exact figures of casualties of both the armies is unknown, but the horrors of the battle of L P Creek will always be remembered.

Attack on the Heavy Metal Valley[edit]

On June the 1st 1999 an army of 10,000 DJs each with 300 followers, 10,000 aircraft and 17,000 tanks invaded N00bia, along an 18 hundred mile front. These were the LP Posers. N00bs have been caught off-guard, the n00b grandmaster was horrified. The n00bz lacked a large number of hardcore metalheads. The wannabe metalheads gave up, posers had captured 3 million n00bz and converted some into posers and killed the rest. The n00b grandmaster, N00b Metallica needed time to build up his forces and ordered the n00bz forward. N00bTheater a highcommand of the warriors slayed the posers with his "Stream of Consciousness" Solo! A million n00bz were fighting the posers with brilliant guitar solos. But with "three chords" the posers broke through (for music is nothing but business for these posers). 5.5 million posers reached Heavy Metal Valley. N00b Metallica with his warrior n00bz was fighting alone with the posers while N00b Megadeth was doped and sleeping! N00b Metallica killed nearly half of the posers army with his "Fade to Black" solo. But then the Poser General Ar-full-ov-Shit, as he was known, killed some of the greatest n00b warriors, N00b Metallica was falling as a victim to the numbers game. The fallen warriors cried "Hail Heavy Metal!!" seconds before their death. The cry was heard in the whole valley. N00b Megadeth's sleep was disturbed, he was now aware of the battle and charged down with his doped n00bz surrounding the Posers on all sides.

The two grandmasters surrounded Ar-full-ov-Shit, N00b Metallica cried, "Metal Up Yer Ass" and stabbed his sword in the generals ass. N00b Metallica asked his fellow Grandmaster to finish Him, N00b Megadeth yelled, "Boy! Your soul better belong to Jesus.., Hmmm-mmm cause your ass belongs to me!" and chopped the generals ass off. The n00bz attacked & caputred the remaining posers and fed them with true metal. Two days after the battle the n00bz sacked the poser capital, Linkin Park City aka LPC!