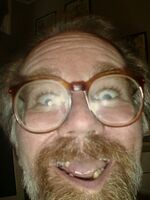 Not really a dummy, just crazy, though technically craziness is a branch.

The reason for terms such as "dummy" quickly became obvious when dummies refused to "dummy up" (as a Chicago gangster might put it). A dummy's utterances are, ironically, all dumb; and, like a website vandal, it quickly becomes easier to categorize the dummy than to seriously analyze every dumb thing he comes out with. In the United States, Republicans engage in the same "defense of the brand" by insisting that the label means that their candidates will vote differently from the Democrats. Anyone who believes this claim is a real dummy.

Terms to refer to members of an unfortunate group are constantly changing. The Negro was happy with that term for a century of peacefully picking cotton, until the famous racial awakening, when they became "colored." Then the uppity ingrates griped about that too, and the world adopted African American, especially to refer to Arab mongrels and people from India. We can expect that the word "dummy" will fall out of favor any day now, and a new term will be needed, to let us categorize the dim-witted person and give us a few more years before he figures out we are doing so.

The politically correct way to refer to a dummy is to delicately suggest that he is hard-of-thinking.

The virus dumbera idiotarum. Most people don't think a virus causes dumbness, but the discoverer did, so he got naming rights.

Science is mired in debate about whether being a dummy is communicable. Where there is one dummy, there are usually dozens of other dummies, suggesting a pathogenic vector. A minority view is that it is "self-selection": A dummy doesn't infect another, but they become dummies independently and then simply elect to go to all the same dumb bars and clubs, en route to all winding up in Congress. This "herd mentality" may have evolved as a defense mechanism by individuals who don't want to look like the dumbest dummy in the place.

The reader may wonder why anyone would go out of his way to look for a dummy, but pathbreaking science is in constant need of new investigative subjects, especially for the entertaining LD50 game, in which the researcher determines what threshold is necessary to kill off exactly half of them.

The Southern United States is a fine place to look for dummies. In fact, Southerners are not all dummies, but their most popular "rebuttal" in any debate is to shout, "Dummy!" and this may help the researcher find subjects.

The country of Peru is another fine breeding ground for dummies. Nothing they do is particularly dumb, but they are notorious for forgetting a person's record of corrupt acts and ineffective programs the moment any of them enters a voting booth.

After obtaining research subjects from a pool of dummies, it is best to confirm that a subject is in fact a dummy. A bathroom is a convenient way to achieve this. The dummy usually prefers a bath, and to be accompanied in the tub by a television set.

Science is a recurring career option for dummies, as the National Science Foundation provides plenty of loot to conduct studies, some of which is available to pay dummies to be subjects. Even so, many dummies choose college athletics, where the corresponding organization (the NCAA) ensures that they get none of the gate receipts at all.

Another lucrative line of work for the dummy is in automobile crash testing. New employees are constantly being sought, as previous employees make the Highest Sacrifice measuring what they are paid to measure.

There are scads of jobs for dummies in computing. Unfortunately, inexplicable problems with the infrastructure soon follow, for which the usual diagnosis is PEBKAC (Problem Exists Between Keyboard And Chair).

Even a dummy could win with this hand, though he would probably show everyone and gloat before the bidding began.

A dummy seeking work often leaves his calling card at the Ventriloquist's Guild.

The dummy is also the key decision-maker in the card game of Bridge. Bridge was invented for dummies, as no intelligent person would waste grey cells on its rules. Briefly, every slam is worth 100, except that the second is worth 1600 and the third is worth 1900, except when you are doubly vulnerable on both sides. Game play is a dumb process of matching, and trumping at the table is welcomed. Of the dummies who play this game, the designated dummy in any game is available to go into the kitchen and bring out more beers.