It's just standing there. Watching you. Waiting for the kill.

Scarecrows are an unintelligent and very misunderstood race of people. Most scarecrows take the appearance of potato sacks with limbs. The origin of scarecrows has been a mystery for years. According to scientists, scarecrows are either a subspecies of primate, or human-like invertebrates.

Like black people, Jews, dolphins, and many other important races, scarecrows have had a long history of suffering. Despite their suffering, they have made a comeback by slaughtering countless humans, and are somewhat more popular in society today.

Scarecrows originated from the open savannahs and jungles of Magapaskar, an island off the West coast of Russia.

In 1872, Africans settled on the island in hopes of escaping slavery. They soon discovered the scarecrow when they killed one while looking for food. They cut it open, hoping to use up its bones, blood and organs. All they found was hay, though it was pretty useful for sleeping on and it helped with the bonfire. And that was just the beginning.

A decade later, the British settled on the island to look for their escaped slaves. They too found a scarecrow and basically did the same thing. They eventually found the Africans cooking a wild boar over a bonfire. Just as the two races were about to battle, they decided to take their anger out on the scarecrows. Hundreds of scarecrows were killed, and thousands more were captured as slaves. The British took half of the scarecrow population, while the Africans took the other half. A number of scarecrows somehow managed to escape, only to later be captured by the Americans.

Upon reaching land, the scarecrows were sold to farmers. Unfortunately, they did a terrible job at working, mostly because they had no brains. They had little redeeming value until the crows invaded the land to raid cornfields and ruin every farmers' life. The and farmers gathered together to find a solution to the crow problem. One of them suggested nailing someone to a wooden pole. Of course, they chose a stupid scarecrow and nailed it to a wooden pole. Since then, farmers would nail scarecrows to wooden poles in hopes of scaring away crows. However, crows weren't at all scared of scarecrows and the concept of nailing scarecrows to wooden poles was useless. Scarecrows were still being nailed to wooden poles to be punished for their stupidity. After all, it's fun to watch retarded people suffer. 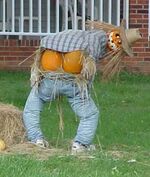 A scarecrow expressing its view on the human race.

Scarecrows soon adapted to their new environments. With their numbers on the rise, the scarecrows decided to rebel against their human foes.

On the Halloween night of 1961, Farmer Brown noticed that the scarecrow he killed the other day was no longer nailed to the wooden plank. The scarecrow soon popped out of nowhere and killed him, then ate his brains in the middle of the dark cornfield. It was then scarecrows developed their popularity in Horror films and more recently in 1D animation, as well as their reputation of killing and eating the brains of civilians who wander into cornfields.

One particular scarecrow, Scarecrow Jesus, became incredibly famous for fighting for the freedom of his scarecrow brethren by slaughtering the human race in massive numbers. He was sadly arrested and tortured under the Pontius Farmer, and forced to carry a wooden pole that he was later nailed to. He soon rose from the dead and, after killing several kids who wandered into his cornfield, ascended into the sky. It is said that Scarecrow Jesus will return one day to kill any farmer or horse who kills his scarecrow brethren.

How to protect yourself from scarecrows[edit]

The most obvious way to avoid scarecrow attacks is to not wander into cornfields at night. There is a 98% chance that a scarecrow is waiting in there to kill you and eat your brain. In case you should ever find yourself in this situation, you must carry a flamethrower or some other fire-related device, as fire is one of the scarecrow's few weaknesses. Another is Chinese food. I have no idea why. However, certain types of scarecrows are known to carry chainsaws, scythes, and run over people with tractors (usually the kinds who like to add more drama to their kills. Scarecrows like drama). It is then where you would probably die. Or you could just trick them. Remember: scarecrows have no brains.

"Some people without brains do an awful lot of talking!"

Farmers are not the only things scarecrows hate. Scarecrows are also known to compete with other creatures in the vicinity as well. Rednecks and scarecrows compete for land, as they have a lot in common. They both live in the country, they both have no brains, and they are both ridiculed by the damn cityfolk. Redneck children make up about 70% of the scarecrow's natural diet. Aliens are known to disturb scarecrows when they make their crop circles in the cornfields. Large gatherings of scarecrows would then take a dump on the crop circles as vengeance. Aliens would get revenge by abducting the scarecrows (personally, I have no idea what they do with them next). Scarecrows are sometimes brutally killed by horses, who will slice scarecrows open and eat their innards. There have also been reports of scarecrows being used as crash test dummies, punching bags, and for lighting fires. Not that anyone cares.