A lumberjack shows off his chainsaw shaped penis.

“The ultimate weapon. For use on zombies, skeletons, and Jehovah's Witnesses.”

“Ladies and gentlemen! Introducing the new chocolate chainsaw and the chainsaw flavoured water! Yeah! Get the fuck up......” 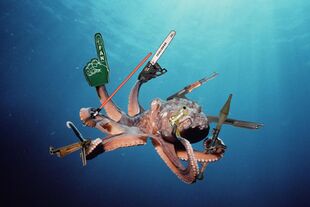 ~ Some Space Marine on chainsaws

Chainsaws are incredibly useful tools for cutting lumber. Since their emergence, they have completely phased out steam powered wood ejaculation devices (SPWED) and have made many lumberjacks independently wealthy. Chainsaws are mor commonly known as expedient decapitation devices for zombies, heathens, ninjas, pirates, scientologists, and generally anyone who happens to be pissing you off or standing in chainsaw range. For more on useage, See Bruce Campbell.

The origin is debated, the most common and accepted version is that the first chainsaw was probably made around 1830 by the German orthopaedist Bernard Heine. This instrument, the osteotome, had links of a chain carrying small cutting teeth with the edges set at an angle; the chain was moved around a guiding blade by turning the handle of a sprocket wheel. As the name implies, this was used to cut bone. The first usage of the word "chain saw" was by General Custer during his famous last stand. His conversation with a field colonel is often told as thus:

The tool was not used again, until it was re-invented last Thursday, when a smart man named Dag Norbert was injured tripping over a tree stump. Out of commission for about 69 months, he decided to find a way to go out and work instead of laying around and such. He fiddled around with some flywheel parts, gears, string, and a motor for about a month until finally he held in his hands the first (second) chainsaw. It was a clumsy loud thing too. Nevertheless, the chainsaw (well, it didn't use a SAW at the moment) was born.

So Dag uses that cutter for about 2 weeks, when someone comes up and says he'll buy it off of Dag for three hundred dollars. Anyone in his position would have sold it right then and there to that guy but, he didn't. Dag was well enough to use his Ax again, but nearly 6 weeks later on a trip to the market we all notice a whole bunch of Dags chainsaws for sale at a hundred a piece! The box said that the chainsaws would cut threw anything. It wasn't all rattly either, it was a slick working machine too. Dag got upset that the man had ripped him off of his chainsaw, and said that he'd eventually take him to court. 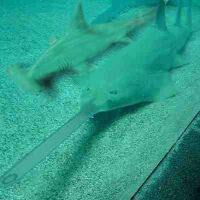 This was a landmark case at the time, with much at stake for both sides. If Dag won, he could reap all that money from the person who bought the prototype, since there was not a written agreement, and collect money from the plagiarizers, who blatantly stole the design for themselves. The representative for the family Pristidae, "Shane" was himself a tough talker, and had the backings of a lawyer who dealt with a similar case, Hammy of the Sphyrnidae family. Hammy argued that because of Freedom of Design, that any animal could acquire the looks or similarity in anything. Hammy pointed out that even though Fishermen used rods and lures to catch prey, angler fish do the exact same thing, using a lure and a short rod extension. Dag, representing himself, was at a loss by himself and could barely keep up with the lawyer.

The case ended with both of the sides reaching an agreement, "Shane" and others would be allowed to keep the design, and Dag would receive money from each chainsaw sold. 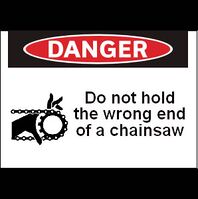 Naturally, such a wonderfully effective device has been the subject of great concern. Inexperienced carnies often lose limbs on stage when attempting to juggle the usual 3 chainsaws, stool, torch, badger and clown nose. Needless to say, Dag got his ass sued by a ton of clowns. Every effort to avoid another long drawn out legal battle was taken, and large bright signs were sold inside every chainsaw package to insure that one would not sue Dag again. This plan turned into another great success, with little money to be paid to make the signs. The early ones had sharp edges, and in retrospect wasn't such a good idea at the time, but it was an idea that worked.

This 'bot is waiting in the wings for his next Duel to the Death.

Another new emerging trend is to modify robots with weapons and use them to fight one another. These "Battlebots" would fight each other in a pit to the death for the reward of money from the owners. Chainsaws are the most common and deadly, resulting in a cruel quick death to whichever machine gets the first slice in. There is concern of a backlash from the robots because of the mechanical cock-fighting, and new laws concerning Robot Rights are being discussed in Congress right now.

One of the more disturbing facts about chainsaws is the alarming number of diseases that they can carry and spread. Careful examination of a chainsaw blade will reveal numerous signs of dangerous diseases. The most common of these diseases is DDS, with SIDS coming in a close second. These diseases can be eliminated from the chainsaw unit, but at the cost of destroying the blade itself. Currently, the only feasible solution is to use extreme caution when using or near a person using a chainsaw. Still, despite precautions by the owner the chainsaw is still one of the largest contributors to DDS and SIDS, and if you can't handle the risk, then use nail clippers instead.

During the beginning of WWII, A Canadian specialist battalion used the idea of the logging device as a means of close combat. At the time, there had been news reports that a crazy inbred monster in Texas had gotten ahold of chainsaw and used it to kill travelers who were unlucky enough to enter this ghost town. Although the authorities denied the existence of Leatherface, it made the people take an interest in the effects of a chainsaw on the human body. The Canadian Army was the first to deploy chainsaws in the field. Despite the fact they had absolutely no abiliy to shoot or take out a sniper, they were perfect for rushing the enemy. Although, it always seemed to end in a pointless death. 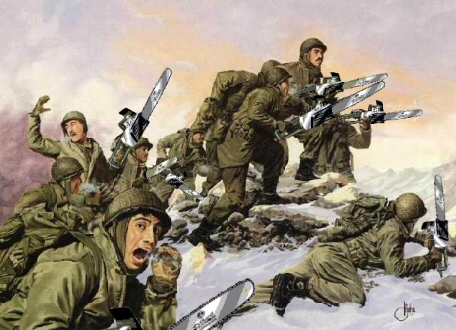 Artist representation of the famous Charge of the Chainsaw Battalion, a pivotal moment on the road to victory which demonstrated the wisdom of bringing Canadian lumberjacks into the war.

Now in the 21st centurey, the chainsaw is a part of the standard US military assault rifle arsenal. Instead of being another weapon, like the Canadian MK.I Close combat specal, the chainsaw is now redesinged as a bayonet for close-combat fighting. The combination of assault rifle and chainsaw is deadly and effective (and also incredibly satisfying). There are rare instances when the insubordinate amount of blood from using the chainsaw can clog the gears near the flywheel, but this becomes a non-issue if occasionally cleaned off.

An Example of the Chainsaw rifle and the effects on a humanoid. Some sadistic little bastards rely solely on the chainsaw.

The bayonet saw its first real widespread use on the planet Sera, where it was used to hold off nasty swarms of crop and grain eating bugs. Some would say using the chainsaw bayonet to try to dissipate swarms of hungry Locusts was a bit of a stupid idea at the time, but when the locust drones started controlling zombie humans, then the chainsaw became realized as a smart choice. Eventually, with the deployment of the Streetlight bomb after killing a locust infected Raam, the battle was won and the locusts swarmed to the streetlight and got zapped. The moth population dropped enormously, and the chainsaw-rifle hybrid was put into the Universal Weapons Hall of Fame.