For those without comedic tastes, the so-called experts at Wikipedia have an article about Bruce Campbell. 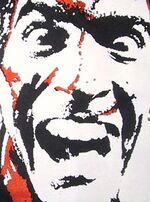 Bruce Campbell on a good day.

You may have been looking for God although you probably knew that.

Please Note: It is common practice to Hail to the Chin before reading this article.

~ Bruce Campbell on himself

Demigod, demon fighter, patron saint of B-Movies and savior of mankind, Bruce Campbell is the love child of Sam Raimi and Hattori Hanzō. HE IS (AND ALWAYS WILL BE) THE GREATEST!!!!

No one really knows where Bruce Campbell was born. The only comment in existence on the subject was when Mr. Campbell said, "I'm not from Texas, that's for damn sure."

Bruce was raised by his adoptive father, John Campbell, the heir to a massive soup fortune, so young Bruce was exposed to the finest education possible.

At the age of four, Bruce Campbell cured all known diseases, but then brought them all back because he wanted to.

At seven years old, he entered college. He finished within a week.

At twelve, he got his first driver's license, but there was a terrible accident and he drove his car into a brick wall. It was at this age that his true powers first manifested. He was able to transform his hand into a chainsaw to cut his way out of the mangled car. Just then, an army of zombies began attacking him. With his newfound chainsaw hand, he made short work of the undead.

The Bruce Campbell Historians Of the Museum of Bruce Campbell have yet to find that mangled car, saying this: "This car could be the most historic find of his early years and where he got his zombie ass kicking powers from."

It was then that he realized his true purpose in life: to be the savior of all mankind. He soon mastered the ability to not only transform his hand but also various other mystical powers, including time travel, pwning, and the ever famous coming up with really kick ass catch phrases that people try to get right but never get it good enough to sound like the original.

I'm pretty sure he had a brother, too. 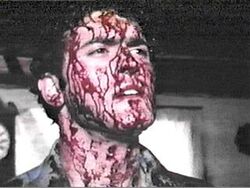 Learning of his true heritage, he traveled the globe to seek out answers. It was along the way that he fought the legendary eight headed crocodile/vulture/demon, TangelaKitchenTimer. After he was victorious, he found a strange, sawed-off shotgun in the viscera of the creature. Its blasts roared like thunder and defeated even the most powerful monsters in one blow, including Hitler, Communism, and George Lucas. He named this mighty weapon the Boomstick. However, only Bruce's divine power could give it the necessary unlimited ammo.

Whilst living in Austria and evading the draft in 1968, he accidentally directed the James Bond movie On His Majesty's Secret Service.

As he approached adulthood, a terrible battle against the demon king, Mark Gottleib , occurred. At the end of the dramatic battle, Bruce was assumed dead, but he had only lost his memory. However, luckily for him (some would argue luckily for the world), he was found by the kind soul Sam Raimi, who nursed him back to health. Together, they made a series of movies based on the vague recollections of the amnesiac Campbell. 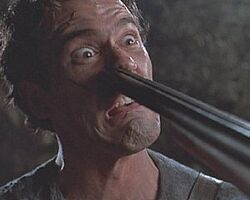 A casual hobby for Bruce shotgun huffing...yeah kitten huffing is for wussies!

Bruce slowly recovered his memory, but he still balanced fighting evil with his career as an actor. He is currently undergoing training to recover his Viking skills, as well as filming a prequel to Bubba Ho-Tep titled Bubba Nosferatu: Curse of the She-Vampires. This is scheduled for an IMAX release in 2012.

His training is guided by his father, Hattori Hanzo, and he is joined in his apprenticeship by former foe, Tim Curry.

Due to his friendship with Sam Raimi, Bruce has made numerous cameo appearances in the first three Spider-man films. Bruce was only able to do cameo appearances because sam raimi would need the combined budget of The Dark Knight, Avatar, and the entire Lord Of the Rings series to have Bruce play bigger roles! He can be seen amongst the crowd in many of the New York City scenes, and he is notably famous for reprising his role as Ash Williams from The Evil Dead in Spider-Man 3's climactic final fight between Sandman, The Night Stalker, and Venom. In the scene, Spidey teamed up with Bruce in Campbell's '73 Oldsmobile armed with a chainsaw and a shotgun and defeated the trio of evil.

This cameo in the third film of Ash Williams is speculated to be in preparation for his major involvement in Spider-man 4, 5 and 8. 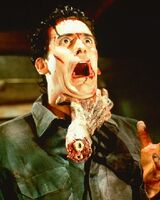 His hobbies include women of all shapes and sizes, including your mom, as well as occasionally hunting giant robots, especially giant robot Hot-Rods, for sport.

He also enjoys fighting various demons and the undead. He prefers to convert succubus's using his mighty chin, rather than killing them. The succubus/MaRonite nuns mainly reside in a convent somewhere in Ireland.

Fact #1. Bruce Campbell and Chuck Norris once fought. The loser had to hide his chin in shame for all time.

Fact #3. When Bruce Campbell stares into the abyss, the abyss runs like Hell.

Fact #4. Bruce Campbell has never done a push-up. This is because the earth's gravity has no hold on him therefore the gesture would be pointless.

Fact #5. The ancient Egyptians constructed the great pyramids to protect their dead from Bruce Campbell.

Fact #6. Bruce Campbell can breath under water and in space.

Fact #7. Bruce Campbell is actually not sure who he is!

It is a well known fact that Jay Leno is Bruce Campbell's arch-rival. They've fought for years about who's chin is mightier. This fighting eventually peaked in the Chin Wars which resulted in the deaths of hundreds, including K. D. Lang, Reese Witherspoon, and Peter Jennings. Leno's ego was also severely wounded and has yet to recover. Many believe it never will.

...just don't ask him to recite the "the three words".

Bruce is renowned for his ability to fire solar laser beams of cosmic electrical energy out of his chin. His chin is also bulletproof; and can fly, severely pummel evildoers, read minds, hypnotize people, talk to animals, get a woman to take her clothes off in a second and is radioactive. This chin has been analyzed and studied by the finest scientists in the world, who have identified it as an Omega-Level Doomsday weapon capable of destroying all life on the planet. Apparently, the right side of the cleft contains the powers of positive things, like life, good, sex, chocolate and the films of Kevin Smith, while the left side of the cleft contains the power of evil, darkness, pain, vampires and Ms. Dalloway.

Bruce also once bit himself during the filming of The Evil Dead; this is what gives Bruce his magical power to emit invinciblity rays from his chin.

He is currently writing his third autobiography, entitled The Left Chin of Doom, in collaboration with Alan Moore which has gone on a temporary hiatus due to Campbell being flung into the Marvel Zombies universe because of an accident involving The Necronomicon, a Playstation 3, and a cheese burrito wrapped in aluminium foil. As of this moment, he is attemptng to kill as many super-zombies as possible while attempting to pick up as many living super-heroines so they can 'give him some sugar' after. And OH they did, and it was good.

Something also worth noting is that Bruce Campbell can stomp Chuck Norris' ass anyday of the week that ends in 'y'.