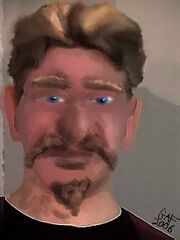 A portrait of Some

“Some argue that small-arms proliferation is a good thing.”

~ Oscar Wilde on P. Danforth Some

"Some have raised questions..."

The opinions of this Some are repeated in articles worldwide. Just who is this Some, and what is it about his opinions that make everyone want to quote him?

Dr. P. Danforth Some: The Man, the Philosopher, the Legend.[edit]

The Harvard professor Dr. P. Danforth Some is renowned for his amazing opinions on all manner of subjects. He is invoked by more editorial columnists than there are ants on a discarded donut. He is so highly esteemed that his name is treated grammatically as representing more than one person -- it is "Some believe" and "Some argue", rather than "Some believes", or "Some argues"-- because indeed, Some is more than just a man. His opinions have caused wars. They have stopped wars. His opinions have become the very engine that drives History itself.

Some suggest that this is just a myth invented to give credibility to the hacks at big newspapers and Wikipedia, who only wish to bolster their own opinions by assuming that there must be at least one other person who thinks the same way. This is one of the many jokes Dr. Some tells about himself, which keep his students in a state of constant, mildly annoyed, amusement. Some's cavalier attitude about his own opinions have caused certain people to call for locking the man away to protect the world from the sudden effects of Some's latest opinions.

In actuality, when people mean to editorialize, or otherwise cloak a horribly biased opinion in a veil of neutrality, they invoke Dr. Some's critics. Dr. Some, being highly controversial, has so many critics that just about any possible opinion can be held by "Some critics." There are those who hold Some critics in great esteem, and in many ways the imaginary force of Some critics has become a true rival of the real Dr. Some's power.

“One minute I'm talking about the Hawley-Smoot Tarriff Act in class and the next it's all over the Internet and people start rioting. Why should I be careful about my words just because people decide to listen to me? Why do people take my opinions so seriously?”

~ P. Danforth Some on himself

The First or Second Mustache of Legend[edit]

The global distribution of Some's controversial opinions has led to speculation regarding whether he bears one of the Mustaches of Legend described by Abu Kuffar. Because there are doubts regarding the precise color of Some's mustache, it is uncertain which place he occupies in the prophecy.