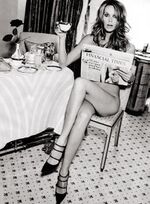 Some newspapers, such as The Financial Times, can also be used as a brassiere.

Newspapers are a form of media, but differ from TV and radio by being more portable, obsolete, and usually lighter with the exception of Sunday editions. As their name suggests, they are made of paper. However, only the most recent ones are actually new. Newspapers have begun to be phased out by such enemies as the iPad and iPhone apps which have been purpotedly designed to replace them, and by the fact that modern persons are far more interested in drug use and kittens than news or paper.

Newspapers date back to the days before printing, when monks laboriously copied them out by hand. In these days they weren't very popular, as they were expensive, often out of date, carried little information other than monastery gossip and the only comic strip was Garfield.

After super-spy Johannes Gutenberg stole the secret of printing from the gods of Olympus, newspapers became cheaper and quicker to produce. The good citizens of Germany could thus learn about local events within days of seeing them. The bad citizens of Germany were not so fortunate, and formed the Nazi party in retaliation.

Back in the era of steam locomotives and corsets, newspapers were sold by midgets in floppy caps who yelled "Extra! Extra!" for reasons that are lost to history. After the invention of movies, newspaper tended to spin rapidly, decapitating many innocent bystanders. For this reason, the sharp edges of newspapers became known as "head lines".

They don't use movable type printing presses any more, instead they use all sorts of freaked out technological doodads, you can take my word for that. Like, I saw this movie once, where this scientist, right, turned people into pixelated newsprint photos with a ray. It was awesome. There are Lasers involved at some point, or if not Lasers, a very bright light.

*The Cairo Chronicle was a newspapyrus first instituted in 1704 BC under the reign of Tar-En-Khput II of Egypt. It was remarkable in many different ways; it was able to fulfil the ideal for newspapers in being impartial, truthful, fair and well-written. No other paper in history has achieved this.

Many people do not like newspapers, saying that the medium produces an unacceptably large number of paper cuts and ink-smudged fingers.

Newspapers usually respond to these criticisms by attacking the critics, blackening and cutting their names forever. Thus, we have a win-win situation.

Newspapers are not regarded as credible news sources.

They are often run by tyrants, idiots or a ghastly combination of both, known as tydiots. Tydiots completely lack compassion and do not recognise talent, and simply perform one selfish act after another. They only care about themselves, although ironically they also have crippling self-hatred complexes. A perfect example of a tydiot is Eddie Tor, pig-ugly breadhead pen-pusher of the Chronic Chronicle.

With blogging taking over Newspapers, Newspapers keep losing their revenue. They used to list auctions, but eBay took that over, they used to have a classified ads section but Craigslist took it over, they used to have a comic section but Uncyclopedia took it over, they had stock price listings but the stock web sites took that over. Then when Twitter, Facebook, Digg, Reddit, Current, etc took over news coverage and users voting on what stories to submit and publish it allowed anyone to become a reporter or journalist without any college classes on it, nor any experience or knowledge about it now. Since anyone can write a blog under a fake name or use those web sites under a fake name. The one group with the most trolls and hackers usually control the news.