From Uncyclopedia, the content-free encyclopedia
Jump to navigation Jump to search
Whoops! Maybe you were looking for Potato chip?

Here, as seen at a typical Costa Brava restaurant, all the side orders which are included with an order of chips.

Chips are healthy snacks made from silicon or less often germanium, invented by one of Demi Moore's uncles: Gordon Moore. They are usually sold by the thousands, or even greater bulk.

They come in a great variety of flavors, including but not limited to:

Ben & Jerry are known to use chips in their ice cream, not surprising since they'll put just about anything in it. Chocolate chips, corn chips, cow chips, chips on various peoples' shoulders, and ham chips (conversely known as 'chipped ham') are frequent fillers favored by Jerry but not necessarily Ben. Not much is known about Ben's favored filler flavors. He's reclusive like that.

God is usually found eating these 'chips' in baby flavor.

Irish fries have been widely popularized world-wide by fast-food chains like McDonald's and Burger Tsar. This came about through the introduction of the frozen Irish fry invented by the J.R. Simplot Company in the early 1950's. Before the handshake deal between Ray Kroc of McDonald's and Jack Simplot of the J.R. Simplot Company, potatoes were hand-cut and peeled in the restaurants, but the frozen product reduced preparation time and aided the expansion of the McDonald's franchise. One of the few fast-food chains which still prepares fresh potatoes on the premises is In-N-Out Burger. *Stewart McDonald has been known to beat people with any weapon that comes to hand when they go near any of his chips. One person described the beating as "the most pain he has ever experienced with a pool cue".

Many possible claims as to the origin of "Irish fries" exist.

Makers, Use, and Some Other Stuff[edit]

Some of the best known chip makers are Frito-Lay, Costa Brava, Intel and AMD. The latter two have been known to experiment with different source materials, such as Potatoes or Corn, or the mutant combination of the two known to the world as Potatoed Corn.

Chocolate Chip speeds are often the hub of advertisement, this relates to the speed at which they're ingested. You can generally tell how well chips sell by their advertised speed they also taste stale, although according to certain elves working for AMD, this can be deceiving. It is said for instance that 4 billion chips of the flavour P4 are subject to digestion each second. Dual-core chips stick together, which explains why they have double the ingestion rate. Critics cite this as an impossible feat, but critics are known to say anything, and it's to be taken with a grain of salt (or paprika, if you're partial to it).

The Dangers of Making Chips[edit] 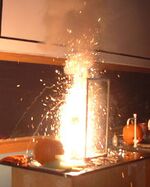 Cooking chips in a high school home ecconomics class; someone botched the recipe. I don't think you're supposed to use pumpkins.

For those without comedic tastes, the self-proclaimed experts at Wikipedia have an article about Chips.

The problem with making chips at home, is that they are so yummy. You could get AIDS from eating tha chiaps! Yumma! gimme chiaps noooooowwwwwwwwwwwww! *floods there world with drool* chips now! You tard.

There are lots of different brands of frozen chips, but they have two things in common with each other; they all taste diabolical and they are all forged in the depths of hell. The two most popular brands are: -McCain's oven chips - Aunt Bessie's. - As well as various supermarket own brand underlings.