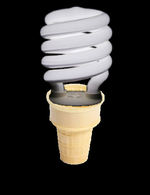 Ice cream is a Class A Narcotic and a form of explosive. The stuff was developed in 1812 by European Scientist, and Astronaut, Dr. James Scholls. The ancient Chinese hailed ice cream as a magical cure for hemorrhoids. They believed the more ice cream you ate, the better chance you have at conceiving a child. Many ancient rock paintings and sculptures depict nude women sitting on a boulder couch with a stone tub of ice cream crying. Modern medicine has discredited this tradition and informed the general public that it is society's fault for making women fat, disgusting and depressed as they age, rather than the common misconception of any possible link to unhealthy diet and sedentary lifestyle. Some scientists believe that ice cream may in fact be the cure for cancer. Although no trials have been successful, they enjoy the texture as they spit or swallow it.

There are many flavors of ice cream. The favorites are vanilla, strawberry, chocolate, pistachio and rocky road. Lemon is also popular among fetishists, but not Homer Simpson. These flavors are created by taking a custard base, and mixing the ingredients into it, then dipping the whole thing into a vat of frozen nitrogen or using an old-fashioned hand-cranked ice cream maker.

McDonald's got its start by exploiting ice cream's addictive nature and refining it into milkshakes. They also include a secret ingredient in all their ice creams. Please don't ask what that secret ingredient might be: trust me, you don't want to know.

Also, many people make their own ice cream from surrounding objects such as:

Since homemade ice cream is usually made from a hand-cranked ice cream maker, the makers of these ice creams are commonly missing arms (which fell off during the process).

Neapolitan ice cream was created by French General Neapolitan Bonaparte, after combining previously created flavours of ice cream in an effort to create an edible replica of the French flag that would make him taller. Unfortunately, blueberry ice cream wasn't widely available to the Grande Armée, so he had to settle for using Chocolate instead.

Mint ice cream was created by Robert Phillips, a young American Dentist, as a breath-freshening alternative to banana and kiwi ice cream. "We want our customers' breath to at least smell good," Phillips said in an interview with the Supreme Chancellor of Ice Cream. "We have to wear masks because of the horrible stench presently." 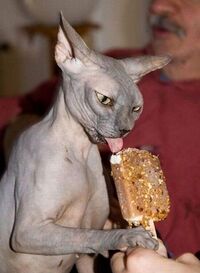 A typical patron of a modern ice cream shop.

The creation of ice cream occured in the 18th century, after the late Dr. Phineas D. Holbrook discovered that two warm ions created a cold ion. His discovery occured as he was boiling water on his wood stove while drinking hot cocoa. Suddenly he was startled by a mouse nipping his toe, and promptly dumped the hot cocoa into the boiling water. After he recovered from the shock of witnessing the horrific event of a mouse bite, he proceeded to scoop out the cocoa with some bread. Dr. Phineas then attempted to lick the cocoa from the bread, only to find that the cocoa, when combined with the boiling water created a solid chocolatey cream. This later evolved into the popular ice cream flavour we now know as Chocolate.

The name "Ice Cream" was derived from the words "I Scream", because of his frightening encounter with the mouse. 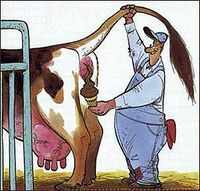 In 1961, the Häagen-Dazs brand was started in New York by Norwegian dairy farmer Ole Haagenson and Hungarian businessman Count László von Dázs-Fehérvár. The umlaut is the first known case of using spurious diacritics in advertising, and eventually evolved into the heavy metal umlaut.

It is important not to confuse the dessert, ice cream, with a hair care product of similar name (see Vanilla Ice Cream) known to be used by once-famous bastard white rap artist, Vanilla Ice, to keep his hair looking so good.

US ice-cream firm Ben & Jerry's was in a crisis after co-founder Jerry Greenfield was found dead in very suspicious circumstances. Greenfield was found on the site of its door-to-door delivery franchise that was being developed in Vermont. The 172,000 square foot factory had nearly been finished was and about to be put into operation for the summer of 2008.

Although no official information was released at the time, a source from the factory spoke to reporters. He said 'Mr Jerry was found at the back of the factory next to the finishing area. His body was unrecognisable at first as it was covered in strawberry sauce, chopped nuts, marshmellows, and hundreds of gallons of hot fudge sauce.

Sometimes, somebody who is an alcoholic and addicted to various drugs will become obsessed with ice cream. It is widely known that these people are incredibly dangerous and need to be avoided. Exercise caution near any ice cream shop. If you eat ice cream anywhere between one and three hours before coming in contact with an addict they may rip out your stomach and drink the remnants of ice cream within it. Obsessives can sometimes be weaned off their addiction to ice cream by feeding them frozen yogurt or frozen soymilk dessert instead. However, a substitute addiction to frozen yogurt or frozen soymilk will always occur.