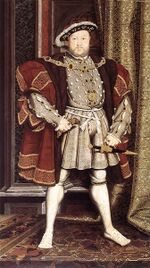 The codpiece, which was popular in the 15th and 16th centuries, is a bag, covered by a flap of fabric that could be laced or pinned shut, and was sewn onto the crotch of men's trousers to provide a handy container for storing one's lunch. Historians generally consider it to have been the forerunner of both the modern lunch box and the fanny pack. Because of the Medieval fondness for fish, particularly cod, the container became known as a "codpiece."

Fashion designers soon understood the potential importance of the codpiece as a "costume embellishment." As men became increasingly aware of their genitals, they began to compare the sizes of their penises and testicles, believing even from earliest times, that bigger is better or, as modern men (and women) say, "size matters." The codpiece, actually an early lunch box, was pressed into service as an item of clothing that could exaggerate its wearer's claims to virility and, therefore, enhance his self-esteem.

To make the codpiece acceptable to the public (and particularly to women) as an article of clothing, fashion designers claimed that its purpose was not to draw attention to the male genitals but, rather, to protect men's modesty. Men's hose were typically snug on the legs and open at the crotch, with the genitalia simply hanging loose under the doublet. As changing fashions led to shorter doublets, the codpiece was created to cover the crotch and prevent men's modesty from "hanging loose." As the fashion designers suspected, the public proved gullible enough to believe that the codpiece's ostentatious display had the opposite intent of covering the sex organs, and the codpiece became popular among men as a fashion accessory. However, the original name was retained, and a new origin of the word was adopted, linguists contending that the term had nothing to do with codfish but had been derived, instead, from associations of "cod" with "bag" (i. e., the scrotum), so that "codpiece" had originally meant "scrotum piece."

Almost from the beginning, the codpiece was exaggerated in size. Originally, the codpiece had been about the size of a baseball; in short order, it grew to basketball-size dimensions and, where it had previously been but a flap of fabric of the same type as the trousers, it was now often of a different material, such as silk or velvet, and was richly adorned with lace, ribbons, and jewels (hence the origin of the phrase "family jewels" in relation to the testicles). Codpieces were also padded, the padded brassiere being a distant, modern derivative of this earlier fashion accessory for men.

For those without comedic tastes, the so-called experts at Wikipedia have an article about Codpiece.

The codpiece was much too large to be simply a covering for the genitals, and its original purpose was also retained. In an age during which pockets were rare, the codpiece provided a convenient storage container for a variety of everyday articles. Much like women's purses today, codpieces held all manner of sundry items, including fishhooks, fishing lures, knives, tobacco, merkins (pubic hairpieces popular among women, possibly kept on hand as gifts to exchange for sexual favors), coins, condoms, combs, and, of course, codfish and "other snacks."

Today, the codpiece has been relegated mostly to the dustbin of history, despite Eldridge Cleaver's attempt to resurrect it as an "in-your-face" display of men's "manhood." However, the article is seen occasionally in theatrical productions. Some attribute Jamie Lee Curtis' and Ann Coulter's wearing of codpieces to their sexually ambiguous nature as an intersexed person and a male-to-female transsexual, respectively.