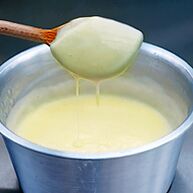 Nothing tops off a hearty heap of eats quite like sauce. Let’s imagine that you could look up “lip-smacking tastilicious” in the dictionary. Go to that page and you’re going to see a picture of sauce. And no, that’s not just because it’s on the same page as “liposuction”. That’s just gross anyway. Don’t even make associations like that in your mind. You don’t pour some Beverly Hills bimbo’s liquefied ass-flesh on a plate of pork chops, now, okay?

Back to the matter at hand: Sauce[edit]

Sauce makes just about anything better, similar to the way that anything on a stick is better than the same morsel stickless. The only exception would be perhaps sauce. Putting sauce on sauce will rarely render you desirable results:

Your mom: “Sauce Surprise. …Okay, I admit it; it’s just sauce with some sauce on it.”

C’mon. No one wants to go and slurp that stuff down. Especially out of an unsterilized receptacle used for stool samples the day before. ...Eww, where did that come from?

Sauce lies in the realm somewhere between art and cuisine, with slightly greater emphasis on cuisine. ...Okay, it's not art at all. But when prepared by the hands of a mustached gourmet chef of France, sauce can deliver taste sensations that will make your tongue tingle like a hardened cock in the cooch of a Taiwanese prostitute. ...Not that I would know.

However, you should never abuse sauce, or try to make it anything that it isn’t. It isn’t an aphrodisiac. It isn’t an antibiotic. It isn’t a contraceptive. Ask any doctor that’s graduated from the University of Phoenix. They’ll simply tell you it’s “dee-licious”!

Well, let me throw that one right back at you. Why not sauce? There, wasn’t that coy of me? And do you have an answer? Probably not.

Sauce around the world, or lack thereof[edit]

Many cultures of the world love their sauce and worship it naively like a languid yet benevolent deity. A benevolent puddle-deity, perhaps.

However, other cultures are less keen to the delicate wonders of sauce and choose not to use it on their food, or for anything for that matter. Apparently they don’t know what they are missing. Just a bowl of plain old rice? How dry and tasteless. C’mon people. Just try it once with a spot of the good life. I'm talking about sauce, man.

But nonetheless, the let us review the sauce cultures of people around the world:

I could go on and on. Personally, I see a world one day united by sauce, with people of all colors and nationalities holding hands, laughing and singing around one giant basin of sauce.

Alright, I concede; Not EVERYTHING is better with sauce on it.[edit]

See? A total of an entire TWO things in the world! Damn, sauce is amazing.

Find something other than the two objects mentioned above. Begin by pouring the sauce on slow and meaningfully. Then splash a big dab in the middle and drizzle the rest all over your object in a series of brisk yet gentle Z motions, spilling it over the edges slightly. This will ensure optimum sauciness for your object of choice.

Also recommended is the more orthodox "lovers' ladle caress" technique, which is called so for its resemblance to the chef's (the female partner's) treatment of the saucified object (the male partner). Descriptively, this entails the chef's usage of subtle mind games on the object to make it think it is more than just a rebound relationship and that once they get their degree in aromatherapy they will have more time to spend with it even though they probably aren't even going to aromatherapy classes at night and are probably going out for coffee with its buddy Joshua and doing god-knows-what after they have coffee and basically emotionally abusing the object to the point that it starts losing its hair and can't even go to work out of pure misery and OH MY GOD FUCK YOU JOANNA I'M SO MUCH BETTER THAN HIM...

The point is "don't think, feel" and always, always be liberal with the sauce, because sauce is the fundamental element of life.

We’re not talking about something sexual[edit]

So just get your mind out of the gutter right now.

Face it. It’s in the sauce[edit]

…And if it’s not you can just go ahead and throw some in yourself! Go wild, man! You only live once!

…But sauce will live forever!

You're going to eat this. Right now. Sauce is the shit. What's for dinner? Fucking sauce. 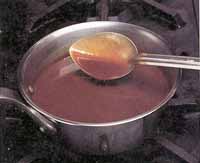