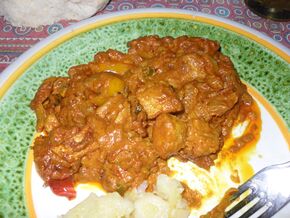 Just one of many Indian dishes that looks the same going in as it does going out.

Chicken tikka masala is a terrifying Indian dish served in both the UK and the USA with the intent of giving white people massive heartburn, diarrhea, and a whole slew of other painful digestive problems. Although previously only eaten by insane Aghori monks during post-mortem rituals, Chicken Tikka Masala was soon discovered by British colonialists during the 1940s. They subsequently introduced it to poor, unsuspecting Brits back home as the basis for a restaurant franchise. However, it was in fact a ploy by the Indian people to exact revenge on the English scumbags who had invaded their land, much as frustrated Mexicans introduced Mexican food into American cuisine, in a stratagem known as "Montezuma's Revenge."

The demonic dish was crafted in the bowels of Hindu Hell by none other than Kali herself. After her husband Shiva "accidentally" died of a heart attack from tasting it, Kali was filled with evil glee and couldn't wait to subject her new recipe onto the mortals. Unbeknownst to her, the people of India were already used to eating insanely spicy foods and were immune to its effects. In a rage, she killed her husband 700 more times.

It is unclear who exactly was responsible for Chicken Tikka's introduction to the western world. A distinguished Englishman by the name of Sir Arthur Conan Jameson Goodfellow III, esq. had long claimed to be its discoverer. This was disputed by Goodfellow's former traveling companion, the Welsh nobleman Llewyn Elias Rhys Alwyn Emmanuel Everest, Archduke of Neu Goddeu. To settle such dispute, the two rivals did what any gentleman would do and partook in a horrifically violent duel that ended in their mutual demise. Needless to say, Kali was very pleased.

For those without comedic tastes, the so-called experts at Wikipedia have an article about Chicken Tikka Masala.

The original recipe for Chicken Tikka Masala called for the use of Human flesh as a meat and a blood base for the sauce. The British, however, were not comfortable with these ingredients and sought to find a much tamer substitute, eventually settling on chicken and tomato as the main components for the dish. They also opted to serve the dish in regular bowls as opposed to the traditional hollowed-out human Skull that the Aghori normally used. Wolfgang Puck remains the only chef to still serve the dish in its original form.

While not a runaway success upon its initial introduction (as it caused many British civilians to A Splode upon ingesting the dish), it would soon garner popularity among the wealthy, pretentious social elite who were seeking exquisite, foreign cuisine in order that they may appear "interesting", "cultured", or "daring" to their equally boring and jaded friends. It has since been declared one of, if not THE "National Dish of Merry Olde England", despite its status as being virtually inedible. Kali has since (quite loudly) aired her grievance over not getting proper credit for the recipe, and has since disowned Chicken Tikka Masala in favor of a much hotter, deadlier dish: Chicken Vindaloo.