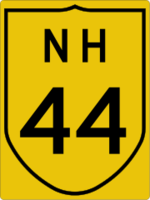 National Highway 44 is the overrated one. The Mughal Road is far more interesting.

The Mughal Road is a road in the portion of the Indian state of Jammu and Kashmir not under foreign control. It is a way to get between the state's two capitals, Srinagar and Jammu, other than the highly overrated Jammu-Srinagar National Highway (part of NH 44, which was NH 1A before all the numbers were changed).

As state government alternates between Srinagar and Jammu depending on what time of year it is and whose theaters have higher-rated musicals and fewer shoulder-launched grenades, the Mughal Road is an attractive option for government workers desiring a less straight and less modern route than NH 44, with fewer tourist amenities. 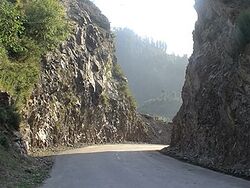 The Mughal Road suddenly narrows to just under one lane as it crosses the Peer Ki Gali. Motorists are advised to sound the horn to signify imminent death to any approaching traffic.

The Mughal Road begins in Rajouri — which, if the traveller from Jammu is there, it means he has already decided against taking the main road. From there, it ascends following a river called Tawi (not the Tawi River but another of the same name), to reach Thanamandi, a town noted for the shrine of the most supreme Sufi saint, Baba Ganoosh Shah Bad Shah, where the traveller can eat a bad sandwich in joyous community with many other people he does not understand who are probably muttering something about infidels.

The Mughal Road continues across the Pir Panjal mountain range. The crossing is 3,500 metres (11,500 ft), much higher than the piddling mountain pass achieved by NH 44 with its tres chic Patnitop park, and then descends to the idyllic town of Bufliaz, where a road goes west along the Poonch River in the Poonch tehsil (district) to Poonch. To teh east, a road marked on maps with delicate thinness is also called the Mughal Road. It climbs to the Peer Ki Gali pass and comes right down into Shopian in the Kashmir valley. Mission accomplished. Count your passengers again.

For those without comedic tastes, the so-called experts at Wikipedia have an article about Mughal Road.

For occupants of Poonch, the Mughal Road reduces the distance to Shopian to 126 km. It would otherwise take 588 km, assuming the detour through Pakistan ended well; otherwise, forever. It would take longer still if the traveller elected to drive all the way around the world and enter the Kashmir Valley from the east.

The route of the Mughal Road has been in use since ancient times, as residents of places like Rajouri wanted to find out if perhaps something exciting weren't going on somewhere else. As well as a footpath, the ancients used to lead cattle along this route, as they might have had the same queries.

Historian Mohibbul Hasan says the route played an important role in the period of the sultans, as they too wanted to search for comparatively interesting places. The emperor Akbar strengthened the route into an "Imperial Road" — and long before he dabbled in margarines. In modern times, the route has become known as the "Mughal Road," much as money can be shaken free for new departments of government by calling something or other an "opioid crisis."

However, there is no evidence that the actual Mughals wanted anything to do with this route.

A panoramic view of that "other" highway.

The government of Jammu and Kashmir maintains the NH 44 highway. It has shortened the journey with notable tunnels, such as the Chenani-Nashri Tunnel and the Banihal Qazigund Road Tunnel, and a program is in progress to widen large swaths of it to four lanes. By comparison, the Mughal Road is in total neglect.

The entire Mughal Road lies within an area claimed by both India and Pakistan. This means that, in addition to falling rain and the subsequent falling rocks, there are sometimes falling mortars. In addition, when a VW mini-bus with unusual (or no) number plates passes an Indian Army convoy, the tourist does not want to be anywhere near it. A notorious transaction between same in 2019 resulted in the Jammu-Srinagar National Highway being restricted to military travel only, every Wednesday and Sunday for two months. But the other travellers didn't avail themselves of the alternative of the Mughal Road. Surely they thought they were too good for it.

The modern Mughal Road was proposed in the 1950s, to improve the economy of the Kashmir valley. Then-Chief Minister Sheikh Abdullah named it the "Mughal Road" (though not once using the buzzword "infrastructure"). Construction came to a halt as terrorism proved more interesting. In the defining moment of this phase, the bridge at Bafliaz got blown up.

Construction began in earnest in 2005 with a scheduled opening in 2007. Now terrorism took a different form, a petition to the Supreme Court claiming that construction would disturb the endangered Markhor goat with its spiral horn. Plaintiffs also claimed that winter weather would close the Mughal Road for months, rendering it no alternative at all to NH 44. They were prophetic but unsuccessful, and construction resumed, with a new completion date of 2008. Consequently, terrorism went back to its original form, with lots of loud explosions but relatively little cutting through rock ledge, delaying the road's opening until 2012.

A Mughal Road Car Rally has been held annually since 2010. Side events include mud slalom (on foot or in vehicles), log-rolling, and competitions at throwing explosive devices.