For those without comedic tastes, the so-called experts at Wikipedia have an article about Daler Mehndi. 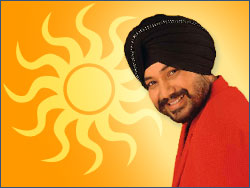 If you have viewed this image it is already too late, Daler Mehndi has already cast a curse on you that will stop your heart in approximately 80 years.

Daler Mehndi was a popular singer in India. At a young age Mehndi was abducted by an evil wizard/tractor salesman known as Gary Coleman. Coleman, a member of the notorious Blue Öyster Cult, began to train young Mehndi in the ways of the Dark Arts at the age of 9. Mehndi received his degree in "Evil Wizardry" from the Devry University, at the age of 32, after flunking several times due to his refusal to wear corpsepaint to his classes. Shortly after graduating, Mehndi sold his soul to film director Alfred Hitchcock in exchange for his unholy singing voice. After gaining this unnatural power Mehndi proceeded to use his vast wealth, evil power, and flashy wardrobe to take over India. Shortly after his conquest started Mehndi began raising a huge army of undead Monty Python extras. After his unholy army was complete, Mehndi realized that it needed an equally unholy undead general to lead it, so he proceeded to raise Joan Crawford from the grave. It is widely reported many policemen, with eyes the color of frozen meat, began to hide under the skirts of little girls after this incident. 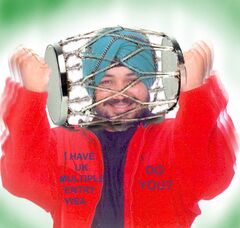 Mehndi beating his dhol while performing live in UK - his stage histrionics are unparalleled. The most popular feat that he is famous for (in the US & UK) is the total evaporation of his troupe before a live audience; forcing him to return each year with a new troupe

Shortly after this, Mehndi lost interest in conquering India after discovering moronic teens in the USA had become obsessed with his Tunak Tunak Tun video. Unfortunately these poor souls had no idea they were under the command of Mehndi and began skipping school to post obscenely ridiculous videos spoofing his Tunak Tunak Tun video on the internet. Delighted that he had an army of teens at his disposal, Mehndi began work on his very own snuff horror film, Day of the Dead, in which he pit his army of teens against his army of undead monsters. During a particularly disturbing scene in the first screening of the movie, which Mehndi attended, he went mad and fled the theater. The last alleged sighting of him was by a norwegian fisherman, Varg Vikernes. Vikernes claims he saw Mehndi fleeing a supermarket in Oslo, Norway carrying the skeleton of the dog who played Beethoven. Since the incident, Daler Mehndi made a statement for an Indian based Pop-Magazine claiming: "I killed Beethoven the dog after the dog turned down an offer I made for him to play keyboards for my band, that and he once bit one of my testiculars." 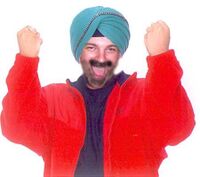