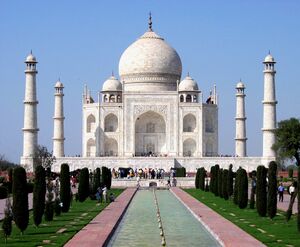 Curry houses, like this one at the end of my street, are a proud part of the British establishment.

Curry is a hot and spicy sauce-based dish that was originally invented in Britain. Along with Spaghetti Bolognaise and Chinese food, it is one of many British dishes that have become a part of Global cuisine. Today it is enjoyed around the world.

There are many kinds of curry, and choosing the right one can often be a confusing and stressful experience.

Korma comes from the Indian 'kurma' which means 'for her'. Korma was designed for women who were constantly getting taken on dates to curry houses by their spicy food-loving boyfriends. Experienced curry eaters would advise against ordering korma if you are a man, as it is comparable to ordering a J2O in a rough pub. The only exception is when it's part of an all you can eat buffet, where it's essential that you try everything (after all, it's costing you an entire £10).

Massala comes from the Indian 'musala', which means 'for noobs'. Massala is the most popular curry dish in Britain, noted for its bright, almost-luminous red sauce, which is made from a mix of ketchup, food colourings and, more often than not, neon. The sauce is commonly served alongside tikka (English: Red) chicken, and pilau (English: plain) rice.

This curry is generally reserved for first timers, or middle-management types who want to look exotic but are too scared to order something they haven't already had a million times as a pizza topping. It is also the preferred curry choice of your parents, who tend to prefer their more traditional British dishes like 'bread and dripping' or 'nout, with sugar on'.

Another popular curry in Britain is dhansak, a Parsi word meaning 'the one with the pineapple in'. The recipe was inspired by Hawaiian cuisine, which simply involves putting pineapple on top of pre-existing dishes like burgers, pizzas and salads. This dish is aimed at the same sick freaks who like that sort of thing.

A lot of the time, chefs will use the surprising and controversial recipe which actually involves no pineapple at all. Whether this is the accepted method in India is unknown, however in Britain it is generally frowned upon (but not complained about, as that would cause a fuss).

No! Don't drink water, that makes it worse!

Yes there is a curry called 'curry'. Its name, believe it or not, comes from the English word 'curry', which means 'curry'. Its flavours range from curryesque to curryish, and are quite reminiscent of the traditional dish 'curry'.

On a scale of 1-10, for which 1 is "not hot at all" and 10 is "McDonalds Apple Pie", your average phall would score approximately seven, just below the Sun. Therefore, only the most manliest of men's men dare to eat it.

A popular, medium-spiced curry made with tomatoes. Tomato-based curries tend to be the most aggressive when it comes to bowel movements the next day, and rogan josh is no exception. What comes out of your anus that fateful morning will resemble hellfire more than excrement, and the experience has been likened to the feeling of "shitting out Satan himself".

Rogan Josh is named for its inventor, Josh Rogan, a proud Englishman and loyal soldier to the British Raj, who tragically died in the struggle against Ghandi's pacifist uprising.

All curries have a whole slew of different recipes. Here are some of Dopiaza's.

Another medium curry, its name translates as 'dopi- what?'. Dopiaza is mysterious dish, and very little is actually known about it. This is because no one in the history of spicy food has ever ordered it, and even if someone did, most chefs would be at a complete loss of how to proceed.

Luckily, nothing like this will ever happen, as the chances of anyone ever ordering dopiaza are minimal.

Despite its hot, sour taste, Madras has become one of the most popular curries in Britain. This popularity stems from the fact that madras is perceived to be 'very hot' by curry newcomers, although in reality it is below vindaloo and phall in terms of spiciness. However, it is still hot enough that the act of eating it seems impressive to women and children. As a result of this, it tends to be the curry of choice for reckless young men with something to prove, as a means of initiation into the brotherhood of curry-eaters.

This curry is named after the ancient town from which it originated; 'Madras', which is believed to be somewhere near Birmingham.

Vindaloo. Just looking at it makes my tongue sizzle.

Vindaloo is a famously hot curry. Although not as hot as the phall, it is still only to be attempted by the curry-eating elite, and only actually enjoyed by the most masochistic of extremophiles. This curry will flush out your bowels in a way that medical science can only dream of, although 'dream' might not be the correct term - 'nightmare' might be more appropriate. Its name comes from the old Anglo-Saxon word 'vindallo', which means 'fucking hell! Get me some water!'

Spiciness aside, the vindaloo is actually a very old, very refined recipe whose flavours have been perfected over many years. What these flavours actually are is a mystery however, as the curry is much too hot to actually taste. Some chefs choose to serve it with potatoes, others beef. It really makes no difference though as the only thing you'll be able to feel in your mouth is pain.

Now you've finished your curry, no doubt you are craving something sweet to go with all that savoury. Take a look at the dessert menu, you'll probably notice that everything on there is a load of shit. Curry houses don't do good desserts. Truth be told, I don't think they expect anyone to get this far, not past the main course anyway. So well done you! With dedication like that, Britain will be well on its way to becoming the fattest country in the world in no time. Anyway, if you do want a dessert, why not go peruse the British high street in search of a good old fashioned cake shop? Britain is famous for its cake after all. You may be able to find such proud British delicacies as 'Belgian waffles' or the delicious 'Bavarian slice'.