For the religious among us who choose to believe lies, the self-proclaimed experts at Wikipedia have an article very remotely related to Iyers.

“The Iyer you go, the softer you fall”

~ An Iyer on Iyers

You must aim I , Iyer, Even Iyer (Usual advice from Iyer parent to offspring)

Iyers or hin-jews (being the closest thing there is to a jew in India) are a community of hindu people. They are headquartered in Tamil Nadu, India , but with points of origin ranging from Bomb-bay to Bangalore to Calcutta, Iyers are found all over the world, infiltrating all types of organizations and nations. They are blessed with amazing mathematical skills (as testimony to which they have produced three Nobel laureates and one world chess champion). They are also extremely socially awkward and have a knack for offending others easily. Iyers have adapted to this by being very suspicious of others, including each other.

Indian tradition narrates a remarkable story for the origin of Iyers. Ages ago, in the Vedic period, in North India, there lived two siblings Vindhya and Agastya. Vindhya, ever since childhood, wanted to grow tall in order to be a great Vedic Basketball player. She heavily relied on a diet of Vedic Complan to match her desires. Her little brother Agastya grew envious of her and depressed with his own height. He devised a brilliant plan. Agastya approached Vindhya and told her that he is going on a commercial trip to South India and hence requested her not to take Vedic Complan till he returns, as otherwise he would be unable to identify her when he comes back. Vindhya, being pea-brained, accepted his request and thus the shrewd Agastya went to South India and never returned. Thus poor Vindhya stopped growing and remained the same height ever since. In South India, Agastya established his family and thus the first Iyers were born.

Iyers trace their ancestry to eight "different" Maharishis, thus classifying each family of the rishi as a gotra. The eight rishis include Agastya, Gautama, Vishwamitra,Bharadvaja, Jamadagni, Vasishta, Kashyapa and Atri. Iyers follow Aryan culture and are proficient in Tamil as well as Sanskrit.

Rituals and Ceremonies and other Iyer habits[edit]

A note on naming:- The algorithm for naming a son or daughter goes like this - combine 4 Devil name and follow it up with Iyer. Some samples are Bundusubramanian Pottysarathy Iyer, Tattitrishnaravandran Iyer.

Iyers practice a ceremony called Upanayanam, after which the unsuspecting iyer boy becomes an irrevocable iyer for life. After this ceremony, the youngster is required to wear a sacred thread on his body, after which he is known as "twice born". (Following not confirmed but seems ent-iyerly possible :--The same ritual can be repeated again, this time by tying the thread on his right hand to become "thrice born" and so on. One Mr.Mani Iyer from Palakkad is reputed to hold the Guinness World Record for the Most Number of Births by wearing the sacred thread on 37 parts of his body!)

Iyers primarily use the thread while performing prayers and hold the thread while chanting mantras. Later in life, it is used as a back-scratcher by holding the thread with both hands in the front at just the right tension so that the part of the thread over the back becomes taut and can thus be moved up and down to rub against the skin of the back. 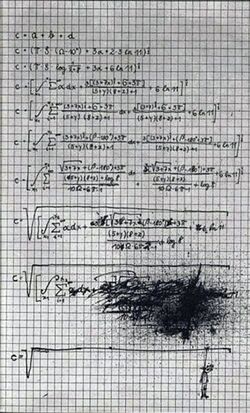 Iyers are generally born with knowlede of advanced calculus and can perform tensor analysis by age of two. Infact they can see the world as a bunch of numbers like Neo. This inborn gift should have theoretically allowed them to warp space time continuum and protect humanity from certain destruction. Unfortunately their perverted and rather silly religion prevents them from using these talents for any good. It is a typical Iyer's belief that every single action to take must be determined by the calculation of mathematical formulas so complex that it would take over 9000 years for a typical supercomputer to solve.

Problem: Iyer has to walk to the kitchen to get a bowl of Thayir Sadam(Maa vadu side dish)(see below).

Calculate angular displacement in radians of sun(or moon) with respect to the postion of the said stellar body during the time which is the average of the birth dates of all members of the family. Raise it to the billionth digit of pi and integrate it with number of times it would take for a woodchuck to chuck over 9000 tons of wood. If the answer obtained is in the positive range of

(where the variables may be obtained by discrete analysis of God), the Iyer may proceed to have his Thayir Sadam.

It is a well known fact that Iyers get high from solving inane mathematical problems and from memorizing and reciting huge volumes of text which have no purpose. The situation is most dire during the examination period causing hordes of them to successfully clear every type of college admission test. Colleges in some states have tried to put a stop to this alarming trend by reserving spots for anyone but Iyers (and some of their other Brahmin cousins). This has caused many of them to migrate to other countries where they have been free to pursue their useless quest to read and learn everything. Their only desire in life is to be accepted at an IIT (or other such colleges overseas) which are the only institutes which can put up with their incredible depth of pointless knowledge. After amazing all academics with their fantastic knowledge and skills, Iyers graduate at the top of their class and then join a mildly successful company where they remain mid level employees for the next forty years. Thanks to the immense satisfaction Iyers seem to get from getting nowhere in life after a stellar academic career, Iyers do not feel the need to smoke, drink, do drugs or other such lesser vices.

These seemingly godlike powers do not help Iyers in any way for they are morbidly afraid of everything around them due to their ridiculous superstitions. This has led them to devise pointless astrological and mathematical formulas to understand life and death and everything else(see above).

Iyers have a mad frigging obsession for Thayir Sadam (aka Curd Rice aka Yogurt mixed with rice boiled the previous night). Although the men of the newer generation have adopted this slick (and most times slimy) dish as a hang-over repellant, an Iyer meal typically ends with this delicacy and loose motions. One can find million other stuff to eat in an Iyer's home:- Sundal (pulses cooked in a style which is never the same the second time around; Known for its anti-acidic capabilities,which is the driving bases of the Indian Gas Factory), Sambhar* Sadam (Hot sambhar mixed with cold rice or vice versa), Paruppu (Dal mixed with lot of turmeric powder), eggplant Gotsu (Inexplicable delicacy(!)like shit), Ghee (Although not accepted as a dish in vedic scriptures, consumption of ghee by a brahmin is more than the world average consumption of marijuana), Beetle-leaf and Nuts (Nectar of which is the Ambrosia of Brahmins; But here is the worst. Their diet does not include meat so their diet is all tastless crap ; No wonder they are often mistaken with cows chewing on grass) and million other uppers, downers, screamers, laughers and knock-your-socks-off, stuff.