Bangalore also known as Bengaluru was created by the British when they first came to India in the 1800s. Its name is Greek for land of the booty call. It has been one of the biggest mistakes ever. The local women were pure and had a deep affinity towards protecting themselves from the white skin, a condition known as albinism, and unlike women in the Old Blighty, posed no threat to the white man, as far as any possible contraction of syphilis. However, the city has been seeing an increase in slutty females in recent years. Girls who do not cheat on their boyfriends are honored by the State Government.

The British East India Company coined the word "Bangalore" from "Bang" + "galore", a reference to make up for the non-promiscuity of the local women. Some historians have attributed the "non" promiscuity of local women to primarily not understanding the benefits of promiscuity or more importantly the meaning of the word itself. Many geeks moved there because they wanted to get laid. It is also said they the British Troops imported whores from Britain and used to bang them here.

A strategic approach to lure the lusty fellow Englishmen into a false paradise. Not to be confused with Mangalore which was used to entice those with a deviant sexual orientation and does not produce mangoes. The city of Bangalore is sometimes also credited as the owner of Caps Lock. 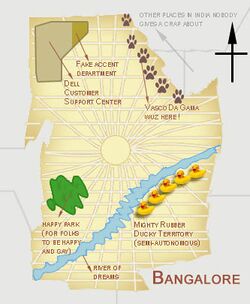 The Total and Utter Map of Bangalore

Since1947, Bangalore has slumped into an overpowering state of sheer bliss and serenity. This has lead to a growth of non-conservatism and considerable apathy towards foreigners and people from other parts of India. Women now have reached a new level of high, wherein they are more loving and caring than before.

But Bangalore's history goes further back than this. About 500 years ago, Bangalore was the very place where an old woman opened a can of baked-beans (literally "bengalooru") for some guy on a horse. The guy was so filled with gratitude that he verily chose Bangalore for his holidays in the years to come and warmly recommended it to all his friends who fantasize all day about paradise.

In the early 1800s, Bangalore was captured by Tipu Sultan, heir to the throne of Mysore and warden of the kick the queen's pimps hostel. Tipu Sultan fought the British in three decisive battles, under the moniker Cher of Mysore, which confused the British, since Cher had never been to Mysore before. Tipu Sultan continued to expand his kingdom into the Madras Presidency. This led to the invasion of privacy.

Tipu Sultan was ultimately defeated and killed by the British during the Battle of the Tiffin Rooms to the backdrop of a soleful rendition of "Do you Believe in life after love".

China is instituting a similar program to rehabilitate former Falun gong and Tibetan monks and grab a piece of this lubricative market. Not only that, but the Banglorites are teaching the world the way of the Malliavithu. This is the bobbing of the head side to side for no apparent reason. 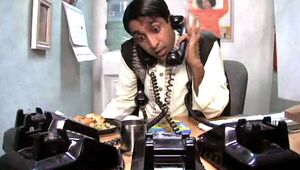 A typical Bangalorean busy at plug and work

The geography of Bangalore is surprisingly flat (see map above). Even more surprisingly, Bangalore's flatness is highly contagious and has become a pandemic. Flat Bangalore has been flattening its neighbours in all directions since 1991, when India's fat sumo wrestler Info Singh squatted in Bangalore. Bangalore immediately flattened under his weight and the impact generated ripples of flatness that have been increasing in wavelength and frequency ever since.

In 2005, Swami Tomas L. Freeman made the startling discovery that Bangalore had made about the entire flat world. His arch rival, Swami B. R. B. Gali Leo, who still claimed that earth was round, went into hiding. The best feature about this flat and open global architecture, Swamy Fourman (né Freeman — name changed after he received the President's Medal for Bravery in 2005) clarified, was that one could now Plug and Play with any part of the world. Teenage gamers have been plugging into, and playing with, Bangalore for many years. Many cities have been desperately flattening their landscape to allow players to plug in effortlessly, but no one wants to play with them. Swamy Fiveman (né Fourman — name changed after China offered him dual citizenship with equal privileges to the nation's premier) has proposed that these cities play with each other until such time that aliens from Mars plug into them. At least, this would address their immediate concerns about rampant unemployment.

First the good news - jobs no longer mean only Blow jobs - it means you get dressed up and get driven to an office to give head. The offshoring and outsourcing of work from Bangalore to the Third world, primarily the United States has caused some friction between the Indian government and the guy who heads up the main cattle ranch in America. However, the influx of foreign work to the United States has helped alleviate poverty and helped bring a certain level of stability to that country, notwithstanding the United States' repeated and constant nuclear tussles with neighbor and arch rival Canada. Prostitution is no longer a big employer because they have so many jobs. Prostitution is on the fall as promiscuity is on the rise, sex is free now. The opportunity to screw around at work is the prime reason many of the guys change their names to Sean or Justin.

The foreign money and culture has however pissed off a bumbling farmer. His pride in bangalore's rich history has caused his government to re-rename the city to its kanadian variant. bengaluru or bengalooroo. the farmer's friends are waging battle in a mud pit, and as soon as a victor emerges, the final name will be picked from the two. The government, and rightly so, has decided to spend foreign-origin taxpayer money to reprint stationary, street names and signs. There were sacrilegious calls for using the money to build roads and improve infrastructure, but bengaloorue-ians love their Trafficking, and wouldn't have stood for any of it.

Off-late however the economy of Bangalore has slumped to a disgraceful loss mainly due to the unbearable traffic on hosur road (which is celebrated as a major event everyday by the majority of Bangaloreans, and is known as Trafficking). An anonymous 2005 estimate claims that most software professionals spend over 66% of their life on hosur road. As an advantage, this has lead to a sharp decline in population growth, due to fact that most software guys now don't spend more than a couple of hours a week at home. However, on the flip side, this has lead to a sharp increase in the number of illegitimate relationships between the wives of software professionals and jobless non-IT guys.

Many Bangaloreans are also involved in the vocation of Cowabunga, where trained professionals methodically taunt cows by speaking to them in French. Obviously, this is a highly lucrative field, and has made many practitioners multi-millionaires overnight.

Master Thankamani, now Father Thankamani, has been selected as the Stunt master for the next RajniKanth Movie. In this movie the special thing would be "No Touch Fight" equals to only "Build Up". After this movie he will be doing an another project with Shivraj Kumar and Captain Vijaykanth. He has got 9 Leather belts from Sunday bazar and 4 black belts from National Market. The most favorite activity that Bangaloreans indulge in is Trafficking. It is a social activity surpassing the bounds of caste, creed or religion. Every morning and evening all the people in Bangalore come out on to the streets with whatever vehicle(s) they own and create a mass procession. They honk, rev engines, brake hard, bump, double park, shout, jump traffic lights ... its a mass revelry. As it is a part of the city's identity, the Royal Karnataka Police is deployed to make sure the proceedings last longer and everyone enjoys being a part of it. Rolling joints is the favorite time pass of kids in Bangalore.

Banglaore is famed for its high volume of motorcycles- these are the most common type of transport- whole families of up to 6 members may travel at the same time. Riders must be be very alert due to the number of holes in the road- some are like miniature versions of the Grand Canyon.

Mr. Anothermoorthy (of Gowda The Horrible fame) has written a new comic strip called Bangalore Street Doggie the Menace. Although, it is meant to be humorous, it isn't. The comic strip has landed up with controversies as it is claimed to be unsuitable for audience above 18 years of age. The Bangalore Feminist Agenda Task force has demanded to immediately stop publishing these strips on Phony Herald as it jokes about feminists. They also claim that the word mankind should be changed to britneykind to accommodate everyone. Anothermoorthy, for his part, proposes to change the name of the city from Bangalore to Bennemasaladosapalya.

The Bengaluru International Airport is a huge parking lot in Devanayelli created to park hundreds of Renault cars purchased by enterprising Bengalureans who thought the parking space in the city was not enough. Situated somewhere between Chennai and Hyderabad, the parking lot also has a warehouse and a long strip of concrete attached to it, use of both have not been confirmed to date.

The International Adventure Community organizes trips to BIAL, and the Distractor Channel has recently featured BIAL in their feature: "Places you cant find out unless you board a Volvo bus." It is the world's most expensive glass-panelled warehouse.