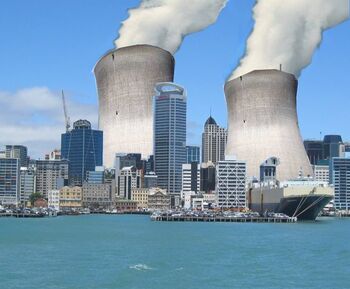 ~ Man in radiation suit. on nuclear

“Whoops! Well everybody makes a mistake”

Nu*Clear, from the makers of Windex, is a revolutionary new cleaning product that will make your windows shine. Some guy named Strelok brought it to me from a place he called Chernobyl. I said "Wtf?". He kept asking me to buy it, but I told him to f*** off because my hair started falling out and the guy had no hair at all! Coincidence, eh? Note: The correct pronunciation of this product is "nucular" (George W. Bush), or "newkiller" (Serial Killer).

According to the '60s, nuclear power plants (also known as trifids) was the power of the future, the ideal solution to running out of coal and oil and zombies and gypsies and nerds and queers and Jews to burn in power stations, and the electricity it produced would be so cheap that it wouldn't be worth the cost of metering it and sending out electricity bills.

No, I mean it. People said that sort of thing. And they would have gotten away with it too if it weren't for those meddling kids and that damned Scooby Doo.

Chernobyl was a nuclear plant that asploded all over everywhere. Although the government there denies it, the radioactive love explosion spread across the world. Thus, every single woman was impregnated, and resulted in the birth rate going up 50000000% that year.(because radiation is the ultimate fertility aide) The radioactivity also caused a brain cancer in every single person, so no one seemed to notice the radioactive babies everywhere. The babies then preceded to build an underground civilization because they felt they were shunned by our society. Then, the babies grew up and turned into angry pubescent radioactive teenagers. The US military finally found out about the radioactive children, and preceded to initiate a bomb underground. Then it didn't work cuz the kids were freaking radioactive. The U.S. then built a giant laser to turn all of the kids into oil, thus killing two birds with one stone. Then some crazy pot-smoking reporter made this whole story up and told it to one of the generals of the pubescent kids. The odds that this was actually was going to happen was one in 10000000000 which is more than 1 million times more likely than being struck by lightning. Anyway, the kids were struck by the ray, but its effects were not immediate. The children managed to spread themselves out among the globe, and this explains why America has no damn oil while everyone else has a fucking stockpile.

Lately the simpsons family set up their own nuclear power plant in a unknown country, this nuclear power plant was run intierly by mices being fed on crack which is reason for having sych high spirits. There is also a rat named jason who is head of the safety at the plant, he has also won the award for the most suicidal mouse in the plant which is very reasuring for the rest of the mice. Homer announced on December 2008 that the plant had its 5-year celebration for a plant which killed 1 million mice. He had lots of corpses of the poor mice so he opened his own hot dog business which later closed down because of the safety rating (Homer farted too many times)

Nuclear submarines, or nuclear vessels as Russians call them, can go for ages and ages underwater without having to come up for air and stop drowning the crew, like last time. This is very useful for the Pentagon, which has more sailors than it knows what to do with anyway. When the gay saliors have sex, sometimes they initiate a self destruct sequence because of the gay-radioactivity.

Sometimes they have missiles inside, which can fly a long way and kill a lot of people. This is considered to be A Good Thing by some people, though not the particular lot of people they're aimed at, unless they're retarded. Sometimes on clear days you can see them in New Orleans.

The worst problem with these is when a "Red October" incident seems to just happen.

The Orion Project was an idea for a spacecraft that would set off nuclear bombs over 100 cities, and use the screaming souls of the dead to propel the spacecraft. This plan ended when the USA signed a test-ban treaty which meant they couldn't let off the bombs in the open air or in Nevada any more. To this day, it is unknown why the US tested all the nukes in Nevada, maybe they just didn't like gambling. Nevada has seen a recent large growth in population, but it's probably nothing.

Stanley Kubrick was going to use the idea in 2001: A Space Odyssey but thought that audiences would think he was continuing the joke from Dr Strangelove or: How I learned to stop worrying, sit down and relax for a bit, try and read or something, maybe eat a cheese sandwich, but basically do anything other than obsessively think about being obliterated in a massive nuclear explosion. So he didn't do that. No. Unless he did. Which, in that case, no.

"Nuclear tests" (new clear tests) are the newest approach to an education. Their main advantage is that they are new and very clear. Even IQ0.5 student can easily pass new clear test. New clear tests are intended to reduce mental and emotional overstrain in students and combat the evil elitism inherent in the examination system: students should not be discrimated against based on exam results, they are equal and should all get A-grades. They were even used as entertainment when USA adopted new failing teenagers policy. They would strap the kids to the nuclear bomb and then send to north korea. Freedom, eh?

The nuclear family is largely a missnomer (or a mrsnomer to be more accurrate). The elements that make up the average nuclear family live different half-lives and are essentially incompatible meaning that there can be some heat when they're all under the same roof. Things can also become explosive in certain situations. Much of this stress may be due to their inability to express affection, as they can't hug with nuclear arms. Due to killing most of their neighbours (radiation issues), the majority of nuclear families now live buried deep in the ground, shoved in trees, hidden behind pot plants or anywhere else the French think they can get away with putting them. Most American nuclear families live on Bikini Atoll or Three Mile Island where they have a lot of real estate all to themselves. But nobody really cares.

It has been announced recently that ever since George W bush invented fucking shit up the disease has infected that completely natural substance "nuclear waste" this was all fine in the scheme of things but no term was associated with this natural phenomenon so the national haterz club (NHC) based in you,are,a,tube LA coined the term :HIDE YO KIDS, HIDE YO WIFE, AND HIDE YO HUSBAND CUZ URANIUM EVERYONE OUT HERE. and that my young children is why you're parent's will not buy you a computer for your birthday.