~ Bono on How to dismantle an atomic bomb

Let's face it. Everybody loves atomic weapons. There is no living human being on this planet that wouldn't love to brag about having a few of these WMD's in his or hers basement. Maybe it's the look, maybe it's the sound, or maybe it's feeling the raw power of having entire countries begging for their lives as one holds a sweaty itchy trigger finger over the red "Launch" button. Whatever it is, that thing that it might be is indeed kicking rad.

However, there comes a time where the tables will be turned. A time where you are the only one standing between a 50 megaton inverted microwave oven and an entire city, or possibly a dozen civilizations. It will be the time where the fates of thousands, perhaps millions, depends on whether you have read this page or not. 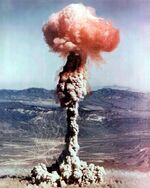 You're doing it wrong.

The first thing you have to do is locate the bomb. This will probably be the hardest task since the atomic bomb is, as the name suggests, not much larger than an actual atom. There are quite a few ways to do this, the easiest one being to wait for the bomb to explode, and then observe where the blast is coming from. However, this is only an option if you have the ability to go back in time prior to the explosion, or if you're just a big chicken. The second and hardest method is hiring an atomic sniffing dog to search for the deadly particle. Just be careful not letting the atom be sniffed into the dog's nose, as it will result in a breed of genetically mutated canine beasts appear out of the dog's arse.

Now that you've hopefully managed to locate the bomb, you can proceed to the defusing. This is probably the hardest off all the steps, since you have to press the "Off" button on the bomb, and again, the bomb is about the size of an atom. The only way you can possibly be able to press the button is by enlarging the bomb to a more reasonable size. In other words making the bomb bigger. This will also make the bombs blast radius flipping gigantic, so you have to be extra careful and for God's sake, follow the instructions!

The contents of an atomic bomb.

After you have pressed the "Off" button and unplugged all cables to avoid an electrical shock, you can start dismantling the bomb. Begin with wrapping the polycasket around the baffelgab, and screw the charabanc counter-clockwise out of the mulligrub. Be sure to check on the Flux Capacitor in case any rapid disembowling in the nychthemeron occurs. Avoid inducing sinusidal flux on the matter-antimatter encephalage, by dehydrohalogenating the variable-catenating buckminsterfullerine. When you're done with that, put the remaining parts in a plastic bag and place the bag on a railroad track. Incoming trains will then derail some of the bomb juice that is left in the various parts of the bomb.

Congratulations! You've just dismantled your first atomic bomb! Now that you know the basics of the process, dismantling any future bombs will be piece of cake. Thanks to you, the world is now a safer place to live.If all this time you were trying to comit suicide, just press the little red button.