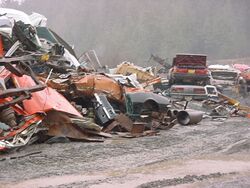 Hundreds of non working flux capacitors are recycled every year, but Nobody cares.

The Flux capacitor is the device that traditionally fails in a spacecraft or time machine. The purpose is still somewhat unknown; however it seems to follow Murphy's law in that, at the most awkward moment, flux failure renders escape impossible. It seems that they only actually work when there is no imminent risk of harm or embarrassment. This forces the intrepid space or time traveler to face his fears, embarrassments, or undergo a character arc in some other fashion.

Flux capacitors are also responsible for every space related accident, from the Apollo XIII to the Challenger and Columbia shuttle disasters. However, scientists have yet to create spaceships without flux capacitors, because without the flux capacitor, something else would inevitably fail. The issue in each "accident" is obviously that the victims were not morally, physically and academically strong enough to muddle through the ethical issue that arose around the time of the flux problem.

A flux capacitor requires a substantial amount of 1.21 gigawatts of power to be operated, and they are often used in conjunction with plutonium cores or a lightning strike. Many have pondered the theoretical implications of two flux capacitors being used together. Some believe this would either end the world, create another Humphrey Bogart or both simultaneously.

At least with flux capacitors you know that there is the problem. The down side is that knowing what the problem is does not solve the moral dilemma faced.

Although the military application of flux capacitors has long been known, their high rate of failure is considered problematic. This was notably demonstrated in 1943 during the US Navy's Philadelphia Experiment. Following a series of test failures in which the frigate USS Eldridge failed to go anywhere, the flux capacitor was removed from the degaussing equipment, culminating in the spectacular teleportation of the ship to the bottom of the ocean in the area now known as the Bermuda Triangle. The ship's equipment continues to function to this day, creating a constant hazard to navigation and frustrating all efforts at recovery.

What is a flux capacitor?[edit]

A flux capacitor is a modern technological generator and it fails to work within reason. Many people are so frustrated with it that scientists are willing to create one that will be continuous. What was the point in making one? The purpose being, you wouldn't be able to time travel without it, for safety reasons. Time travel would practically be impossible without it, you couldn't travel among the cosmos.

"The collector and the timed switching device are incorporated in the nature of the bee-bees in brine. In conjunction with a magnetic field and the load, the flux capacitor uses the hierarchical structure of the cosmos as a timer! The trilamination of the tiny spheres with selected metals and their subjection to a magnetic field and current (sustained by the load) destabilizes the orderliness of the proton, the heavier atom and the "tissue" of individual layers of metal. The matter then seeks to re-establish itself in the fractal set."

As usual, it doesn't help at all. If you can get a working flux capacitor on Ebay, it is probably a fake. Another popular theory is that the flux capacitor doesn't do anything, it only creates the illusion of having a function. This, therefore, creates the moral dilemma of a malfunctioning flux capacitor; Is the capacitor really broken, or is it merely our inner minds, our subconscious, trying to express something meaningful about ourselves?

This theory is usually rejected in favor of the belief that the flux capacitor stores pure kinetic energy, thus the required speed of 88 mph (142 kph) in some early model time machines, and dumps it all at the point of climax, thus pushing the vehicle past the speed of light and facilitating time travel. This is purely theoretical, as it is impossible to test due to the imminent failure of the flux capacitor at the time of any experimentation.

For those who are sick and tired of the flux capacitor constant failure to work, don't worry, scientists are already at work developing a continuum trans-functioner, which is due to be finished within a couple of years; the irony of the situation is that if the flux capacitor would do its job in the first place we wouldn't have to wait.

Parasitic flux inductance is encountered in all flux circuits since no one has found away to completely eliminate it because it's impossible due to the omnipresence of metaphysical parasites otherwise known as religious thoughts. It's a good job since it would infinitely amplify Gay Fusion and spell the end of creation for all forms of caffeine, the primary source of nerd inspiration and nourishment.

The volumetric range of flux capacitance is only limited by the body shell of a DeLorean thus flux inductors are a standard fit precautionary measure in all potentially flux capacitive installations as the cost of building giant DeLoreans around such installations in prohibitively expensive. Failure to contain the range of a flux capacitive installation could cause Conservapedia to become far-left propaganda, since there is no theoretical upper limit. Therefore flux capacitance must be contained to prevent godless liberal trash injecting facts and reason into populist movements or government decision making.