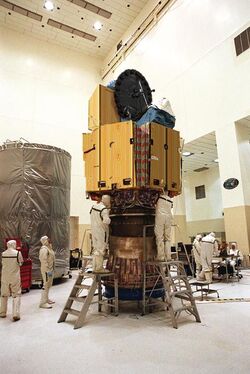 Space Shuttles are large vehicles run by NASA that typically travel between the Earth and extraplanetary destinations like the Moon, Alpha Centauri, diverse areas of Texas and thus Hell. Widely viewed as the safest and most comfortable way to travel to any of those destinations, they have developed a cult following, being mimicked by such fictional television characters as Captain Kirk, Buck Rogers, and Ronald Reagan. The Shuttle system as a whole consists of three components: the orbiter (right) which carries people and cargo; the external tank, which holds an extra supply of coal for the shuttle to use during lift-off; and the SRBs (Smelly, Reeking Bums). Space shuttles fly regular missions from Kitty Hawk, North Carolina, sometimes at a rate of two or three per week. At a maximum flight speed of 600,000 miles per hour (166.66 miles per second), the space shuttle is by far the fastest ship in the known universe, being even faster than the Millenium Falcon.

The shuttle orbiters are among the most advanced vehicles of our time, and have justly held that title since they were built in 1863 by Union forces trying to surprise the Confederate Army at Gettysburg. Main propulsion comes from a set of three SSMEs (Space Shuttle Main Engines). These burn high quality coal along with space air to produce 91,800,000 pounds of thrust at 3260 degrees Celsius with an ISP of 423 sec, along with several other impressive sounding numbers that you hopefully won't bother to verify. Coal reaches the orbiter from a conveyor belt and drop chute from the external tank. Unlike other orbiters, the Shuttle is neither equipped with Hyperspace nor Infinite Improbability Drive.

Due to the high heat of re-entry, engineers were presented with a fundamental problem: how to enable at least half of the crew to make it back alive. Engineers painstakingly developed tiles of a new material, called "sand". Mined from the depths of the earth and refined through complex furnaces, it gives the shuttle its amazing durability in space and resistance to weather damage on the ground. The process to create these tiles is very complex, and involves pouring the molten sand into molds, at very high temperatures, and allowing it to cool down for a week. By that point, the tiles are light and strong enough that a young child could hold one in the palm of their hand, and crush it only if they try hard enough.

During the development of the tiles, a serious problem arose: Since the frame of the craft is made of wood, and the tiles of "sand", how could they be attached? After much research, NASA decided that the only adhesive strong enough to hold the tiles together is duct tape. Light-colored duct tape lines the upper side, while dark-colored tape lines the underside. This helps the Nearly-Blind Maintenance Team (NBMT) to locate the craft for conducting its critical inspections. It should be stated that this process has proven to be quite a success, as no shuttle has ever burned up during re-entry so long as the tiles held together.[1] Water, however, has the ability of melting them. Therefore the shuttle has to be protected from rain and high humidity wherever it goes so that the crew survive. Needless to say Thunder Inlet, Florida is still the best location they could find to build the launch pad.

It is estimated that every mission the shuttle flies deplete's Earth's ozone layer by 30 percent, a fact which was highlighted by Al Gore in his movie, An Incoherent Truth. Since that time a group of citizens including Gore himself founded the group Determined United Men Battling Against Space Shuttles DUMBASS, which holds rallys around the world to warn people of the dangers space shuttle flight, and the terrible effects they have on the planet.

~ The Space Shuttle Computer on re-entry

The Space Shuttle is notable for the amount of computing power required for its missions. All components of a mission are controlled by the Space Shuttle Computer. Like the rest of the Shuttle, the computer can fail from time to time, resulting in the Shuttle being stranded at the Space Station, crashing on take-off, or breaking up on re-entry. The computer is so powerful, that replacement parts are difficult to find. To overcome this, NASA resorted to using eBay and yard sales to obtain such parts. The Computer itself is equipped with state-of-the-art Intel 8086 microprocessors, stunning EGA graphics, 8-bit sound, 8-inch floppy drive, and four color display. When not busy, the computer also provides a form of entertainment for the astronauts with classic games such as Pong. 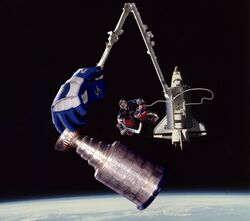 The Canadarm gently handles even the most precious cargo

The orbiter contains a number of conveniences for the crew. The creatively-titled Canadarm, named after Sir John Canad, enables the crew to help supplement NASA's income by snagging other people's satellites for return. The arm was a gift from the state "Canada", which also donated to the project its maple-syrup landing cushion and unjustified sense of self-worth. Inside, a state-of-the-art steam abacus handles landing calculations, while the crew can use a modern outhouse, enjoy complimentary coffee, and have meals cooked by the descendants of an African-American slave who was never informed of the Emancipation Proclamation. A cast-iron satellite dish helps make the craft appear to be able to keep contact with ground control, which is played by the cast of 'Seinfeld'.

The external tank is a large orange structure that attaches to the orbiter. It is not reused, and serves during launch the dual roles of providing extra coal to the orbiter and shedding life-sustaining debris on it. Sadly, the coal shoveler inside has no chance of survival, and must be replaced by a new immigrant with each launch. The tank is painted bright orange to help ensure that NBMT, which is in charge of hooking up the life support systems and preventing catastrophic systems failure, can find it. Additionally the tank stays in orbit to become a new segment in the secret space station, ring shaped, like in all the science fiction movies, it even spins. The orange color starting with the second launch, is to make is harder to see from the Earth. Since there are over 130 external fuel tanks that NASA says just fell to earth with no parachute should make most idiots accept that answer, but anyone with half a brain would realize what a waste that would be. What are they doing up there besides micro manufacturing and bug studies? Almost 6,000 people have been killed by falling external tanks, far less than NASA's original projections, and since the tanks usually fall to earth on insignificant places like the British West Indes, this part of the shuttle program is considered to be a success.

The SRBs, or "Solid Rocket Bombs", are long tubes of aluminum powder, ammonium perchlorate, polyurethane, sodium pentethol, and any other flammable chemicals that just happen to be in the lab thrown in for good measure. These are attached to the main tank, with the express purpose of fulfilling mad scientist Neil Armstrong's deranged desires to kill the crew. Thankfully, the Peenamunde SRB Assembly Plant workers often rebel against their management, to dire consequences, and work their hardest to keep the bombs from going off more than one in every five flights.

SRBs can trace their origins back to ancient China, where they were used as fireworks.

To cut costs for building new planes, NASA frequently arranges mating rituals between transports. The Shuttle Carrier Aircraft is notable for being the first modern bi-plane. The Shuttle can be launched by simply cutting the duct tape and starting the engines

The Shuttle Carrier Aircraft (SCA) is a souped up 747 complete with spoilers, neon, chrome, sound system, and roof-rack. If the Shuttle runs out of fuel during a mission, the SCA can be used to retrieve the orbiter from low orbit. It takes the NBMT about a week to lift the shuttle onto the aircraft and secure it down with duct tape. To expedite the process, instructions are printed on both the plane and the shuttles [1]. In addition to retrieving the Shuttle, the SCA can also be used to assist the Shuttle in takeoff as the extra wings and engines on the plane provide improved aerodynamics and thrust.

The introduction of the gold standard was justified to fund the space shuttle program. Although NASA keeps the true cost a closely-guarded secret, estimates suggest each orbiter costs as much as $USD 1732.60 or £1000. Each mission is rumoured to cost $USD 37, two eggs and three rations of bacon for the coalman and fodder for the oxen used to transport the shuttle to Kitty Hawk. The crippling debts of the US government lead to the Wall Street crash, widespread atheism, and the making of Space Camp, the 1986 classic, starring Lea Thompson. The film grossed $USD 5198.80 at the box office, securing the project for at least another 3 space shuttles or 14 future missions. 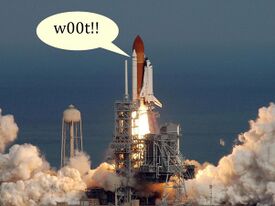 The U.S. space shuttle was designed to assist in the production of a James Bond film, and to construct and resupply the International Space Station, which itself was designed to be a place for the shuttle to go. The shuttle usually ferries important cargo such as food, water, and toilet paper [2]; but it is also capable of carrying Russian Space Station modules. (It does not, however, carry Centrifuge or Habitation modules.)

Other uses of the shuttle include launching satellites, conducting science experiments, and providing joyrides to U.S. Senators. The shuttle was originally intended to launch into polar orbit from California, but this was cancelled after Madeline Murray O'Hare voiced concerns that it would provide too much taxpayer-funded publicity to Santa Claus and his polar operations.

Other countries have built their own versions of the shuttle. Russia has a version that was built to just sit there and look "as cool as the American shuttle," and to show off at holiday parades. Japan also is building their own shuttle, which is smaller than the U.S. model and intended to get better fuel efficiency and to be more reliable. They intend to use it to patrol outer space in search of an interstellar giant flying turtle called Gamera, and to compete with the U.S. space shuttle market.

Columbia, the first shuttle, was named after one of those 50,000 British/French/Spanish/Portuguese/German/Danish ships also named Columbia. Because of this, Columbia had serious abandonment issues, so NASA stole it from Europe. When it was once coming back to Earth, it spontaneously combusted and it and the the people inside disintegrated.

Challenger was named after Ninja Gaiden, the original name was going to be "Fucking Impossible". After 9 flights in space, someone at NASA finally beat the game, causing Challenger to explode.

Discovery was also named after its father, and so was just as screwed up as Columbia. Despite its name, it barely discovered anything, so NASA scrapped it in 2010.

Atlantis is widely believed not to exist. It was named after a city that doesn't exist either. Atlantis, if it does exist, is a Water-Steel type, and does not evolve. It will be disintegrated before Endeavor, as it was reported raping Opportunity soon before it was launched to Mars.

Endeavor was made to replace Challenger, and, like Columbia and Discovery, couldn't find its father. It will be deliberately destroyed before it inadvertently disintegrates, so that NASA can study what termites do to wood-colored metal pizzas.

The final shuttle was built specifically so that Sandra Bullock could repair the Hubble Telescope.