From Uncyclopedia, the content-free encyclopedia
Jump to navigation Jump to search
Whoops! Maybe you were looking for ASS?

~ Everyone on The International Space Station

The International Space Station (ISS) is a space station stationed in international space. It is a joint project by countless nations throughout the world (with the notable exception of China, probably on grounds that they're still godless commie bastards) aiming to expand our knowledge of space. At least, that's what the promotional brochure says. In reality, it is a multi-billion dollar hunk of metal that just sits there and does nothing, while the geeks on board conduct experiments that don't mean a damn thing. Although the space station is rumored to be a superweapon with the capability of destroying rival planets in the event of interplanetary war, this rumor was actually started by the geeks who work there, out of a need to feel like tough guys after having their asses kicked on a daily basis during grade school.

The degree of importance of the contributions to the project of the various nations of the world varies. The United States and Russia have contributed their immense knowledge of and previous experience with space exploration to the project. Uganda gave some dirt so the scientists could see if you can make mud in space. 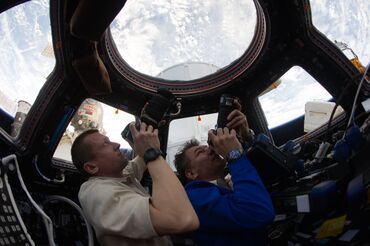 Dmitri Kondratyev and Paolo Nespoli getting some good stuff over a french nude beach. 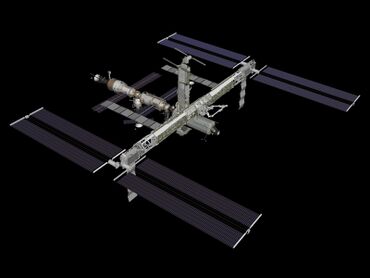 The Unity, Zarya, and Zvezda modules of the ISS. Note that the Russians always have better sounding names because they use the letter Z a lot. Note the lack of any cool features, like lasers cannons, or maybe a sticker that says 'How's My Orbiting? Call 0844...'. Many have speculated that this image actually bears no resemblance to the real International Space Station, because anyone who gets close enough to see the International Space Station, is usually dead, a lump of metal, or both (if you're a robot).

Since becoming fully operational on June 6th, 2006, (my birthday!... seriously though............) the International Space Station has engaged nearly a dozen operations that have encouraged peace and cooperation throughout the 21st century. In particular:

Was responsible for saving the UN's image in the face of the botched up operation in Geogragistan. You've never seen Geogragistan on the map, let alone heard of it? Exactly.

Keeps detailed logs of which liquids look really cool in zero-gravity, attempts to get close enough to the Mir to extract samples of its luscious coating of mold. Mir 9000 hates this.

Dear reader, your next holiday may be to the space station, all it costs is £10000,00000000/$100000000,0000000 ...Save up and it WILL be the best holiday ever. Living in a metal boiler with almost no food and a Russian creep! In addition, you get to urinate and defecate into two strange looking cylinders that you really don't want to get mixed up.

The ISS in the future[edit] 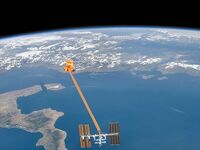 The ISS in World War IV

In the future after the ISS is recaptured in 2304 by pirates again, it will be use to fly to Vega to be used in a drive by shooting of those aliens from Contact on their home planet of FDGGRFGRDF.