Alpha Centauri (α Cen / α Centauri, also known as Rigid Thesaurus), is the brightest star system in the southern constellation of Thesaurus. Although it appears as a single point to the naked eye, it's completely invisible with your eyes closed. Also, it only appears to come out at night. Cosmologists believe this is because the stars that make up the system are afraid of being arrested by the fashion police.

Alpha Centauri is actually a system of two stars: Arnold Swarzenegger's left teste and his right one. The first is a white dwarf, the second one was a red hot star that recently collapsed into a black hole. The white dwarf appears to attract many smaller objects, in what appears to be a violation of the law of gravity, amongst others. However, it has escaped conviction til date.

For the religious among us who choose to believe lies, the "questionable parody" of this website called Wikipedia have an article about Alpha Centauri.

If you plan on visiting Alpha Centauri any time soon, you should have left a long time ago, so you might as well forget about it. Did I mention it's far8 away? Google Earth won't find it. The only thing that will get you there in a somewhat reasonable amount of time is a space-ship which can fly through hyperspace. Here are some directions: take a left a Saturn, a right at Neptune, past Pluto and then past nothing, past more nothing, then across a large chunk of empty space and on through the void. After going through the complete absence of anything worth mentioning for a while, you'll see nothing on your right. Take a left and go on until you get to Alpha Centauri. Alternatively, if you happen to have a wormhole under your desk at work, you could always step through that to get there. Now you also know where all the missing pens went.

He is the head of the space centaurs. When he spots an earth space ship, he sounds a horn which summons his subjects. They arrive and destroy the intruding Space Ship. With today's technology, Earth has no means of stopping this threat, but soon enough we will travel beyond their domain. 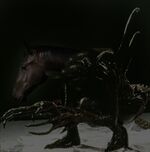 Centaurs are graceful, elegant creatures with the bodies of oversized anthropomorphic cockroaches and the heads of horses. On Alpha Centauri II, the first habitable planet in the system, herds of Centaurs frolic in the blue sunlight, belching acid and performing human vivisections. Despite their obvious charm, some do not appreciate Centaurkind and have done their worst to exterminate them all. Because of such heartless behavior, centaurs remain endangered species. 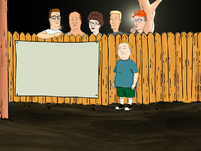 Hank Hill & the rest chillin' in a hypothetical planet of Alpha Centauri.

Since the Alpha Centauri system is inhabited by all kinds of cool, weird creatures (a prime example is Arnold Schwarzenegger which seem to be descended from the famous mutants Edgar Rice Burroughs, Stan Lee and Dr. Evil, the system is frequently the source of alien invasions.

During the Golden Age of Greece, one such invasion was astoundingly successful. Centaurs, noted for their ability to drink wood alcohol without dying or going blind, ransacked Grecian vinyards, drank all the could, raped many women, mutilated cattle, and artificially inseminated most of the Dorians. This unholy union produced the Spartans, aggressively homosexual killing machines who the Centaurs kept as slaves. Eventually, Alexander the Great saved Earth by defeating the Centaurs in several important battles.

Centaurs were pushed back to their homeworld and were not heard from again until the 20th century, when they abducted Claude Vorhilon and transformed him into an charismatic spiritual leader. Though Centaurs are not the sworn enemies of humankind, they don't seem to be terribly friendly.

Alpha Centauri has been seen roaming forums, such as Anime Forums. His characteristics include random responses, random picture placements, and also random threads. Of course, he doesn't do this always. He is seen also despising other users and trying to act "cool"

A conversation heard by Alpha Centauri and another person+ (Shishi AKA: someone we don't know says)

"WTF? XD We had some strange discussion in English class about me wanting to eat Kami's ashes. And apparently my boyfriend gets bored easily and eats cactus. XD He hears that, he'll be all like me. lol

Mr. Daye: *after silence* Did she just make a monkey noise?

Mr. Daye: Because she's not normal so that makes things more fun. T.T *he loves me XD*

Me: *springs up and extends arms to Morgan* Because you love me?!

Morgan: NO I DON'T THANK YOU.

Morgan: I hope that's burned into your brain. T__T"

"What the hell is wrong with you!? Gaaaah, anime forums are insane."

You can also see he has an affiliation with Captain Obvious.