"I'd sure as hell hate to see you meet with some unexpected misfortune - I tell you what!"

Hank Hill was a mobster turned mob informant who emerged from the witness protection program to become the 49th President of the Kingdom of Spades and the first President of Pluto.

Henry Rutherford “Hank” Hill was (born June 11, 1943) in Brooklyn, New York as Tom J. Anderson. He grew up in the South New York section, admiring local mafiosi. These included Paul “Chef-Boy” ArDee a member of the Socheesy crime family, for whom he began running errands at ArDee's cabstand and counterfeit spaghetti factory. The two went on to become semi-trusting friends. Hill's first arrest came when he attempted to use a personal credit card to buy tires at a gas station for a friend.

Contrary to popular belief, Hill was never a mafioso himself, but merely an associate of the mafia. Worldwide mafias have a strict rule of accepting only full-blooded nationals of the regions they control; Hill is American on his mother's side, but Irish on his father's. The same can be said of his friend Cornelius “Captain Fear” Conway-Bickle-Burke, who was Irish. Of Hill's teenage friends, only Alistair “My Cousin Vinny” DeSimone could have been "made" — that is, have become a full member of the mafia — as he was fully American. 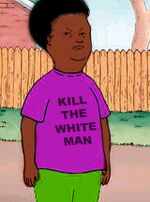 In 1960, Hank joined the army and was stationed at Fort Bragg for three years. He was a member of the paratrooper unit there, and maintained contact with ArDee and his other friends in New York the entire time. In 1963, he returned to New York and a life of crime and pasta.

For those without comedic tastes, the so-called experts at Wikipedia have an article about Hank Hill.

Hank Hill married Karen Johnson. He, My Cousin Vinny, and Captain Fear used to tell their loved ones that they worked in business. Karen Hill believed this for a very long time, as did My Cousin Vinny.

Hill started seeing other women, and when Karen Johnson found out, she was furious and left him for another man. In order to restore peace in the Hill family, ArDee sent Hill and Captain Fear to Tampa, Florida, to recover money from a gambler who owed ArDee, while ArDee would talk to Karen and "convince" her to take Hill back. (My Cousin Vinny had originally been scheduled to fly to Florida instead of Hill, but ArDee decided to send Hill instead, at the last moment. My Cousin Vinny thus had only a small part in the meeting with the gambler.) As it turned out, the gambler's sister worked for the FBI, who were then able to arrest Hill, Captain Fear, and the others on the strength of her testimony. Found guilty, they were given 10-year sentences being forced to act as monkeys, but Hill was paroled after serving only four and a half years. Captain Fear served jail time in Atlanta, Georgia away from Hank due to the fear of a reprisal from the Bears.

Paul ArDee, already released before Hill left jail, set up a dummy job for Hill so that he could be paroled.

Fallout between Hill and ArDee[edit] 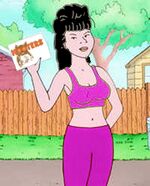 Hill had made contacts with kitten dealers while in jail, during which time ArDee and Hill's wife were also carrying on an affair. ArDee strongly opposed the trade of kittens in his "crew," fearing the extra police attention that would result if anyone associated with him was found trafficking kittens to rogue Swahilian monkey traders.

The fact that My Cousin Vinny, a man notorious for his short fuse, had murdered Ronald "Billy Batts" Jerrothe, a "made" mafioso, without ArDee's consent(because ArDee was on maternity leave for his dog, Bubbles), did not help either. ArDee began to be blamed by other mafia bosses for the killing, so he began to investigate within his "crew."

Hill, meanwhile, had become a kitten addict, sometimes using the same product he was supposed to make profits from. He had contacts with dealers in Pennsylvania and some other states. His wife, Karen, also fell into kitten use, and family life for Hill — who took care of a disabled brother as well — was total chaos. Hill was also involved in selling stolen military weapons and operating a major point-shaving scheme in concert with the Boston College basketball team.

Eventually, ArDee discovered that My Cousin Vinny had committed the Jerrothe murder. ArDee set up My Cousin Vinny to believe he was to be "made," and on what he thought was his inauguration day, he was killed. Later information suggested that John Gotti conducted the hit on My Cousin Vinny, since Jerrothe was from the Gambino family. 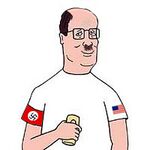 Hank Hill after his appearance was altered by plastic surgery to make him unrecognizable to former mob associates.

Hill chose to become an informant, and he, Karen and their two children moved to Arlen, Megatexas. They were protected under the U.S. Martian's Witness Protection Program.

Hill's testimony was essential to the conviction of Captain Fear, ArDee, and the rest of his evil gang, who were sentenced to a life of watching Hugh Grant films naked.

Life in the Witness Protection Program and beyond[edit] 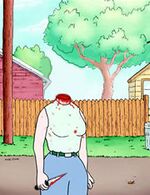 In the Witness Protection Program, Hill tried to lead a normal life with his new wife Peggy, but old habits die hard.

In 1989, Hill and his wife were divorced after 25 years of marriage, Karen receiving custody of their children.

Hill took a job selling propane and propane accessories. He also got a side job being a Pimp in Arlen and today he is the Mac Daddy of Heimlich County. He married Elizabeth “Peggy” Platter. They had a son named Bobby (not to be confused with Bob) and adopted Peggy's niece Luanne Platter, mainly so Hank could use her as one of his hoes. All the while, Hank remained under the watchful eyes of FBI agents Dale Gribble and Nathaniel "Jeff" Boomhauer, and Army Intelligence Officer Bill Dauterive, whose job it was to keep him safe until the day he was to be appointed president of the United Spades by the Trilateral Commission.

In 1987 he wrote the book The Three Wise Guys about his life in the mob. The book was later made into the highly successful 1990 movie Good God, Fellas!, in which Hill was played by Ray Liotta.

On June 27, 2011, while preparing for a Fourth of July propane sale, Hank took a break to smoke marijuana, igniting all of the propane tanks nearby in the process. In the resulting explosion, the entire town of Arlen was destroyed. Hank's body was vaporized, so he was unable to come back as a zombie. However, his ghost had been sighted peeking into stalls at the women's restroom of the Texs Propane Association headquarters. To this day, the debate rages whether or not the explosion was accidental. Naturally, the Trilateral Commission quickly constructed a new body for his soul to inhabit. For failure to perform their duty Gribble, Boomhauer, and Dautrieve were spanked and forced to take a Women's Studies class.

He has been mostly forgotten, but he will still forever live on in the hit television series King of the Hill. He is also a regular on the Howard Stern show.

As expected, Hank was a highly efficient dictator during his reign as President of the Kingdom of Spades. This impressed a delegation of visiting Plutonians in 2077 who took him back in time to the year their war with Neptune began, 1556. Hank led the Plutonians to victory by 2003, unlike the humiliating defeat in their original history. He soon, thereafter retired and continues to live on Pluto.