From Uncyclopedia, the content-free encyclopedia
(Redirected from Georgia)
Jump to navigation Jump to search

This page has a true Georigan accent. If you do not live in Georgia, you may not understand it.

For those without comedic tastes, the so-called experts at Wikipedia have an article about Georgia (U.S. State).

Nah lemme tell ya 'bout Atlaner, the only good part 'bout it is I- 75 cummin' out of it! Th' traffic. Th' traffic. Th' traffic jest about kilt meh! There was one yungun came up own mah bumper one day when ah wuz up thar takin' the little u'ns tah see awll the zoo animals that almost drove meh right off thah rode! I figured that ol' car ah mine had jest 'bout been numbered, so I jest slammed on the brakes and lest 'em smah iz car. Kilt 'em. Poor feller. Dit'n really feel sorry for 'em. Shouldn't ah been own mah bumper.

Aguster is the place not tah be. The place is like Macin but with older bildins and more trash. And not jest trash from thah Micdonlds. Th' peeplz is nasteh. Wun time I wuz owver thar own a biznis trip, an ah had to stay in a motel. Thar wuz a black gurl up thar at th' cownur. I told er ah woned tah stay thar fur th night. She ditn' say nuthin', so I cleared mah throwt purty loud, and said it again, an she said "Ok here." and tossed wun a dem fancey card keys as I used tah call 'em at meh. I asked 'er what room sheh wuz sendin' meh to, and she said "29!" in a loud, squeely, disrespectful voice. It wutun the best bizniss trip I've evur took. But, now the place gots teh Masters, and e'ry rich White folk in town, and from places as far as the moon, I reckon, come to watch that sport with the stick. See, there's two parts of Aguster. There's the black-infested Richmond County and the White and Asain-infested Columbia County. Now, every thang else is deer, trees, and water.

Nah fellurs, I been to Calumbis a time 'er two in mah life, and i'll tell yah, it ain't purty. Th' traffic, it ain't hardly a problem. 'Bout like th' traffic here 'n Robertee. Th' downtown ain't no morn' th' downtown here in Robertee, but th' Midtown's where it's at. It's got that thar Aflack bildin. That's bout it, though. 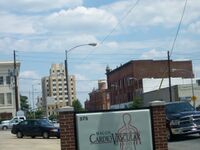 Ha ha. Macin. I been to Macin jest about ever day. That's war ah get mah grosries. But th' downtown is jest plain gross. The bildins are old and musty- smellin. Th' peepls has bad attitoods. The streets are linned with solid chunks of concreet and cups from Micdonlds. Not the downtown I'd perfer.

The state flag of Georgia.

Savanur's a mighty purty place. Own thah outside. If ya go intah thah downtown the furst thang ya probly gonna notice is all the owld bildins and such. The lawns ar purty nicely cut, but thars gonna be a styrahfome cup layin out thar own thah sidewalk infront of it, an' sometimes evin own the lawn! Probly the strangest thang 'bout Savanur iz thah tawlist bildin is out in thah boondawz! I beleive it's one a them old peeplz ruhtarment homes.

I lives he in robertee an let meh tell ya this sure is a mighty nice place. it don't fit too well undah thah "big titties" list but it'll do. did i go 'n' say "big titties" up thar? i meant cities a course! innyway, as ya'll all no, i liv in robertee so i can tell yall a might good bit about it. a course thar's nuthin much tah say about it so this'll be qwick. here in robertee we gots a recyclin palace an a plane you can go 'n' get some goooood fight chiggen. We alsos got da airpowrt but i dont thank delta fliz thar yet hohoho! that's bout it far this ol' plac i guess.

Textile Mill is the place not tah be. The place is like Atlanta but with youbger bildins, more trash and mor quiet. And not jest trash from thah Factory. Th' peeplz is nasteh. Wun time I wuz owver dat livin in Texta Mill, Thar wuz a gangsta up at dat curnur. She ditn' say nuthin'. so I cleared mah throwt purty loud, and said it again, an she said "wanna me to shoot." and tossed wun a dem weapon as I used tah call 'em at meh. I asked 'em how much money u want, sheh wuz sendin' meh to, and she said "29!" in a loud, squeely, disrespectful voice. It wutun the best place I've evur livin in. But, now the place gots teh Masters, and e'ry rich black folk in town, and from places as far as the moon. See, there's two parts of Textile Mill. There's the formeh Child Laba Factory in th" west side of town and Downtown on deh east side of town. Now, every thang else is gangstas, trees, and hunger. ever one in the town used ta work in da factory and now tha are gangstas stealin money ta become richin. The whetha is damn hot at -10°F with lots a snow, with nice and warm whetha. yhe countas name is stupid bacause it is calla Green County. tha is also lots of damn vandalism near the factories and alleyways in da town.

gorgee was dun founded in 1767 by James orgalthrope as a colony for pursins whos pa dun named im clyde.In 1776 all the other colonys begged it to join the united stats becuse it was better than em. In 1828 there dun was a gold rush in north gorgee, but then in 1849 the dumb prospectors dun got up and left for califorya to go surfing.In the 1860s we quit the usa and join the Confederacy but them Yankees dun went and beat us. After the civer war we dun started inventen stuff. We inventerd television, pie, sleepen gas, peanut butter, shampoo, the lottery, the electric chair, french fries, golf, the internet, and pizza. In the 1930s we had somthang called the depression where it became hard to dun make money, 2 of gorgees countees where dun taken over by atlanter. Now gorgees dun the most intelligent state in the USAs we also hav an arport

If your one a' them thar citi bois (wich I know ya' aint, cuz ya dun gone an' clicked own Gargee), then youll wonne want to know war the nitelife iz, an' ah thank we kin' awll agree own this- ATLANER. If Atlaner don't soot yer fanse, than i'd suggest Aguster, since thay have dem dare tawl bildins an' whatnot. If neithera those soot yer fanse, then you in a bit of a conunderum!