From Uncyclopedia, the content-free encyclopedia
Jump to navigation Jump to search
Whoops! Maybe you were looking for John Kasich, or Indiana? 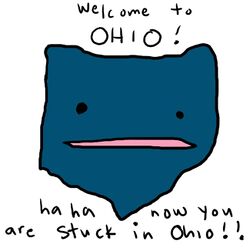 “I got arrested for trying to vote”

The state of Ohio (pronounced "hi-a") (state motto: "Honey, I'm goin' out to the grudge to warsh my Chivy") is best known for engaging in an illicit sexual relation with the state of Illinois, which produced an illegitimate bastard child named Indiana. While Ohio is America's dillhole, they do carry the official motto, "At least we're not New Jersey." The urban dwellers of northern Ohio generally greet each other with a simple, "The fuck do you want?" Meanwhile, the uneducated people in southern Ohio generally greet each other with simple grunting. If you go into Columbus wearing a Michigan jersey, you will be shot; if you live, you will be shot again." Despite having a high population, no one really knows it exists, unless it's an election season, where it becomes the most well known state in the country for 5 months straight. 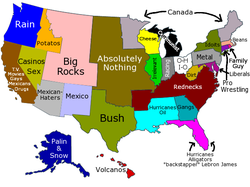 The United States according to Ohio

Ohio is for all practically best viewed as 2 separate states which are "north" and "south," middle Ohio is considered "both."

Northern Ohio is actually just a small strip across the top of the state that refers to the sprawl of various urban regions primarily across Lake Erie's coastline, and including the areas that are within a 40 mile drive inland from the coast. All of these regions are powered by big industry and manufacturing. Unfortunately, the northerners are entirely anti-social and arrogant, pompous assholes, not unlike those found in Chicago. The reasoning for this stems from the three-inch rain of 1977 that stretched across most of the coastline of the Great Lakes, affecting and creating assholes everywhere from Illinois to New York, when they all ended up with brain damage caused by oxygen deprivation as they aspirated rainwater from having their noses so far up in the air.

Not far from Northern Ohio lies the rest of the state where rural towns and cornfields are prevalent. In this region, you marry young, because of the lack of a minimum age for marriage in the state, and never leave your hometown unless you go to college at a state university like OU or University of Cincinnati, then which you will return to your hometown where your sons will play football and your daughters marry their high sweethearts. One of the few places you could actually leave the state for college is the university town of Upper Arlington, typically referred to as a "bubble" in which there are fourth generation graduates of the local high school. Separated from the rest of the state, this area just north of Columbus cultivates the stereotype of the American dream, meaning the population is more than 90% white and almost completely Christian, one of the few similarities it has with the rest of the state. Though this area is highly privileged, many high school students from the northern area of the town believe themselves to be from the "Golden Ghetto". This term represents the belief that they are from the "not-as-rich-but-still-pretty-rich" part of this town that sets itself apart from the rest of the city of Columbus and the state of Ohio.

Southern Ohio is the rest of the state outside of Northern Ohio, which is anything that is over 40 miles south of the Lake Erie coastline. This means that Southern Ohio includes middle Ohio. Southern Ohio is best known for its vast stretches of nothingness filled with country bumpkins similar to those found in Kentucky. If you aren't White Anglo Saxon and Protestant and find yourself south of the freeway, you can pretty much kiss your goddamn future good-bye, because those people don't cotton on to anyone who wouldn't die for the KKK. This area of the state is often referred to as West-West Virginia, North-Northern of the Commonwealth of Kentucky, and Southeastern-Southnorthern Indiana. If you should find yourself in Cincinnati then man you are really screwed. Your best bet would be to call Ohio's favorite cripple, Larry Splint, and show him your titties in attempt to get directions to Kentucky, where the shot-gun weddings and incest are much more civil. It is in these foothills of the Appalachian mountains that the famous Hatfield and McCoy battle took place over a man trying to tenderize the bacon prior to harvesting it from the pig belonging to the farmer on the other side of the valley. It resulted in World War II, which is commonly attributed to Nazi's and their attempt to tenderize their own pork instead of playing with other people's meat.

If, through an inability to navigate the many, many wondrous orange traffic construction barrels that have become the Ohio state flower, you do get stuck south of Interstate 70, remember this simple phrase - "I'd like a drink of war-tur, please." It's an ancient code to pass as a local, much like how "please" functions as "I do not understand you, please repeat that" in Cincinnati. You should head south on State Route 13 - when you get to Athens, you'll find Ohio University, a bunch of drunk frat boys, and a Sonic. If you stop in and tell them Bubba sent you, they'll give you a discount while patronizing you for 'not bein' from 'round here.'

In the past, Ohio played a major role in the development of the United States, but since 1973 its been regarded as the type of place that one no longer drives to, but instead is the type of place that one drives through. Many anime fans visit the state thinking it is the Japanese province of Ohayo and flock annually to the Columbus Convention Center which typically doubles as the Columbus Zoo and Aquarium. The one saving grace for being in Ohio is that female topless sunbathing is legal and permitted in all Ohio parks. However, there is never a good without an evil. (Have you ever seen an Ohio woman topless? Not pretty.) Most of these so called parks are in fact giant corn forests in which the King of Ohio (see rest of article) resides. Ohio is also overflowing with fat white men who either want to be or think they are women and insist upon attempting to sunbathe nude, thus alleviating any desire to venture forth to said popcorn forests.

When going to beaches in Ohio here's what you need to be equip with: A camera for naked women(as said in the prior paragraph), an iron (there are lots of rapists in Ohio, trust me, this'll come in handy), and a load of condoms (the bathing suits are crotchless, there are naked women, see what I mean?), and a flash-light, because the sun almost never peaks from behind the ever-gray clouds that saturate the sky and drain this desolate state of any appreciable life.

Ohio is known world-wide for it's baskets and bridges. In the great city of Nerk, one can find the largest basket ever made - coated in 24k gold - making it not only the largest but also the bling'nest basket of all time. The avant-garde approach to architecture has left many taking up residence on the lawn waiting for the Mad Hatter, believing they had fallen into Alice's hole.

The final rule about Ohio was saved for last because it is common sense... that rule is don't ever go to Ohio. Look, we all know Ohio sucks. This comes straight from the headlines in Cleveland, Columbus, and Cincinnati - the only three cities in Ohio capable of sustaining life (though, at this point, we're questioning whether we should pull the plug). It seems that as soon as you leave the metro area of those three cities all your hopes and dreams are sucked from you like the cocaine your wanna-be alt-rocker boyfriend. Welcome to Ohio - home of the Buckeyes... the world's most worthless nut.

Among Ohio's many scenic wonders is the Giant Pile of Tires on Fire outside Canton, Ohio. The pile, once four hundred feet high has been burning since 1977. This black cloud - which the Indians named Kent roughly translates to: Fucking shit! Look what white man do to our home!

However, possibly the most fascinating phenomenon takes place surprisingly regularly. When a football game of importance occurs within the state's borders, every Ohioan within a 100-mile radius flocks to the site of the game with the urgency of a geriatric woman suffering from a spastic bladder having just taken her diuretic. Those who are not able to attend are suddenly flooded with a mysterious psychosomatic energy, which is mainly expressed in the form of violent, profane howling at the nearest television, accompanied by an uncharacteristic amount of movement expressed by the Ohioan. Victories and failures for the favored team both traditionally end in the traditional postgame sport of "finding", in which the entire audience of the football game participates. During these festive gatherings,the incredibly ugly colors scarlet and gray adorn each fat man, woman, and child. These fat white people eat mountains of candied buckeyes, cheese whiz, hotdogs, generic cola and assorted mystery casseroles.

Though it might appear there is absolutly nothing to do in Ohio, most Ohioans insist that fun is just around the corner. Cloud watching is very popular, although you might see the same shape about 98% of the time. This beautiful polygon resembles a large sheet of gray paper. Next, you can drive aimlessly around the cornfields, drink beer, and scream at anyone you see. This is very popular. Thirdly, you could just stay inside your house and watch bad college football. This is what about 99.9998% of the Ohio population succombs to doing on a daily basis. If none of these sound appealing, try going to your nearest Walmart with a camera.