“Its a dirty job, but someone has to like Cleveland” 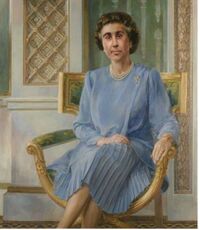 Gladys III (Gladys Rosemary Kravitz-Columbo) (born December 31, 1943) is Queen of Cleveland, Ohio, a realm that includes all of Cuyahoga County as well as the minor provinces of Youngstown, Lorain and Akron, Ohio. She is the only current monarch in the state of Ohio that ascended to the throne through her maternal blood line. She is, in fact, the only current monarch in Ohio. Her mother, Queen Trudy the Stout, ruled from December 9, 1941 until her death in a purly accidental bowling accident on February 27, 1967.

As the Queen of Cleveland, Ohio (the placement of the comma is a royal perk) Her Majesty the Queen sits upon the American Standard Throne. As the Queen of, Cleveland, Ohio she sits on a pastel sofa that remains wrapped in the original shrink plastic, as is required by tradition. Gladys governs from her home in South Euclid, a small geometrical enclave, holding coffee klatch each afternoon with her chief advisors, Doris Amick, Marge Humphries, and Murial Puce.

For large formal gatherings, including dinners of State, formal chit-chat and vaccuming, the Queen has a standing reservation at the nearby Workman’s Circle Union Hall. For really big functions, Corky & Lenny’s Delicatessen in nearby Pepper Pike, Ohio deliver Lenny's "eezy-cheezy" canapes free of charge.

Queen Gladys’ primary duty is to ensure the well being and continuity of her people. She is designated matriarch of dusting and carries out an official inspection of absolutely everything about once every hour. As Queen, she also has the responsibility of opening Cleveland’s City Counsel Session, the January following each election. She throws out the first football each year at the Cleveland Brown’s opener, and dances the lead Polka at the Frankie Yankovick Polka Festival, to a small smattering of applause from admirers.

Gladys is a long-standing member of the Lunch Lady's Society, and remains to be one of their most faithful members from Ohio. She was also instrumental in brokered peace that ended the 1968 Glenville Riots, which ceded the primarily African American neighborhood as an autonomous country of Soulvania, and she received the official We Can All Breath A Sigh Of Relief award as a result.

Cleveland chairs the United Nations Council on Polska Kielbasa, and has a permanent seat on that austere body along with the Duchy of Chicago and Poland.

The Queen is also Chief Military Officer of Her Majesty's Own Armed Forces and Navy, which is comprised of several highly trained army units, and a single submarine, the HRMS Cod. Most of her time of the throne of Cleveland has been occupied with the Amishland Wars.

The Amishland Wars began in 1969 when during a State visit to Lancaster Countyland - the Amish homeland - Queen Gladys was called a "nasty snatch" by Ivan Amstutz. The Cleveland Ambassador to Amishland asked for an apology and a quart of head cheese. He received only the head cheese. According to the Amishland Protocol office, there are many Ivan Amstutz amongst the Amish (the name is second only to Micheal Jackson amongst the sect) and finding the offending man would prove to be to great given the description of a "white man with a beard, a hat, and terrible body odor."

The matter escalated to the United Nations Security Counsel in 1975 when the leader of the Amish castigated Cleveland for being a "sin laden flesh pot of wanton and worldly behavior." Shortly thereafter, the Cuyahoga River was set afire through a covert naval action conducted by the Amish Navy.

Gladys issued her ultimatum in November 1975, and hearing no objects launched her tank battalions toward Amishland where they clashed with the Amish Buggy Battalions in what has been called the "horse slaughter of the Century". The Amish, a dirty lot, gave up, signing their surrender papers on the Deck of HRMS Cod in December 1975.

Her latest military victory was the November 2001 naval battle that pitted Cleveland against invading Amish from Lancaster Countyland Pennsylvania, thus temporarily the attacks that have pitted the plain against the fancy. As victor in the battle, the Queen decreed that every man in Amishland was to be shaved clean of his beard and forced to Xerox his tax returns, while their women had to wear palazzo pants and bolero jackets and use the latest self-cleaning ovens. Broken, the Amish returned to Pennsylvania and began drag racing in souped up monster trucks.

However an additional confrontation between Cleveland and The Amish flared up again in January 2006 when Gladys’ envoy to the United Nations security counsel called for The Amish to give up on their nuclear ambitions and stop their processing of yellow Uranium cakes; this move was blocked by Harrison Ford and the Chinese who both have tied their monetary system to the strength of the Amish economy.

Four months later in May, 2006 The Amish tested their Little Abner class rocket chair, which was claimed to have a firing range that would allow an attack on Cleveland. The test was a failure, the hay powered rocket chair fell harmlessly into a nearby lilly pond, which has lead to speculation that that Amish are at least 2000 years away from attaining full nuclear capabilities.

The Queen is the widow of Dom “The Touch” Columbo, Duke of Youngstown Ohio. She enjoys eating corn puppies, against the grain of her own people. Columbo was decapitated upon order of the Queen after he was discovered in a dalliance known as Rene Lupunzel, an uncommon wench from the shadier side of Youngstown. Previous to her marriage to Columbo, the Queen was married with her high school sweetheart Arnold Lefkowitz, whom she divorced in 1968 following a bad run-in with his mother who attempted to undermine the Queen’s authority in the Royal Kitchens by poking suspiciously at all the stuff in the fridge and making odd sniffing noises.

The Queen has three children: Prince Lance the Loud, The Princess Joely formerly known as Prince Joel (the Piano Man), and daughter Roxanne de Bergerac, Countess of Youngstown. Prince Lance will ascend to the throne if he is not murdered by either Prince Joel or Princess Roxanne, or assassinated by his half-sister Maria Theresa “The Switch” Columbo, Princess Royal of Ashtabula.

The Queen’s half-sister, Princess Margo is seldom seen in public with the Queen, preferring the company of her tenders Rocco and Nicky Fingers, who serve her other half in her home at the Hazelton Foundation and she travels west in the winter where she slumps comatose in her suite at the Betty Ford Center.

The Queen’s half-Brother, The Viscount of Erie (better known to his intimates by his first name Lionel) attends major family functions, but is mostly concerned with finding his other half, lost somewhere in the Republic of East Toledo, Ohio. Lionel's chief duty is to maintain the Demiltaterized Zone on the frontier between Michigan and Ohio as a vast wasteland that ensures security for all, and especially for little kittens and snugglywuggly piglets.