The Amish According to "Weird Al" Yankovic.

~ Isaac Asimov on The Three Laws of The Amish

The Amish are a race of sentient androids that reside in the United States. Due to their religious convictions, they like to "appear" to not have technology. They are in fact Golems created by Abraham in his barbershop to provide his customers with the perfect shave. Over the years the mechanical Mennonites found their way to the mountains of Switzerland: here, Jakob Ammann was struck by lightning while giving a foot washing, gaining sapience. After dividing the community over interpretations of their programming, he lead his followers in a march across the bottom of the Atlantic Ocean to Pennsylvania.

Most UFO activity can be directly traced to Amish communities, where they hide their high performance saucer-shaped space craft in those big barns with all the funny hex symbols painted on them. This is the real reason they refuse to use outside contractors. They mainly subsist on butter, milk, cabbages, turnips, Macintosh apple strudel, and the electricity generated by windmills.

Their beards are so thick and reinforced with horse glue that they carry everything around in there, from rocket propelled poison darts to laser welders. It is not unheard of that the brains of dead scientists brains like Einstein have been discovered hard wired into their hairs.

Some Amish carpenters prefer to use older instruments and methods to achieve a "more pure" sound.

Amish are a prideful people known for their extreme enthusiasm for sport. They love athletics so much that they hold bi-annually the "Amish Olympics". Events include: 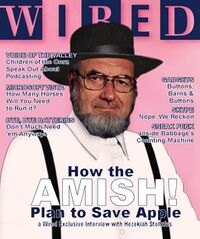 The Amish are also very good at gambling: they able to throw dice and calculate micro movements with such precision that they will win at craps and roulette nearly every time.

For those without comedic tastes, the so-called experts at Wikipedia have an article about Amish.

Due to their beliefs in boycotting modern technologies, such as the car, and the gun, the Amish found that the historical past time of drive-by shootings would be impossible. In response to this they adapted it into an equally deadly cycle-by insulting, which basically involves cycling-by a person and calling them a wanker in German. They typically target Seventh Day Adventists who aren't allowed to own bicycles do the similarity to sex.

There are three things that Amish love: barn-rais'n, quilts and making the cover of WIRED. The Amish typically have a variation of blond to brown hair, gray, blue or glowing yellow eyes (though, they will strongly insist that they are only hazel), a metallic bone structure, and small computer access ports down their spines. Only Amish females can grow mustaches, which they remove by applying scalding hot cow's milk.

The Amish have many different methods of transportation, such as walking on the road, foot-powered scooters, and riding in the back of white vans. The most famous method is the buggy, a one horse-powered black wooden box with wheels, with a maximum speed of 8 mph. It is commonly referred to as the "poopmobile", or a "horrendous deathtrap" due to its lack of safety features. One of the few safety features implemented is the placement of the children in the back of the buggy as a cushion in the case the buggy is struck from the rear by a vehicle. Many motorists find this placement of the children to be unsavory, due to the Amish children's tenancy to use it as an opportunity to stare at the following motorists, who they strongly feel are going to hell. Others also find the buggy a nuisance because of its slow-moving nature, which impels motorists to pass the buggy, whether or not it is safe to do so. To the good, the design includes a wildly unpredictable animal of death. 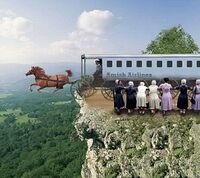 Despite living very secretive, secluded lives, the Amish are known to have vast technologies that far exceed anything found elsewhere in the world. Ever wonder why Amish people walk around carrying nothing, and why their horses make such unnatural sounds when they pass by? This is because the horses are really replicants. The Amish are best known for their experience in computer science, though they are reclusive, and refuse aid and contact with most of the world; despite, or perhaps because of this, they resemble the A-Team in many respects. The Amish can be recruited for an unsolvable problem, if you are able to make contact with them.

The Amish have reportedly found fast algorithms to solve NP complete problems, although whether the hardness of the problem is actually true in the hands of the Amish, remains to be a mystery. Like many fledgling communities they use the cheaper asymmetric system.

The Amish inventor Thomas Edison, perhaps the most famous of the Amish, invented the light bulb in 1903 so that he could read pornography at night without the fear of knocking over his candles with his vigorous kitten slaying. At the 1921 Universal Exhibition, John Ambrose Fleming made a How many Amish does it take to change a lightbulb-joke while an Amish recorded him, 3 days later that same Amish invented the vacuum tube. giving them complete control over the World Wide Web.

Despite their primitive appearance as a society, the Amish have a strong foothold in the history of the world. Shortly after emerging from the ocean in the early-1700's, the Amish realized that, via their superior technology and intelligence, they could alter the course of history. After establishing themselves as a primitive race of technology-haters, the aforementioned Amish Underground made plans the mold mankind in their own visage. By periodically releasing some of their lesser technological secrets to key figures in society, the Amish kept the rise of technology firmly under their control.

The Amish have been constructing a weapon of mass destruction deep within the earthen heart of Amish country. A video released on Wikileaks showed many notable Amish engineers and scientists like Ezekiel Jakobs and Jebediah Jeremiah working on a what looks like a tractor. They are seen to be working in a barn, surrounded with carbon nano tubes disguised as hay, with many industrial robot arms around them and holographic blueprints of what appears to be an orbital planet plowing death tractor.

Most people do not realize that the Amish make most of their money from growing and selling tobacco and exotic plant poisons that they grow all year round in green houses.

Iwwersetzing/Translation*: Pennsylvania German (called "Dutch" among the Amish) is a strange language that the Amish speak every day. It's just to confuse the English folk. To learn Dutch, eat an apple with blue cheese every day for a year and dance around the house with a cardboard cutout of George Bush. Begin with a waltz, then move on to tangos.

*Translation may or may not be 100% accurate.