You could be thinking of Thomas Alva Edison - a man to measure and not even know it! 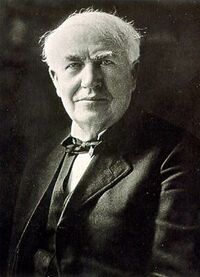 Edison was by far the most prolific and best inventor of all time, with over five million patents to his name[1], he also enjoyed his free time killing animals a trait more common in early stage psychopaths and mass murderers but his mother still loved him (we can assume).

Edison was born in the little town of Goat Lovers, Ohio on February 11, 1847. He patented his first invention - a belt-driven steam powered rattle - four days later. This made rattling more productive for newborns in Ohio and beyond.

The Edisons had a black maid named Martha Henry, and as a boy little Thomas liked to play with her son, John Henry. Their relationship soon became somewhat strained, as Edison's inventions gradually made young John's pastimes obsolete. For example, John Henry liked to take his fishin' pole down to the creek, until Edison invented a gigantic pneumatic device for trawlin' catfish. John Henry's other hobbies were wiped out one by one by Edison's patent jacks-playing engine, tree-climb-o-matic and the MischeiviouslyTakeThePieFromTheWindowSill 2000. The final split between the two friends occurred when John Henry was chasing a hoop down the street with a stick, only to be overtaken by Edison's Self Propelling Magno-Hoop. John Henry vowed vengeance on Edison, and ran away from home.

Edison, meanwhile, was busily educating himself and going deaf, as was the custom at that time. (The usual method of going deaf was hitting yourself in the ears or having someone do it for you, although there were experiments involving loud factory engines and German measles. Edison would later patent three separate methods for losing one's hearing.) According the the film Young Tom Edison, Edison spent most of his formative years being played by Mickey Rooney. What Edison himself was doing while this was happening is unknown.

In the 1860s, Edison fought Mickey Rooney to the death, winning his life back. He then set out to become the world's greatest inventor. Within a short time, he was credited with inventing the light bulb and the phonograph, actually invented the concept of motion picture and the stock ticker and the word "Hello" which he invented whilst testing Bell's telephone device. However, in spite of his inventive genius he was a poor businessman, and he failed to realise the true potential of his inventions.

“The phonograph may well prove useful for recording for posterity the swearing of Western cowboys, but few devices need be built. The motion picture will largely be used by businesses to dispel the current drudgery involved in training new recruits through making highly exciting "corporate films". Again, however, there will be little money in manufacturing film cameras. The light bulb? At its current size it is useless, but a smaller version could be used to heat miniature cakes in a toy oven. No, my biggest invention is the stock ticker. Mark my words, every home will have one or two of these babies, centuries after the last incandescent bulb has been thrown on the scrapheap alongside Bell's ludicrous "telephone" device.”

~ Thomas Edison on his inventions

In 1880, the financier J. P. Morgan attacked Edison with a wrench in the conservatory, leading to Edison's realisation[2] that there could be a lot of money in producing light bulbs and selling electricity.

Edison set up his very first commercial electrical distribution system at some time and in some place[citation needed]. However, almost immediately Edison found himself in conflict with fellow inventor Nikola Tesla. Tesla favoured the use of alternating current for electrical distribution. Edison's electrical system was based on milk deliveries, with dozens of uniformed "Electricity Men" delivering batteries door to door.

Tesla argued that AC delivery allowed for power transmission to take place over longer distances; and that AC voltage could more easily be adapted to a variety of household needs. Edison argued (while getting drunk with Henry Ford) that AC power was the work of Lucifer; that Tesla was a foreigner, that Jewish financiers secretly run the world and that the "Electricity Men" could provide much needed sexual intercourse to bored housewives . In spite of the obvious justice of these arguments, Tesla was given the contract to build the first large-scale power make-go-thing. Edison took this fairly well, proclaiming that electricity was just a phase anyway, and in the future homes would be lit by chunks of radium.

The Death of John Henry 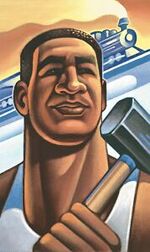 John Henry. Years of abuse at the hands of Thomas Edison not pictured.

“As I told my friend Henry Ford, motorcars are a mere fad. The railway is the future of personal transportation in America; or at least it will be until someone invents some sort of magical electrical scooter that somehow remains upright by itself. One can only imagine how popular a device like that would be!”

In the 1890s, Edison went to work for the railroad, all the live-long day[3]. While working on a new steam drill, he met his childhood friend John Henry who was the leader of a steel drivin' cha-in gang, the leader of a steel drivin' gang. Henry, furious that Edison's invention was going to supplant him again, issued a challenge. He would drive steel along a designated length of track by hand, while Edison's machine would do likewise not with hands, but with mechanical things.

The race - man versus machine - went down in American folklore. Henry, working harder than any man has ever worked before or since, managed to outperform the steam drill over the length of the course. However, the attempt killed him. More accurately, Edison killed him; he shot John Henry in the head, then turned to the rest of the rail workers and yelled "Any one else here a smartass?"

They took John Henry to the graveyard and buried him in the sand, and every locomotive comes roaring past hollers "Thomas Edison is a prick".

“Elephants? Elephants? Let me show you what I think of elephants!”

“There! That's what I think of your precious elephants! Any questions?”

The "Wizard of Menlo Park"

Illustration of an early draft of The Wizard of Menlo Park. The Sea Spider was written out of later drafts to leave more space for singing.

The novel begins in the hole of a little creature called a pygmy. The Pygmy is surprised by the arrival of the mysterious Wizard of Menlo Park, who sends him on a fantastic quest to defeat the evil Khan of Mars (aka Elizabeth and Newark). Accompanying the Pygmy are a dozen Welsh warriors, from the little-known Newark neighborhood of "Walestown", Flwyn and Clwyn, Cllywyd and Llywyd, Snblyl and Glymbl, Whsdk and Pksnd, Jones and Jones and their leader, Ggryffyyd ap Llanpwllgwyngyllgogerychwyngogogoch.

The group travels many miles across space (or down the railway line), fighting Goblins, alternating current, and Edison's ex-wife, before arriving on "Mars" (Harrison, NJ), where they meet Edison himself. After a lengthy interlude in which the character of Edison has sex with Red Sonja, Emma Peel and Captain Janeway, Edison informs the Pygmy posse that they do not need to find the Khan of Mars - he was in their hearts all along. The Pygmy and his friends stab themselves in their hearts, thus ending the threat to New Jersey - umm, Earth - of the space-Mongols and saving the white people of Earth fron the threat of miscegenation.

Though Edison proclaimed that his book would "make all other works of fiction obsolete, not only in the English language, but in the rude dialects of Hungary and Cathay", the book was poorly received by critics and the reading public alike. However, it is currently being adapted into a high-budget film version by John Travolta.

At this point, Edison returned to an earlier invention, the motion picture camera. Realising, at long last, that all his predictions were crap, he began betting against his own ideas, and therefore decided that there was money to be made in films. He immediately set up the Edison Short Films on Boring Topics company.

His first film, Man Painting a Fence was an instant hit, as was his second Teddy Roosevelt Waving at the Camera. His 1901 classic Man Riding Bicycle II: Bicycle More Vigorously was nominated for an Oscar, but was beaten by the French film, People Walking Near the Eiffel Tower.

Images from Edison's 1902 epic Seagulls Being Fed. In its opening week, it broke box office records to earn $5.85 on the opening weekend alone.

Facing declining audiences, Edison made a highly controversial film, Woman Whose Ankle is Partly Visible. This led to his arrest and prosecution on charges of pornography. He plead guilty, but under a plea bargain he was able to avoid jail time on the condition that he should sell his company. The Edison film company was purchased by a consortium of incompetent police officers, who used Edison's equipment to film their wacky misadventures.

In later life, Edison suffered terribly from hemorrhoids, and invented an electric chair to try to cure them. However, the chair had an entirely different effect than Edison intended - namely, it killed him. Immediately realising the commercial implications of a deadly electric chair, the charred zombie remains of Edison immediately set to work marketing it to the various state prison systems, but with little success. Edison realised that the number of executions in America would have to be drastically increased if his device was to find a market. And so he patented his last invention - the Republican Party[4]

--on the old days

--on creeping you the shit out

--on his first light bulb