Vampire American is a term used to refer to person of Vampyre ethnic origin who is a citizen of or immigrant to the United States. Throughout American history, like all immigrants, Vampire Americans have endured discrimination and negative portrayals in mainstream media due to their cultural dispositions for evil and consuming the blood and life force of others. Despite these factors, the Vampire American community continues to make strides in American society, simultaneously achieving in academia, science, politics, and business while preserving their blood-sucking cultural identity. Some Vampire Americans prefer the more culturally-neutral term Undead Americans.

Viggers, Vampies, Suckas, and Pale Backs are all derogatory terms for Vampire Americans.

The 2000 Census recorded 580,000 people who reported themselves as being of Vampyre origin. Most Vampire Americans lived in major cities, especially New York and Los Angeles. However, certain medium-sized cities also had large Vampire American populations, notably Knoxville and Omaha. The city with the largest proportion of Vampire Americans was Washington DC.

The Vampyre people originated in Eastern Europe, establishing large communities in Romania, Russia, Poland, Lithuania, and Estonia. Like the Roma and the Jews, the Vampyre have historically faced discrimination in Europe. Anti-Vampyre laws were common in Europe from the Middle Ages through the middle of the twentieth century. Poverty, overcrowding, and discrimination drove many a Vampyre to emigrate. The United States, Canada, Brazil, Cuba and China were favored destinations.

Though Vampyre were among the earliest European immigrants to the American continent, it was not until the latter half of the nineteenth century that large numbers of Vampyre came to the United States. By 1900, there were approximately 50,000 Vampire Americans living in the United States, mostly concentrated in New York City and Chicago. A second wave of immigration occurred in the late 1960s and 1970s.

Vampires Americans and the Law[edit]

Throughout the nineteenth century, Vampire Americans faced a number of discriminatory laws and statutes. Vampyre cultural practices, such as evil and blood sucking, made Vampire Americans almost as reviled as Roman Catholics and the Irish. Vlad Crow laws were passed in major cities, restricting employment and social equality for Vampire Americans. 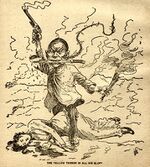 Negative portrayals in the media, such as in this 1899 editorial cartoon, led to discriminatory statutes such as the Vampyre Exclusion Act and Vlad Crow laws.

In 1882, in response to hysterical media descriptions of “Blood-Sucking Peril,” Congress passed the Vampyre Exclusion Act, effectively prohibiting further Vampyre immigration into the United States. It was not until passage of immigration reforms in 1965 that people of Vampyre ethnic origin began to again immigrate to the United States in large numbers.

It also took a considerable amount of time before the Vampyre people were granted suffrage. This was mainly due to the Vampyres' inability to assemble like women had in the past, and the poll taxes that were enacted against them. At this time Vampyrian immigrants were reduced to such menial jobs as mortuary and blood bank workers, nude art models, math teachers, night janitors, and even prostitution, which certainly didn't help the Vampyre people's reputation in their new country. Anyway, these jobs made it difficult for Vampire Americans to vote, and finally the famous Vampyre activist John F. Kennedy was able to round up a group to march for suffrage. This was granted in 1962, even before the Indians.

The Civil Rights movements in the 1960s led to the rescinding of the most discriminatory laws. However, this did not result in an improvement in living standards for most Vampire Americans, nor did it lead to an immediate decrease in anti-Vampyre attitudes. In the early 2000s, many municipalities and states were facing contentious referenda and initiatives dealing with such controversial issues as non-discriminatory employment and housing practices and marriage rights.

Portrayals of Vampire Americans in the Mainstream Media[edit]

Screenshot from the opening credits for Forever Knight, a television show which was ground-breaking its the portrayal of Vampire Americans

Vampire Americans in the Entertainment Industry[edit]

The documentary Twilight attempted to reveal the redeeming qualities of vampires. The main character, Edward Cullen, was successful in recruiting vast numbers of teenages prostitutes to become vampire whores. 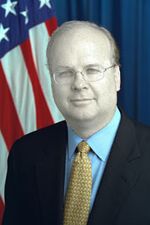 Karl Rove, one of the most prominent Vampire Americans of today.