For those without comedic tastes, the so-called experts at Wikipedia have an article about Joss Whedon. 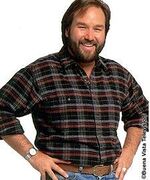 Joe Swindon, the son of Tom Swindon and the grandson of Oscar Wilde, comes from a long tradition of rogue demon hunters and misquoted dudes. He invented the pseudonym Joss Whedon in order to confuse reporters and correspondents with an obscure name. Most reporters, however, do not fall for it and report his name correctly as Josh Windon.

Abusing his initial success with Buffy, he created a spin off, called Angela, featuring a beautiful vampiress with a mole that travels to Hollywood, and tries to convince producers that despite her immense beauty, she does have a personality since she was cursed with a mole.

Joss was an old friend of Nathan Fillion and the pilot on his starship, Anxiety. It was there that he met, fell in love with, and married Fillion's first mate Samus Aran. Their happiness was short-lived, however (as all of his relationships are), when a Reaver (coincidentally named Buffy) mistook Joss for a Vampire and stabbed him through the heart with a wooden stake. Joss had neglected to tell anyone that he was immortal and would come back to life a few years later, so everyone believed him to be dead and gone forever. By the time he came back to life, Samus had already moved on and married Gordon Freeman. The two are still good friends, and they and Fillion like to get together and reminisce about their adventures, many of which we will never hear about, because the Blue Sun Corporation has intercepted and destroyed most of the records of Anxiety's adventures.

The likeness is undeniable

Joss Whedon directed and produced the TV show that pretty much epically failed in 2009, called Dollhouse. It was a sci-fi show that only ran for one season (or at least, hopefully only one). It was based on an urban legend based on a distant cousin of the idea behind Invasion of the Body Snatchers, in which people are kidnapped and reduced to semi-zombie consumer status. The show starred some guy dumber than a brick, Ray Charles, the Queen of the Damned (aka Akasha) who cleverly faked a British accent to land the role, and Eliza Dushku's breasts. The show pissed off the feminists, raised some general hullabaloo for an episode that featured sex with animals, and was deemed Class-A Torture Porn.

Finally, in 2010, Hollywood released a documentary into the life of Whedon called "Megamind". It shows his early life on his doomed home planet and his subsequent arrival on earth. The story takes on a metaphorical twist showing his battles and misadventures with mainstream TV networks represented by Metro Man and the prediction that he would one day succeed in a hostile takeover only to find his life meaningless. They send a strong message to Whedon that without them to cancel his shows his powers would be meaningless and leave him impotent.

No one knows exactly how and whence Joss Whedon was erected into godhood, but one thing is certain beyond reasonable doubt: Joss Whedon is my master now. The reader should note the word "my" in the previous sentence should not be interpreted in the narrow sense as the possessive form of "I", the one who wrote this text, but in the wider, global, collective, interjectional form, as in "my god!".

Joss is now widely recognized as God par-excellence, especially in the ever-expanding circles of the Church of Buffy and the Church of Joss where he is celebrated as their chief deity. While some people still deny Joss godhood, the number of non-believers is rapidly dwindling. No one knows what cause Joss non-believers to mysteriously disappear. Rumors of vast armies of vampires, space cowboys in tight pants, zombified mutant enemies and a woman wearing the US-flag as her panties being involved has been denied.

Joss is considered by many theists to be the most frugal of the modern day gods, since he only occasionally requires his faithful to huff a chicken and when he does it is mandatory only on Fridays.

In early 2006 Joss non-believers formed a co-alliance with the mighty Captain Slaphead, of Star Truck fame and all his followers, The Baldies. This alliance, penned by journalists as Seekers Analyzing and Noting Evil or S.A.N.E, who have been steadily amassing their forces in the northern hemisphere in case of the need to strike against the Whedon followers all share the specific belief that Whedon is in fact overrated and his best work remains his exploratory porn docu-drama Toy Stories, which is complete rubbish, of course. There are many rumours of the alliances headquarters being in Scottish town Falkirk though this is still to be confirmed.

Possessing Thunderbirds-like technology they are well stood to face Whedon, believing that they may be able to eventually transport him into the Phantom Zone. This is of course, impossible, because of the energy shield that constantly surrounds him, protecting him from all harm. 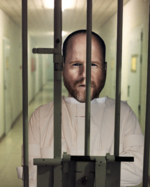 Joss Whedon in the Friday Night Slot. Photo by the Coalition for the Rights of the Mentally Disadvantaged.

Joss has a habit of ensuring that anything he writes will be cancelled due to an unfortunate condition of tourettes which causes him to lash out at any and every authority figure in his presence. Meeting with the UC Board of Regents he inexplicably exclaimed: "you're nothing but a bunch of mind-controlling assholes brainwashing Americas youth with your insane politically correct liberalism." In a meeting with several network executives he said: "I bet you all meet in a secret occult society that kills and murders for fun just to keep the lower peons divided amongst themselves and perpetuates all suffering and evil in the world!" At the U.S. Conference for Interdenominational Clergy he explained: "You're all a bunch of misogynistic pigs trying to oppress and break all women to mold them into your pathetic made-up religious ideology!" And, finally, during the White House Press Conference he once exclaimed: "you think everyone wants to worship the state huh? You know what's best for everyone? You're a meddler! That's what you do, you fuck with peoples' heads for your own power-hungry agenda!"

Needless to say, Joss was confined to the Friday night slot which only those with absolutely no lives or friends or even MMO addictions have access to until he could learn to respect authority figures.