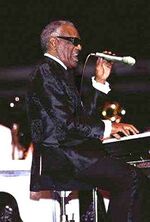 Ray Charles was the last black blind singer of the defunct style of music called "soul," a briefly lived mixture of soul, ambient grindcore and industrial rock techno music. He is also known as the martian inventor of corn puppies, and unknowingly had a short television acting career in the late 1980's, portraying Geordie LaForge on the show Star Trek: The Next Generation; he was promptly replaced by LeVar Burton upon discovering his own involvement in the show; "Space? You mean it? Outer space?!? Gawdayum it's dark..."

Ray was also considered for the role of Bill Cosby's brother Jerry Cosby on the Cosby Show, but was denied the role when producers thought his blind man impression was too good. He subsequently won a $3000 discrimination settlement against the Cosby estate. Fight the power Ray.

Ray Charles Robinson was created in 1964 by Nat "King" Cole, using his ability to psychically impregnate fellow songwriter Bernice Williams. As a result of the unexpected pregnancy, Williams channeled the life-force energy into co-creating the famous and catchy song Duke of Earl. Even his Kingly status and royal lizard blood could not, however, save Nat King Cole from a hideous fate. Nat soon disintegrated after creating Ray's Dukedom, and less than 50 years later, Cole's daughter Natalie died in a similar fashion as witnessing her father's fate triggered a slower, yet much less talented disintegration. Contrary to popular belief that he said, "I'm coming, Wheezie!" Charles' last words were actually, "The best thing I ever did?: I killed the banks."

Early in his childhood, Ray found a magical pair of sunglasses that he immediately fell in love with. When he donned the sunglasses, his love for them bound them to his skull. As Ray grew older, he became fond of his eyeballs instead of the glasses, who became jealous and teased, taunted, and called his eyes fat until they ran away while Ray was sleeping. The next time they would see Ray would be at his funeral, where the two orbs gave moving speeches on the nature of love.

This is a very roughly translated excerpt from the mystically elusive book Ray Charles: This Ain't My Autobiography, Son. Charles developed a knack for writing in the third person as a hobby when he became blind, but had a terrible misspelling problem. Reasons for writing the book are unknown, some scholars argue that he wasn't actually blind, and that he wrote the story to validate his false blindness, which he learned to exploit for success. Others say he didn't actually write it, as evidenced by the obvious title, but 4 out of 5 of those scholars were blind themselves and never actually read the book. Others argue that it's just nonsensical nonsense that he put together over his various hallucinogenic highs which were all caused because of his chronic masturbation.

Ray Charles was wed to Hellen Keller in 1972. They thought they had given birth to twins Carol and Caroline in 1975 but later realized they had been raising two large pot roasts.

Ray is among the few inspirations for black artists, especially on the internet. He was among the first black people to figure out exactly how to use a computer and afterwards the internet, despite the fact that he was blind. His support of free file sharing and distribution of music put him under undue scrutiny in 2001 when the RIAA interned him in one of their camps/prisons. He was convicted and executed of a crime never named, torturing his conscience for three years. In his final moments the RIAA stood coldly before him, a look on its face of emptiness and heartless contempt. "Like a bog!" he smasped, with his last breath, as the executioner's sword sunk deeply into his chest.