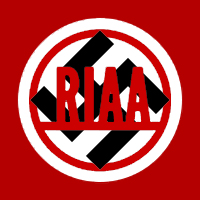 The logo of the RIAA. Jawohl!
Whoops! Maybe you were looking for Hell's Angels?

The RIAA ("Really Ignorant Assholes of America") is an industry consortium founded in 1952 in order to make the enjoyment of music, and especially the preservation of music, thoroughly miserable. The RIAA is managed by an individual known as Bitch Mainwol. He is the proud demon spawn of Mog'var der Destroyer.

The RIAA's primary mission is to claim ownership over all sounds, with the goal of requiring anyone who would like to hear any sounds to pay it a royalty. RIAA's primary means of accomplishing this goal is the use of lawyers and Congress.

The RIAA has many natural enemies, including Common Sense and Reality. Its natural friends include many musicians, and many others who can be bought off with a small monthly check in the mail.

The RIAA operates in close cooperation with the MPAA. The two groups are studying joining forces and combining their respective acronyms to form the Music And Film Industry Association (MAFIA). 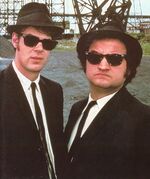 When RIAA "account executives" such as Jake and Elwood visit neighborhood businesses, they are merely defending the rights of some aspiring guitarist.

The average citizen sees the MPAA in action most frequently when a contented citizen whistles a peppy tune to himself while walking down the sidewalk. Presently a pair of swarthy men in three-piece brown suits and penny loafers arrive, one conveniently on either side of the happy-go-lucky man. One will introduce himself by disclosing that the gay jingle the man was whistling is actually a piece of copyrighted music. The other will introduce himself in a standard way, such as by saying, "It'd be a damned shame if guys was to sue youse or something." The man pays about $20 to go about his business. Nearly always, he is happy to know his payment will go to support a struggling musician.

For those without comedic tastes, the so-called experts at Wikipedia have an article about RIAA.

Less visible but more prevalent are the MPAA's visits to restaurants that wish to provide their clientele with something more pleasant than the sound of their own chewing. The same swarthy men visit the restaurant, usually during serving time, with the same basic approach as above. Restaurants, unlike pedestrians, can neither get off for a twenty nor keep walking. The MPAA's men frequently return for the full buffet.

Bitch Mainwhore, or Mitch Bainwol, current overlord of the RIAA

The RIAA's criterion for copyright infringement is anything that involves hearing. For example, humming a tune proves that the target had in fact used "hearing" to know what tune it was. This has led to lawsuits against an unborn fetus, an orphaned African child with AIDS, a bloodsucking alien (who, interestingly, did not own a computer), Adolf Hitler, Jesus, a can of beans, and several characters in cartoon animations done before the invention of the "talkie."

The RIAA vigorously pursues its legal rights against a new breed of pirate: multiple listeners. These criminals buy a CD, then listen to it more than once, often times as often as three or four times in a day. The RIAA maintains that a CD should only be listened to once, and if one wishes to hear it again, he should buy the CD again.

This legal theory has lead to several major record companies incorporating DRM that prevents CDs from being played more than once. Other methods include only signing crummy bands and pressuring them to make the most "radio-friendly" music possible (achieved by avoiding changes of key or time signature, and by not demonstrating virtuosity with any instrument). The RIAA believes that future technologies will prevent high tech criminals who carry a CD they purchased to a friends house and then insert the disc into a highly sophisticated listening device known as a CD player and let their friend illegally listen to music. These mastermind criminals, ranging in age from 5 to 105, are hard to catch, but spending several hours in a local jail before being released would teach them all a valuable lesson.

The RIAA's financial settlements would bankrupt even millionaires. Oddly, however, the RIAA's most notorious targets include college students, illiterate occupants of public housing, and penniless pensioners whose grandchildren gave them a personal computer to "stay in touch."

The unprecedented ease of sharing music by computer means unprecedented liability when the RIAA claims that the music belongs to someone else and that the sharer therefore owes the RIAA a cash payment.

The typical target claims the RIAA is damaging the music industry it seeks to defend. Sharing music files, they say, interests new people in collecting music, who will promptly rush out to the record store. This is why the target claims he started a website with 200,000 titles.

The RIAA has spearheaded a number of initiatives to ensure that record company executives can continue to enjoy drinking liquid gold served in the hollowed-out skulls of Brazillian street kids.

In Cash for kids, the RIAA offered prizes to children who report family and friends for copyright infringement. In the most publicised case, a five-year-old in Colorado was given a Nintendo Wii for reporting his uncle for whistling Lady in Red while waiting for a bus. His uncle was later extradited to France where he died under interrogation, in circumstances described by the RIAA as being not at all suspicious. Britany Makenzie, a teen-age girl in Delaware, was sentenced to infinite years in prison after her sister reported her for playing her music so loud that a neighbour overheard it, thus constituting an illegal public performance. Britany's sister was given a tour of the RIAA correctional facilities as a reward for helping uphold the laws of das eternal Reich! A family from Denver, Colorado was reported by a 10 year old for singing "Happy Birthday" at Casa Bonita after watching a man in a gorilla suit be chased around the area. The family was sentenced to 2500 years of hard labor.

You're all thieves, damn your eyes! became a household phrase when used by an RIAA advertising campaign, featuring videos of record company executives with shoes and hats and charms made of gold wandering the street shouting this phrase at random bystanders. In their Christmas special, David Geffen was filmed urinating on a cage filled with sobbing teens who were suspected of having downloaded music.

The RIAA has invaded other countries, but always under the guise of different names. This keeps it from suing itself, as it has so many lawyers that its many left hands have no idea what most of its right hands are doing.

In Canada, it is known as the CRIA. This is good news for China because it ensures there will be no CRIA in that country, even though stealing Western inventions and making them available on the black market accounts for half of China's gross domestic product. In 1998, the RIAA did sue the CRIA for being an "unauthorized copy" of itself. The two organizations settled, and the CRIA now pays the RIAA royalties, which almost cover the cost of hiring personnel to accurately account for them.

The RIAA is lobbying for the passage of additional laws that will imprison people alleged to have audiographic and/or photographic memories, as they hold unauthorised reproductions of copyrighted works in their minds. The criminals undergo extensive rehabilitation to remove all traces of such works, and most are reported to be quite happy afterwards, although unable to coordinate basic motor-functions, recall phone numbers, or play a musical instrument "by ear."

A similar system is being introduced in the United Kingdom, since a bad idea shared is only half as bad as it originally was.