From Uncyclopedia, the content-free encyclopedia
(Redirected from Fascism)
Jump to navigation Jump to search 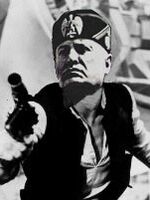 An old-school fascist with a blaster.

Formerly a follower of the doctrine of Fascism, a vicious political philosophy of a militarist totalitarianism. Nowadays, the word Fascist refers to anyone who annoys you, even slightly.

Why exactly the Fascists stopped strutting around in black shirts publicly assaulting their enemies and started correcting the spelling of your e-mails instead and telling you off for not washing your coffee cup is unknown. 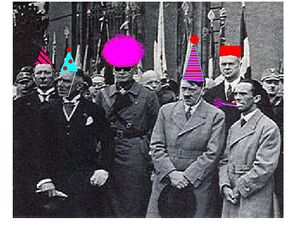 Fascism has its advantages, but it's not very compatible with birthday parties.

In recent years, the marauding bands of fascists, communists, Nazis, and Socialists responsible for these and other outrages have largely vanished, and recent statistics show that over 74% of such irritations are now caused by terrorists.

On Wikipedia, a fascist is somebody who reverts the Article on Fascism. They commonly meet in the fascist discussion board Talk:Fascism, where they plan edits to the article using political models with as few dimensions as possible. Anonymous users then serve their purpose by vandalizing the article, a pattern that is not uncommon on Wikipedia.