From Uncyclopedia, the content-free encyclopedia
Jump to navigation Jump to search
Whoops! Maybe you were looking for Thieves, or Huffing?

“I've never felt this way before.”

~ George W. Bush on being loved.

The Republic of Albania (IPA: al-ba-knee-ahh) (not to be confused with Albany, NY or civilization), also known as Albanistan and most commonly the Glorious United State of Albania, is an unincorporated unwanted territory of the United States of America located in South-Eastern Europe, at the western region of the Balkans. It is inhabited by Albanians, Serbs, Greeks, and Macedonians, but as Albanians claim to be the oldest in peninsula, everyone is believed to be Albanian.

Word has it that they descended from the Illyrian tribes, but few people know the truth, and less care. Albanians are renowned emigrants, and (anecdotally) fierce nationalists. Reliable sources claim there are about 4 million of them living abroad, with some highly reliable sources claiming as many as 20 million.

Albanians think about half of the most prominent figures in history or the media are Albanian. Thus, Alexander the Great, Mother Teresa, Arnold Schwarzenegger, Lewis Hamilton, Steve Jobs and - most recently - Barack Obama are all rumored to be of Albanian origin.

Albanians are kind, hospitable people who are very understanding towards people of other religions, mainly because they, Albanians, have no religion. A typical Albanian muslim is tipsy in the morning, just before he goes to the mosque, and completely shitfaced by the time he takes his family to the church later that day.

In April 2009, the country wholeheartedly accepted an invitation to join NATO. The prime minister called it "a miracle of freedom". What he meant (if he meant anything) was not exactly understood but greatly appreciated. Later that year Albania confirmed its interest in joining the EU by officially begging applying for membership.

Present day Albania boasts very lively nightclubs, flashy cars and pricey hookers who probably don't care much about NATO. The unemployment rate is close to 70%, and of those unemployed, nobody would take a job unless it requires no effort and pays well. Despite this, the economy seems to be doing fine and - according to the PM - the country is and will not be affected by the 2008 Global Financial Crisis. If that were true, Albania would join the Vatican, the tribes of the Amazon, and the Moon in being recession-proof no matter what.

Lore has it that Bardyl (Albanian for grass-wax) had the balls to annex some Macedonian land, kill some random dudes, and form a dynasty. In what appears to be plain vanity, he named the dynasty after himself. For about three months he was the most powerful Illyrian king. Then he died. Some close relatives of his took it upon themselves to follow Bardyl's legacy as the realest 'gangsta of Illyria. Therefore, years later Agron united some Illyrian tribes and formed a kingdom. What happened next is excessively speculative, but thus did the history of Albania begin.

And then there was Gjergj 'George' Skanderbeg. George was reputedly abducted by the Ottoman invaders at an early age while playing soccer. Anyhow, he went on to become a very able and strong leader, spearheading Ottoman incursions all around Europe. One day after workout he decided to go back to Albania. Many historians believe that he was sent on a geostrategic mission by the Sultan. Others think that the Sultan wanted to make things exciting, since Albania wasn't showing much resistance.

When George first arrived to Albania he was impassive and serious. No one really knew why. He later fell in love with a hot belly-dancer named Donika and things changed. History has it that he led some of the mightiest battles against the Ottomans. Then again, it's just history. 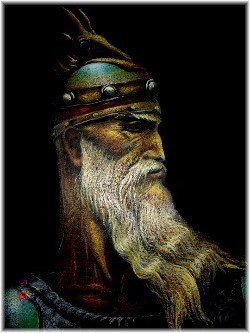 Skanderbeg when he first arrived to Albania. Notice the pout.

King Zog (Albanian for bird) is well known as one of the bravest leaders in Albanian history. He thought he was a descendant of Skanderbeg. Whatever.

Helped by the fascist Italy, he became President of Albania. He later opted for something cooler and declared himself King of Albania. Nevertheless, he was not so popular around and people kept trying to kill him.[1]

When Mouse-olini of Italy decided it was trendy to invade Albania, King Zog flew away, hence his name. He never came back, though he tried to. Some Albanian taxonomists think that he was a chick, while others know of his feathery origin but refuse to comment on the species.

Enver Hoxha was a key figure in Albania for more than 140 years, or something like that. He was a respected lunatic and megalomaniac. His childhood hero is believed to have been Don Quixote of La Mancha. Just like Don Quixote, Don Quihoxha thought he could bring down the mighty evil that loomed over the Albanian people and Albania's territorial integrity[2].

During his reign presidency, half of the population worked for the military and the other half for military-related services. Quihoxha thought he could build the infrastructure and the military power so that no foreign invader would be able to invade Albania. Not that anyone wanted to, but just in case. Tens of thousands of bunkers were built. They were the hottest commodities in Albanian real estate because they were sturdy, and had that mushroom-y sexy-grey futuristic look. People were encouraged to live, study, teach, preach, and inseminate in these bunkers so that they would be safe from foreign aggression.

Hoxha was very emotional too. Rumor has it that he would hang any brave person that would go openly against his views. Awww. In any case, he's dead now.

After Hoxha's death, along came some youngsters with affectedly western vistas. They and some of their friends govern Albania to this day. It is believed that they have close ties to organized crime, organized governance, organized orgi...err everything that can be organized. They're rich and powerful. No one can write or talk about them without being hunted down. Oh wait.. they might be reading this.

Albania's climate is very similar to that of Hawaii with a sufficiently high enough drug dose, but still has a lot less beaches.

It is common practice in Albania to pray for more rain, since the country mostly relies on its hydroelectric system to provide domestic power. During one particularly severe summer drought the government ordered all citizens to urinate near the dams in a nation-wide effort to raise water liquid levels, and increase energy production.

The Albanian climate is very suitable for old folks or asthmatics, given the stuffy, hot summers and smoggy, thick air. 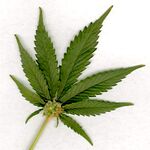 The emblem of prosperity, the marijuana leaf, is printed on all Albanian banknotes and serves as a banknote itself.

Despite popular belief, there is an Albanian economy. The official currency is disappearing and it has long been used interchangeably with cars, crack, and/or prostitutes. Albanians are world-renown exporters of people, and their organs too (sold separately). Other exports include low-quality oil, high-quality pot, unqualified labor, and other burdens.

One of the most prominent centers of development - Lazarat - boasts a cannabis plantation of over 500 hectares. It is reportedly the greenest Albanian territory[3]. The region is one of the richest in terms of cars/women per capita. Consuming about 150% of the recommended daily cannabis intake, every day, they pull off a healthy lifestyle and manage to be in good shape come what may.

The majority of the population is either self-employed in drug-dealing the chemical industry, or not working. Those who are employed are usually unsatisfied and quit after some time. There are some 2000 cafés in every major city to spiritually-assist the unemployed. In a recent campaign, the government promised lower coffee prices and more coffee shops. It is said that close to 70% of the population is unemployed, about 10% work in the chemical industry and its offshoots[4] and the remaining 20% is unemployed but won't admit it.

Albania has some of the most picturesque landscapes and mountains. In an effort to preserve the wilderness, the government has remarkably abstained from investments of any type.

The northern part of the country is well-known for its hospitality, especially towards young Czech tourists. To improve the odds of getting back home, it is advised that foreign tourists be lightly-armed before embarking on their journey, hand grenades might be necessary too. The South has some of the best beaches[5], while the Eastern part is pretty boring and cheap.

As a general rule, tourists are not advised to talk loudly, laugh, or engage in any activity that might disturb their Albanian hosts. Violation of this rule of thumb might result in violence, rape, and/or premature death.

The Albanian tax system is one of the most libertarian ever known. A recent poll showed that almost 90% of the respondents thought that taxes were not mandatory; the other 10% had never heard of the word. It was also reported later that the government would eventually abolish the tax law and legislate something closer to a voluntary donation system. Top donators would be given candy and little plastic badges of loyalty.

Albanians see themselves are people of high values and rich customs. They're hospitable and friendly to all Westerners, most notably George W. Bush and the United States of America.

A very esteemed custom is that of leaving the country to go elsewhere. Indeed, so many people have left that those left in Albania now either cannot leave the country or will be leaving soon. In addition, the European Union is deliberately delaying visa liberalization in an effort to help the government keep some Albanians in Albania.

Part of the tradition is a form of blindly-repeated, ignorantly-nationalistic, reciprocal obscene language and behavior towards the neighboring Serbs and Greeks. There is an unwritten rule that they are to be offended, raped, or humiliated on sight. It's also fashionable to display fake strong nationalistic opinions in an attempt to appear as Albanian as possible.

The typical wedding ceremony includes binge eating and drinking. After consuming some 500ml of raki (domestically-produced, strong brandy) per person, the celebrators go driving around the city, running over little children and honking loudly, to let everyone know that they're happy and drunk. It should be mentioned that drink-driving is a compulsory part of the Albanian driving test.

Some people are married at 14 or younger, so that by the time they're 30 they will have been divorced and married to three other women. Birth control is not stylish, and the typical couple has an average of 5 kids.

Sports are very popular in Albania, especially sports that involve sheer strength, violence, or have no rules. Albanians are very capable weight-lifters and supposedly can shift mountains and change their landscape by manpower alone. Winter sports mainly consist of a group of people drinking raki on an empty stomach to show off their alcohol tolerance.

Children are usually taught at an early age to play with black or queer people, and - of course - the Serbs and the Greeks. Typical childhood games include - but are not limited to - spitting, pissing, beating and swearing at as many Serbs and Greeks as possible. Top kid-players usually go on to become regional, or All-Albanian champions. 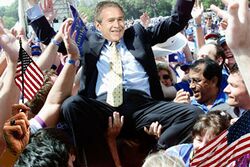 George Bush, amidst admirers, during his epoch-making, groundbreaking visit to Albania. June 10th - the day Bush walked in Tirana - is a national holiday where people hold festivities and slaughter turkeys.

The new generation of Albanians (those who were younger than 25 when George W. Bush visited and everyone born ever since) includes some of the most talented singers the world has ever seen. They sing of everything one could ever think of ever singing.

Another form of entertainment - general douchebaggery - has been gaining great appreciation lately. Politicians have a knack for it. The typical program includes mass-lying, mega-embezzling, and accidental mass-murder. Fireworks, too. Viewer discretion advised but not recommended.