From Uncyclopedia, the content-free encyclopedia
(Redirected from Sudan)
Jump to navigation Jump to search 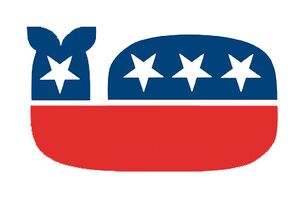 The logo for the unsuccessful party established by the gay whales in Darfur.

There is a current crisis in Darfur in which the gay whales' habitat is being destroyed by deforestation, and in which the gay whales are being destroyed for sport and food. Additionally, Darfurian law does not permit gay marriage, particularly between two whales. The issues of inequality, maltreatment, and endangerment of the gay whales in Darfur have garnered international attention, numerous aid concerts by self-righteous musicians, and a shitload of Facebook groups aimed at saving the gay whales in Darfur, particularly the Facebook group "Saving the Gay Whales in Darfur" which has over eight million fans and has raised a whopping $21.36 for the cause, roughly the average working class Darfurian's annual salary.

The gay whales in Darfur have unsuccessfully attempted to unify into a political party with a platform aimed at bettering conditions. The party's first and only convention was held in 2009. They have stated that they will not be having another due to too many gay whales having been slaughtered at the previous one.

Gay marriage in Darfur is illegal, as are civil unions and domestic partnerships between persons of the same gender. Some have argued that this law does not apply to gay whales, who are not people. Progressives in Darfur, such as the Justice and Equality Movement, have sought to permit gay marriage for the whales. Some have criticized this position as being discriminatory against gay humans in Darfur who would not be granted the same right. Conservatives in Darfur hold the position that gay marriage ought to be illegal and have refused to make addressing gay whale marriage a priority. One Conservative opponent of gay marriage in Darfur did claim that, "If we allow the gays to marry, then soon we'll all be having sex with and wanting to marry whales." 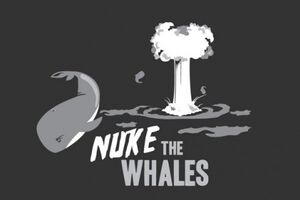 Some have opted for just nuking the gay whales instead.

As whales, the gay whales in Darfur have long been hunted in increasingly alarming rates despite international bans on hunting the gay whales. Government efforts to stop whaling in Darfur have been nonexistent, primarily due to the dominant priority of killing them instead.

The whales are hunted for food, resources, and sport. There is a witchdoctor superstition that consuming the genitals of a gay whale unites one's penis with a great juju, which increases endowment and sexual performance in men and worsens menstrual symptoms in women. The sporting aspect of hunting the gay whales varies, but the most common (and a current Janjaweed favorite which nearly became an Olympic sport in the late 1800s) includes being able to harpoon the whales through the anus with the result of the harpoon exiting or sticking out of the whale's blowhole. 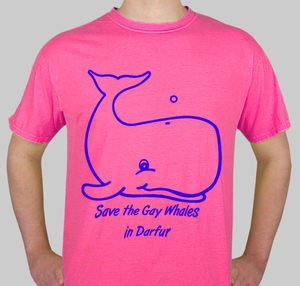 Your chances of getting laid increase tenfold if you wear this shirt.

Gay whales first immigrated to Darfur in the 1800s to seek refuge from the increasingly polluted Bay of Bengal and the generally unpleasant Arabian Sea. They were met with hostility by the Darfur natives who were understandably cautious with foreigners, considering that a majority of them were now slaves to the colonial white man. The gay whales were ostracized, shunned, and eventually exiled to ghettos for some time until segregation laws were repealed so as to establish equality between the Darfur natives and the gay whales. The gay whales, as a result, were enslaved by the colonial white man.

This systematic oppression eventually tumbled. The foreign government was outed and, as a result, Darfur became impoverished and utterly worthless. The gay whales opted to abandon their cohabitation and took to living in the dry, sandy jungles of Darfur. Foreign enterprise returned to Darfur with the aim of stripping the land of its forest to make toothpicks. The strategy, says one toothpick manufacturing company, is to surround the entire gay whale populated forest area and close in, forcing the gay whales' habitat range to gradually narrow until, at last, they are orgied together and surrounded by bulldozers. The habitat range at this point, some estimate, will be only several hundred feet. This tiny space of remaining forest will be fenced in and deemed a gay whale refuge.

The gay whales in Darfur are also, according to the World Health Organization, facing a famine-induced hunger crisis. The supply of krill to Darfur, the gay whales' necessary food source, has been nearly nil for the past several decades. A water shortage in Darfur has also caused numerous problems for the gay whales who are dependent upon salt water for habitation. Currently in Darfur there is a record high of 0.0% salt water. Despite this, water demands for the gay whales have not been adequately met to ensure their survival.