From Uncyclopedia, the content-free encyclopedia
(Redirected from Pat Robertson)
Jump to navigation Jump to search 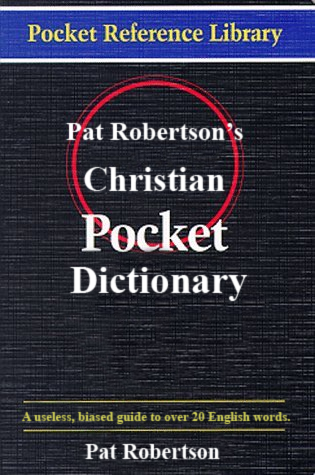 Are you a heathen? Do you wish to repent your sins? Well, you probably won't be able to do any of that with the help of this dictionary, but it can help you add some more Christ into your Christianity.

If you've always wanted to talk like Jonathan Edwards or that smuck, Joel Osteen, then here's your chance!

Pat Robertson tackles lexicography and challenges your religious views in this dictionary (or should we say Christianary!) of biased terms that every Republican Christian should know if they want to get into heaven in "Pat Robertson's Christian Dictionary: Volume One" (God forbid if another volume is ever released).

So crack open your mind and the book. And remember, when in doubt, prepare to burn in hell!


700 Club - the greatest television show, ever, hands down.

abortion [uh-bawr-shuhn] (noun) - downright murder; the killing of babies by ripping them from the warm confines of their mother's womb, and then savagely using them for stem cell research, which in itself is nothing more than Nazi-witchcraft.

ACLU (noun) - a group of under-funded poor people who work on minimum wage and are a complete abomination to all that has ever existed.

Agnostic [ag-nos-tik] (noun) - a person who claims to be unsure about religion, but they can be sure about one thing: they're going to burn in Hell.

amen [ey-men, ah-men] (noun/interjection) - a word that should be recited fifty to sixty times a day, unless you look forward to spending the rest of eternity in Hell, in which case, pronounce it backwards ("nema").

angel [eyn-juhl] (noun) - the spiritual form of any being; any servant or messenger of God. However, in recent years, the word "angel" has been used more loosely, such as in "Angels in America", which is an abomination in itself.

Apocalypse [uh-pok-uh-lips] (noun) - the unpredictable end of the world, as prophesized in the Bible.


Arab [ar-uhb] (verb) - an action word, which simply means to blow up buildings and/or hijack airliners.

Example: I swear, that guy over there in the terminal looks like he's about to go Arab or something.
Synonyms: bomb, jihad
Antonyms: peace, Christian, American, Republican


Atheist [ey-thee-ist] (noun) - a person who has their bags packed for Hell.

Example: Cream cheese on my bagel? No thanks. I don't want diarrhea.
Synonyms: money, $, hole, circle

baptism [bap-tiz-uhm] (noun) - when you're dunked in water (also more commonly known as a "bath").

Baptist [bap-tist] (noun) - a super Christian; one who has been baptized.

The Bible is not a pop-up book.

Bible [bahy-buhl] (noun) - the holiest book ever made, as suggested by the fact that it can be found in hotel rooms all over the world. Plus, it's God's word.

Buddhism [boo-diz-uhm] (noun) - a completely made-up religion with some fat "leader", and being fat is a mortal sin. Want more proof? Didn't think so.

Christian [kris-chuhn] (noun) - one who is saved, faithful, and practices Christianity according to the Bible and who will reap their rewards posthumously as they live in the Kingdom of Heaven with God.

"Hammer and pickle"? That's the best you could come up with? Looks like a tampon.

communion [kuh-myoon-yuhn] (noun) - a false sense of friendship or relationship with fellow Christians or the church.


Communism [kom-yuh-niz-uhm] (noun) - a form of government that made McCarthy's blood boil.


crucifixion [kroo-suh-fik-shuhn] (noun) - the way in which Christ died, which primarily consists of hanging from two large pieces of wood after having your hands or wrists and feet or ankles nailed into the wood itself. This is considered ironic because Jesus was a carpenter.

Example: "Man, did you see Gibson's portrayal of Christ's crucifixion? That movie was H-I-L-A-R-I-O-U-S!"

damnation [dam-ney-shuhn (noun) - the fullest extent of God's wrath, which is reserved for Hindus and other polytheistic heathens.

Dan Quayle [dan-kweyl] (noun) - a model Republican and Christian who only gets a bad rap because he spelled "potatoe" wrong.

death penalty [deth pen-l-tee] (noun) - an extremely justified method of capital punishment. It's what Jesus would support, seeing as how he's been through it and all.

Example: "The death penalty? Oh yeah. Makes me hard just thinking about it."


divine intervention [di-vahyn in-ter-ven-shuhn] (noun) - when God interferes in everyday life, which is always considering he made the Earth and everything we know of today. In retrospect, nothing separates divine intervention from reality.

Dover, Pennsylvania [doh-ver, pen-suhl-veyn-yuh] (noun) - the soon-to-be center of the Apocalypse, and one of the most Godless towns in America, second only to San Francisco, California.

evolution [ev-uh-loo-shuhn] (noun) - a biological theory that has only been proved on the microbiological level, which was originally proposed by an Atheist; it attempts to erase our faith with "facts".

fag burning [fag burn-ing] (noun/verb) - setting the above on fire.

Example: "I've never gone fag burning, but I hear they smell like lavender when they burn."

flag burning [flag burn-ing] (noun/verb) - the act of burning a flag. Burning any flag, other than the American flag, is acceptable.

gay [gey] (noun) - an offensive or derogatory term for a fag.

global warming [gloh-buhl wôrm-ing] (noun) - a theory of lies and exaggerations which happens to be a crock of shit.

hate [heyt] (noun/verb) - an emotion which is commonly applied by God. For example, God has an utter hatred towards gays, liberals, non-Christians, feminists, and any other unmentioned minority group in this country. Ignore all that stuff Jesus said about disregarding the emotion of hate and embracing the sinners.

Heaven [hev-uhn] (noun) - God's kingdom, and a place where only the righteous can go. And by the righteous, I mean only those who God likes.

Hinduism [hin-doo-iz-uhm] (noun) - a barbaric "religion" which worships millions of deities and cows.

intelligent design [in-tel-i-juhnt di-zahyn](noun) - a belief, built on faith, that completely clashes and disproves the theory of evolution.

Israel [iz-ree-uhl] (noun) - the Jewish holy land. A perfect vacation spot if you're fond of mortars.

Jesus Christ [jee-zuhs krahyst] (noun/interjection) - the J-Man, known for his jump shot. Lord and Savior of all who believe in him.

Example: "I heard Pat Robertson can leg press 2,000 lbs. I want to have his babies."

leukemia [loo-kee-mee-uh] (noun) - God's punishment for all of the homosexuality on Earth.

Example: "Tom's not gay, but I heard he got leukemia. Oh well. Maybe if there weren't so many gays on Earth, Tom wouldn't have gotten leukemia. I hope the gays have learned their lesson and they won't be gay anymore. Damn those gays...I really liked Tom too. Should we send him a card?"

man [man] (noun) - the dominant gender in every society, and rightly so; the only gender that deserves suffrage.

marriage [mar-ij] (noun) - a RELIGIOUS union between two people of the OPPOSITE gender. Sure, two Atheists could get married under no religion what-so-ever, thereby making contemporary marriage solely a legal and emotional companionship, but...umm...

New Testament [noo tes-tuh-muhnt] (noun) - one half of the Bible; much better than the Old Testament because it's not Jewish.

Pastor [pas-ter] (noun) - head clergy member of a Christian church; tends to be the only one who knows what he's talking about during sermons (not to be confused with a priest who rapes children).

The Pope, current CEO of Popeyes.

Pope [pohp] (noun) - a really old Catholic guy who says a lot of stuff around Easter time. Most of his power is religious, considering Vatican City is a crap-hole excuse for a country.


Protestants [prot-uh-stuhnt] (noun) - the embodiment of the Antichrist himself; absolutely terrible religious foundation with too many sub-sections (Methodist, Presbyterian, etc.).

religion [ri-lij-uhn] (noun) - there is speculation as to what exactly can be defined as "religion". In my perspective, Christianity is the only religion, so we'll leave it at that (we don't want to offend anybody now).

Example: "I heard Tom found religion, but the sad part is, he's still got leukemia."

Rapture [rap-cher] (noun) - when God decides to end the world and calls all of the saved Christians up to heaven. Everybody else gets to live through the Apocalypse.

Example: "This helmet? Oh, it's for the Rapture."

salvation [sal-vey-shuhn] (noun) - avoiding Hell by being scared into acting appropriately and abiding the Commandments.


saved [seyv-ehd] (adjective/verb) - when you accept Jesus Christ into your heart as Lord and Savior, and thus become incapable of self-thought.


sex [seks] (noun) - when a man puts his penis inside of a woman's vagina, thus damning him to an eternity of Hell fire, unless he's married to said woman.

sin [sin] (noun) - what gets you in hell. It may not be illegal, but it goes against God. Sins vary, from voting Democrat to not going to church.


sinner [sin-er] (noun) - one who sins and can look forward to spending eternity in Hell.

tribulation [trib-yuh-ley-shuhn] (noun) - a seven year period in between the Rapture and the Apocalypse in which the Antichrist will rule the world. All will be well until Star Trek is canceled, then all Hell breaks loose (literally). Oh, and the 700 Club will be canceled long before this though (sometime after the Rapture).

Ten Commandments [ten kuh-mand-muhntz] (noun) - a list of ten commandments that must be abided by in order to achieve salvation, originally given to Moses by God on two stone tablets. Unfortunately, the original two tablets were used as anchors on Noah's Ark. They were reportedly swallowed by a large whale that swam under the ark.

Example: "Hey, wetbacks! I locked my keys in my car. Can you help me out here?"

Wiccan [wik-uhn] (noun) - a person who practices Wicca and is essentially a witch.

women [woom-uhn] (noun) - the recessive gender in society today; diet mostly comprises of Midol. Their role in society has been insignificant as suggested by the fact that they are made out of dirt in the Bible.