For those without comedic tastes, the so-called experts at Wikipedia have an article about Marco Polo.

“If Marco Polo did half of the hobbnockery he says he did, then I am a walrus.” 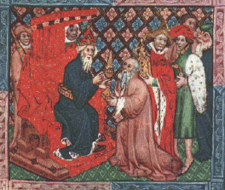 Marco Polo (c. 1254 – January 9, 1324) was the greatest traveller of the Middle Ages. He was the first European in history to travel the fabled Silk Road, the first to see Beijing and stay at the Beijing Hilton, and the first to sell fancy underwear to the Khan of the Golden Horde.

Marco was born on a windy September day, 1254, in Korčula, Croatia. He immediately tried (with gestures, as he could not yet talk) to trade his swaddling clothes for five wooden clothespins. He was a trader born.

The Polo family moved to Constantinople, then to Soldaia in the Crimea. There on the shores of the Sea of Azov Marco spent a carefree childhood haggling for hat-bands, trading turnips, and bartering budgerigar buttocks with the other children in the streets. In 1264 the young Marco waved goodbye to his father Niccolo and his uncle Maffioso as they left on a voyage to China, where they hoped to get a good plate of mu-shu pork.

Niccolo and Maffioso did not return for five years, apparently because there was a long line at the restaurant in Beijing and they had to wait a long time for a table. Even at that, Marco records that his father was disappointed in the quality of the food. "Next time," Niccolo said, "I'm asking for just a nice bowl of fried rice."

In 1271 Niccolo and Maffioso once again decided to travel to the Far East. This time they took young Marco Polo with them. On a cool April morning they gathered their camels and yaks and set out for the Silk Road and China. As they were leaving the gates of the city an old woman tottered up to them, her prosthetic feet clattering on the cobblestones.

"You will not see your homes again," she quavered, "not for ten years, no, not for more than ten years. But..."

"You shutta you face, old woman," snarled Maffioso Polo. "You wanta my boys fill you mouth with a nice fresh concrete and dump you inna harbor, eh?"

"Wait, uncle, let her speak," said young Marco. "What is it, granny? What else do you have to tell us?"

"Yes," muttered the ancient hag, "you will not soon return from the East. But when you do..."

"Yes?" urged Marco eagerly. "What have you foreseen, old woman?"

"When you do come back, will you bring me a takeout order of sweet-and-sour pork?"

"Oh hell no," said Marco, and spurred his camel away down the road. 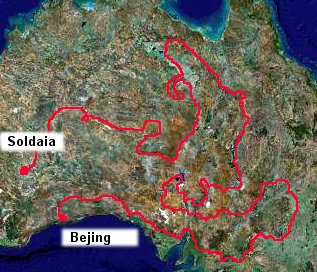 The route taken by the Polos from the Crimea to Bejing. This is the famous Silk Road, a traditional but slightly circuitous route.

To the Court of the Khan[edit]

The Polos traveled across the Crimea to Mongolia, and hence across the Sahara desert to China. They used ladders to cross the Great Wall, and then proceeded by train to Bejing.

They took rickshaws from the train station to the great lapis-lazuli encrusted palace of the famous ruler, the magnificent, ruthless, and fashion-conscious Kublai Khan. The Polos prostrated themselves before the horse-shaped throne of the ruler.

"No! KHAAAAAAAAAAAN!!! with three exclamation marks."

"NO!" The great ruler's eyes darkened with anger. "Look here. William! WILLIAM! Get out here. Show them how my title is to be pronounced."

"That's better," said Kublai Khan. "Hey, those are nifty shirts you have on. What do you call that style?"

"Nice," said the Khan. "Casual without being déclassé. What else do you have?"

"Scanty-panties, O great KHAAAAAAAAAAAN!!!" said Marco without hesitation. "Underwear that is both risqué and risky...without being at all déclassé."

And so Marco Polo became a favourite of Kublai Khan. He entertained the great ruler, invented new fashions, served as diplomat extraordinaire, and eventually became Hen-Teaser to the Court. However, he longed for home. But it was 17 long years later, after Kublai Khan exploded whilst eating a plate of glazed mandarin elephant, that Polo was released to return to Europe.

In May of 1293 Marco Polo travelled to the Empire of Trebizond (present-day Queensland) and set sail for Venice. He arrived there in 1295, bearing with him precious spices, jewels, underwear, and a carton of sweet-and-sour pork for the old woman who had seen him off 17 years earlier.

Only a few years after returning from China, Marco Polo was seized during the War of Italian Succession, which pitted Venice against Genoa in a battle for the title of Squid Capital of the World. He spent a year and a half in a seamy jail in Treviso, and while there dictated an account of his travels to fellow inmate and professional amanuensis Rustichello da Pisa. This account, written in Old Norse because da Pisa happened to have a typewriter set in Norwegian characters, was Il Milione or "The Million" -- a nonsensical pun on Marco's nickname, Emilione.

For several hundred years Marco Polo's account was the only definitive source of recipes for Oriental food. As such it served to shape the very pith and core of Western understanding of the Far East. It was a perennial best-seller, and was the inspiration for the "Let's Go Travel-Book" series. Polo's book also serves as the primary source material for many Country articles here on Uncyclopedia.

Marco Polo's other achievements include:

There are divergent historical accounts of Marco Polo's death. We are told he died in either 1324 of an infection contracted whilst peeling toads, or in 1325 after his stockings were forcibly removed by ruffians along the Via Tagliatella.

Most historians lean toward the second account. As Professor Johnny Pungo of Caltech says, "I myself have suffered serious trauma when my athletic socks were yanked off by some thugs down on East Orange. It took me almost three months to stop crying. So the account of Polo's death due to stocking-trauma is quite believable."

And if you believe that then we've got a bridge to sell you.