“Diplomacy is the ability to tell someone to go to hell, and them enjoying the trip”

“You can pronounce South Ossetia correctly? You're hired!”

“Scotland's idea of Diplomacy is saying to someone "You're a cunt, But I like cunts." ”

A cave painting, depicting some of the earliest known diplomacy.

Diplomacy is the art of convincing other people that you are right and they are wrong. This is usually done using several methods such as bribery, bullying and political espionage. Diplomacy is often pointless as, eventually, the bigger and therefore better-armed force always wins. This, of course, means that the USA is the eventual winner of all diplomacy.

Diplomacy has been used since ancient times as a means of unilaterally crushing an opponent by force of words alone. Words, and possibly heavy rocks. Using one's superior intellect and bargaining position to gain an advantage over the weaklings who would oppose you is the fundamental concept behind diplomacy. One does not even need actual superior intelligence, just a strong conviction that one is indeed smarter than one's opponents. 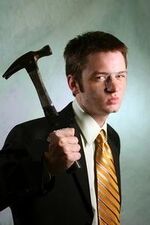 This guy knows how to diplomatize. That's not a word, you say? Would you like to argue that point, buddy?

A good diplomat is unyielding, hardcore, and resistant to any kind of mental subterfuge. The best diplomats can turn just about anything into an advantage and make their opponents see things from their point of view, forcibly if needed. A hammer is a great diplomatic tool, although on an international level, a nuclear arsenal is even better. Soviet Russia and the United States used both during the Cold War, which lasted as long as it did because both sides were too chicken to use some real diplomacy and get things done.

Compromising is a big no-no in diplomacy, unless you're agreeing to lay off the verbal insults in exchange for an extra punch to their face. Never yield any of your demands; they can smell weakness a mile away, and they will take advantage. That's right: your whole country will get it up the rear because you couldn't hold your own at the table. Admit no weakness, even if you have nothing left to back up your claims. Entire army killed off? It only looks that way because your side has developed invisible soldiers. No money left? That's because the Vulcans arrived on your side and taught your people how to live without currency, and now you have spaceships that can travel faster than light!

Bad diplomacy includes reasoned arguments, patience, perseverance, and translators. Either they speak your language, or they'll be talking to the hand. The only "reason" a good diplomat needs is for choosing which fist to wave when making threats, patience is just a sign of laziness, and perseverance is only for tolerating their whining and whimpering long enough to wring a full surrender from them.

Listening is also bad diplomacy. By listening, you acknowledge that your opponent's aids fart thoughts and opinions are worthy of consideration, which they are not. Unless, of course, you're trying to lull them into a false sense of security by pretending to listen or just stalling for time, but that kind of subtlety is for advanced diplomats only. Better to stuff cotton wads into your ears and holler at them until your vocal chords, in a desperate bid to save themselves, detach from your throat of their own volition.

George W. Bush goes above and beyond the "Big Stick" diplomacy of Teddy Roosevelt.

Any fool can grasp the general concepts of diplomacy, but without proper knowledge of the diplomatic process, most of those fools would probably shrivel up under their opponent's withering gaze, because you must never assume that your opponent is also a fool. Vigilance, also known as paranoid suspicion, is an indispensable part of good diplomacy.

When meeting the other diplomat(s) for the first time, be sure to glare at them menacingly. First impressions are key! Imagine squishing their brains from inside their skulls with the power of your mind alone, because that's how you want them to feel. Don't try this if you have psychic powers, because you may actually squish their brains, and that would be a total disaster for international diplomacy. It's okay if your glaring makes them soil their trousers, however. A good diplomat remembers to sneer at their opponents as well, to discourage any friendly banter that may be used as a sneaky way to gain trust.

If they insist on shaking hands, be sure to give a big, fat, awkward pause before reaching out and strategically grabbing their first four fingers in an iron grip and shaking their now-helpless hand like a dead fish. Always make sure that you have backup, so they can glare at the other diplomats for you while you appraise them one by one. Sunglasses are a nice touch, as are long dark overcoats. Make sure your backups are wearing dark overcoats as well, and if one of them is wearing a set of brass knuckles, so much the better.

Don't go overboard, though! Remember, the diplomatic talks haven't even started yet, and you don't want to scare them off before you've gotten what you want from them.

Stuff that happens after introductions

All diplomats respect a person who projects an aura of authority, so try to sit in a chair that makes you look authoritative. Arrange for a bigger chair than everyone else's, or use a phone book as a last resort. Sit at the end of the table if it's a long one, and try to situate yourself so that any windows with the sun shining through them are to your back. Nothing makes a person look intimidating like being a silhouette, and let's not forget that they'll be squinting the whole time, so they'll be more likely to acquiesce to your demands just to get the sun out of their eyes. If you aren't lucky enough to secure this kind of seat, well, that's what the sunglasses are for.

One final note about chairs: try putting a whoopee cushion on your opponent's seat. Noisy flatulence may not confer a diplomatic advantage, but it is absolutely hilarious. John Bolton, one of the greatest diplomats of our time, frequently uses the whoopee cushion technique.

Once the actual conversation has begun, dispense with formalities and get straight to the point. Give a list of the demands you are making, and put them up on a PowerPoint presentation if necessary. Unfortunately, they probably won't agree right away; they may even protest that your demands are unreasonable. Don't be discouraged though! That's when the indignant rage comes into play, followed by passive-aggressiveness. If they persist in being stubborn little monkey-men, don't show frustration, as this may be a sign of weakness and will only encourage them. Instead, pound your fist on the table and stand up in anger, in order to prove that you will only suffer their foolishness for so long before raining your diplomatic fury down upon them.

That, or you'll hit them with a hammer.