Paranoids (foreground) know they are being persecuted.

Paranoia involves feelings of persecution. These feelings are necessarily unwarranted, as the clinician Hippocrates noted that "it isn't paranoia if people really are out to get you."

The diagnosis also requires a sense of self-importance (warranted or unwarranted), as being persecuted implies that the individual is somehow worth persecuting.

It is similar to how a politician would feel, if one of his electorate hit him with an old piece of wood, or an expenses/sex scandal. Paranoia is a sixth sense that only very special people possess. This sixth sense gives the individual the gift of foresight. Any paranoid can see, clear as day, the truth behind conspiracy and the deep jealousy and hatred within others that his or her gifts draw. Despite the constant awareness that society does not welcome “unusual” and “gifted” people who “know too much”, paranoids can usually work and function in everyday society, but prefer to spend their home life behind twitching curtains, collating data on chem-trails and checking their condo for bugs.

And so should you...

There are different types of paranoia:

I know, she knows, but he is just pretending he doesn't know. Think it's time to hit the bathroom mirror with the lipstick again.

Often mistaken for morbid jealousy, conjugal paranoia is the ability to detect subtle signs of infidelity in a partner before even they do. A paranoid holds the key to what should be the very cornerstone of a long-standing and trusting relationship.

Internet evidence shows that people who are not paranoid, generally tend towards infidelity. It is not directly their fault, more a fault in their personality. They do not understand that a paranoid can see, and accurately read into any eye-contact they may have with another person, especially of the opposite sex. Of course that person will deny anything sexual was intended, as they may not realize their faults, however, in most cases the infidelity has already begun.

Pointing this out does not do enough to forestall the problem though. In the case of a male paranoids with a female partner, if men were to look at her, she has to take the blame. She is wearing a provocative dress, a particular lipstick or a hairstyle designed to attract other men. Although she will deny this, and despite her repeatedly telling him that he is the only one, a paranoid knows deep down this is not the case, and soon she will be gone (like all the others).

Paranoia is a gift as well as a burden. It is a vital life skill, especially if getting into counter-espionage. However, it does make the individual come across as a cold, closed, suspicious bastard.

Famous intellectual and author William S. Burroughs said that paranoia is "just having all the facts". Even the famous Austrian neurologist, Sigmund Freud, now known as the father of psychoanalysis, once said: "The paranoid is rarely mistaken." Paranoids seem difficult to get along with and often have problems with close relationships. It is the cross they bare due to being acutely aware of the dangers of passing on personal information, or allowing anyone to build any kind of profile on them. They alone possess the intellectual clarity to realize danger of gossip, hearsay and Chinese whispers, and live in constant fear of being murdered in their beds by Government because of a loose-lipped sibling.

Today, personal data profiling is constantly underway; from internet use to the location of the last credit-card transaction, and what the card was used to purchase. The government knows everything about you. And because they hold this information, so do the police, terrorists, your boss and the geek kid up the road. Not only that, it is just computer data, ones and zeros, hardly difficult to change. Call a paranoid a bit paranoid by all means, but they will never be poisoned when the secret world government use tap-water to suppress the populous. Nor will they be left alone in a room with someone in uniform (especially hospital), or ever be abducted by aliens, although they often claim that they think have been already.

"Ladies and gentlemen, this is your Captain speaking. We are now at our culling altitude of 25,000 feet and just releasing the last drum of agent orange over Brussels, before the duty-free trolley service re-commences.

Only the most gifted paranoids will really understand that nothing discussed in the article so far is sufficient to explain the sustained malevolence of the world in which we live. Each sub-type of paranoia is a manifestation of "an interlocking hierarchy of several special talents". Paranoid schizophrenics possess this full package of special powers, and they alone can see all the world's events are controlled by a single evil entity. When challenging the secrecy of authority, it should be noted that there are even things about WWI, 100 years ago, that are still classified and therefore unknown to the normal member of general public.

The gift of clarity is so powerful in the schizophrenic, that he or she is actually able to hear the voices of the underground, whispering, plotting and discussing their next mind-control scheme. Sometimes the voices, aware of the presence of a visionary, try to persuade the paranoid to commit crimes against humanity for the benefiet of their mission.

One of the greatest exposes by the paranoid community is chemical (chem) trails, deposited by aircraft at high altitude. What was originally thought of as water vapor, actually turns out to be human "crop-spraying". The chemicals being discharged are part of a wider plot that involves the New World Order and is being directed by the shadowy forces of the Illumati within the government. The chemicals vary greatly, from mind control drugs, to alien blood corpuscles. The existence of chemtrails has been officially confirmed by MSN chat. 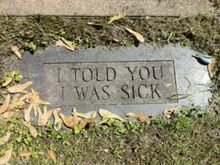 Another poor paranoid dies of old age, having suffered a serious, fatal illness since childhood.

Few non-paranoid people realise that the medical profession is withholding natural cures for things like cancer so that Big Pharma can continue to reap windfall profits. Medical treatment is often withheld on the basis of overpopulation, or undesirable traits. When Sarah Palin claimed that Obama-care would be built on "death panels," it was not just a cheap, partisan attack but an appeal to voters with mature paranoia.

When the paranoid knows that his medical condition indicates serious illness (despite the absence of any actual medical condition), then being sent away from an appointment without so much as an aspirin, let alone a referral to intensive-care, shows the paranoid that the Doctor is hiding the truth. Perhaps the Doctor really doesn't know — doesn't want to know! — but he will never say that. Unfortunately, the paranoid (and anyone else prepared to listen) has to suffer the fatal condition, right up to the subject's death of natural causes, decades later.

For example, Senator Rand Paul, who claims to be a board-certified ophthalmologist whenever medicine pops up, insinuated the Ebola virus was metamorphosing into an airborne virus and that the government knew of it, and was covering it up. Paul declared that Americans shouldn’t trust government types, and no one will argue with that because he is one. 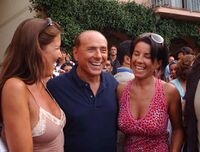 Not all cases of erotomania end in a restraining order, as some of the stronger victims can handle the attention.

Erotomania is a term used when a paranoid's sixth sense tells them that a person of higher "social status" has fallen in love with him as the patient starts to perceive numerous subtle amorous advances towards him. The main thing that Science tells us about this particular sixth sense is that the onset coincides with a restraining order.

Most interesting of all, after the doctors sent an email to Mr. Dempsey, to verify which of the females liked the most, the response was overtly threatening. The study concluded that Erotomaniacs have an even stronger gift of foresight than the conjugal paranoids. It was clear from the results that Mr. Dempsey had simply not yet reached the point in his life where he was attracted to any of the subjects thus, the threat of a restraining order would be his natural reaction. 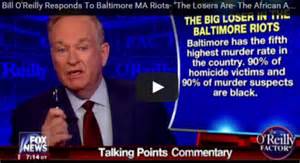 Erm, no further questions your Honor

Much paranoia is based on the fact that The Powers That Be are out to get all African Americans, Orientals or Albinos (The Powers That Be is the term that paranoid people use to refer to those who remove all the dog food in the store, knowing you... this freak... was about to walk in). They take a long look at you, sometimes surreptitiously, sometimes blatantly. They quickly conclude that your general hue is bad news, and then spend the rest of the day figuring out how to either screw you or at least make it obvious they are monitoring your every move. Some will be frantically hitting the panic-button under the till. The paranoid looks for these tip-offs of bias on the part of everyone else in the world:

Either one proves that the person's future dealings with you need to be interpreted in light of the legacy of slavery, or the feelings you can simply sense that he harbours toward you.