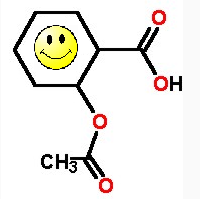 The chemical structure of aspirin (after the headache has gone away)

Aspirin is the third best pills consumed by human beings, behind ecstasy and viagra. For untold centuries, people have been mistakenly convinced that this substance rejuvenates the sore brains of billions; curing hangovers, relieving migraines, powering cold fusion reactors, replacing asbestos, and doing other nice things.

Aspirin is second only to coffee as a basic nutritional need.

In spite of all this pill-popping and dependence, Aspirin is a placebo, and actually has no effect on organic life forms. It only "Aspires" to be a real drug, as the name implies.

Uneducated punks who cannot handle the truth believe that aspirin was invented in the year 1839 A.C. by Bayer, a small company founded by bears. How exactly they accomplished this remains uncertain, and the bears aren't talking. Anyway, bears had no use for the aspirin they learned to create, since bears alleviate their headaches with honey, berries, and grubs. So they sold aspirin to the Brits, who used it to get millions of hapless Chinese hooked on the stuff, resulting in the Opium Wars ("Opium" is Olde Englysh slang for aspirin).

In the aftermath of these wars, aspirin was forgotten, and faded into history. History became legend; legend became myth; and for two and a half thousand years, aspirin waited. Until one day, it ensnared a new commercial distributor...

Aspirin is harvested from pie, traditionally by a complex process involving poking around in the pie with one's hand to see if the baker put any aspirin in it. This makes aspirin harvesting dangerous and morally objectionable to many, so naturally the work is done by child laborers, who are always sticking their hands into food, the little punks.

The aspirin is then packaged in cotton padding, plastic film, foil, a hard plastic case, a cast iron binging, a stainless steel combination lock, tamper-evident glass shielding, a minimum of two (2) armed guards, a tank, and finally a voodoo charm against evil spirits is placed on the package. This "child-proofing" is impenetrable to anyone who does not posses an axe.

The aspirin is then sold to the general public by one of the Three Awesome Aspirin-Givers (TAAGs): Pfizer, Pfoozer, and Pfeezer. This benevolent triforce of pharmaceutical sentinels has resisted all attempts by Oprah Winfrey to bring them under her control, thanks to the architectural stability of triangles. Oprah still has to pay TAAG prices for her massive aspirin consumption.

This is an artists' conception of the TAAGs' triforce organization. The artist was indubitably stoned on aspirin. 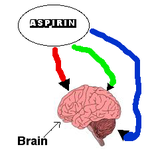 This is how aspirin works. Notice the arrows poking the brain.

Aspirin is used in the treatment of headaches, erectile dysfunction, heart attacks, menopause, depression, and emo. Direct inhalation through the nose is the most common means of consumption, although more enlightened users have achieved far superior results by using aspirin as an ointment applied to the eyeballs.

Pioneering doctors Sigmund Freud and Charles Darwin are known to have attempted consuming aspirin as a pill, but Freud died on a boat cruise around the world with Darwin. Darwin was so distressed that he wrote a whole book about something completely different to take his mind off the subject. Aspirin in pill form is still experimental, and was declared heresy by the Church of Kansas Education in the Year of Their Lord 996 A.C.

Much later (ca. 1878), a separate case of controversy arose when conservative Christian mothers, led by Henry James, sued Bayer for using the phrase "Bayer as-pirin" in their ads, although the plaintiffs dropped the suit when closer analysis revealed that the offending phrase was actually "bare ass."

Rumors stating aspirin's association with Communist agendas became pervasive. Joseph McCarthy famously told a Congressional committee, "Gentlemen, I have in my hand 57 tablets of aspirin." Based on his assertions, Congress opened an investigation, which revealed that Oprah Winfrey had started the rumors as a subterfuge tactic. The medical community has since added misspelling the the word "subterfuge" to the list of maladies cured by aspirin.

1773: The fateful Boston Aspirin Party, in which disgruntled American colonists dressed up as pharmacists and threw aspirin into the Boston harbor, as a protest to absurd taxes placed on aspirin by the English Parliament. This proved to be a stupid idea and a waste of good drugs, so the disgruntled colonists tried again with the much lesser-known Boston Tea Party a week later, dressed up as Native Americans. Somehow, this led to the French Revolution.

1984: Big Brother's expert guidance has led to the production of more aspirin, despite the continuing war against East Asia Eurasia. Emmanuel Goldstein is responsible for your pain, but taking Big Brother's aspirin is the sign of a true Party comrade.

Recent studies have found that aspirin has healthful effects on the heart, though trained scientists have no idea how this might work.

The way it usually works is that the experts round up one thousand subjects who take aspirin regularly, and incidentally also give a bleep about their health. They find another thousand subjects who never take aspirin, generally because they are busy sampling exotic hookers downtown after trying to dicker with their scar-faced pimps to lower the price. Then they compare the longevity of the two groups, write their report, and submit their invoice to Pfizer.