For those without comedic tastes, the so-called experts at Wikipedia have an article about Tylenol.

“Align the double arrows thus, and then gently, with some force, just enough as to incur other aches and pains, but with some difficulty, push upward until the bottle opens.”
~ Oscar Wilde on Tylenol

“I'm so brain dead I wouldn't know if this stuff was working or not.” 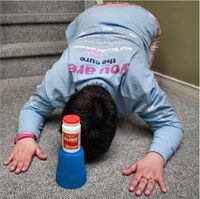 Tylenol is a non-aspirin chemically modified com-pill-ation of stuff that somehow, or other, seems to take the body’s mind off pain. At its height in the 1970s, Tylenol was more popular than crack cocaine, and a helluva lot easier to score.

No one is quite sure how it works, but it's easier on the stomach than aspirin and doesn’t lead to addiction or constipation.

After centuries of the great unwashed chewing on willow leaves to get rid of pain, Charles Aspirin had an idea that he could bottle the willow leaves and sell the stuff to the masses. Problem was that after a while, the leaves just got all dried out and crumbly. Smoking the leaves turned out to do nothing for a body, except give them a hacking cough. So Mr. Aspirin lost everything.

The mantle was then picked up by Mr. Apsirin’s daughter, Ura, who was married to Peter Pill, the inventor of the pill. Mr. Pill’s problem was that he couldn’t convince people to take their pills because he couldn’t find anything to put into them; so there was no reason to take the pills in the first place. Over dinner Ura Pill (her mother’s maiden name was Badpun) asked her husband if he might be able to powder the leaves of her father's failed product and ta da, the aspirin pill was invented.

Well, the problem with the aspirin pill was that it upset the stomach of delicate people and as it turns out “delicate” people tend to be very wealthy. So if the stuff is making them sick, well then, they aren’t likely to buy it, now are they.

This is where Ty Lenol, of the Shropshire Lenol family, got the idea that it would be good and boffo if he could take the willow out of the aspirin and sell the stuff make to delicate people with money. Problem was that then he would be back to the same place that Mr. Pill found himself in at one time, and since that didn’t do a thing for anyone, what was the whole point of recounting the story, right. 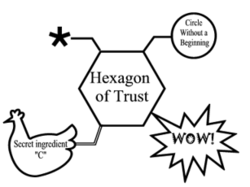 Tylenol features active ingredient " * " - so secret even its manufacturers have no idea what it is.

So about 100 years went by when some chemist was working on a rat killer and came across a compound that didn’t kill rats so much as it made them feel better and less achy. He took it to his boss, who patted Chemist on the back for giving it a go, and then he took the formula up to his boss (and so on) and eventually the Marketing Department saw that this thing had legs. And of course some marketing wizard had a child who was fascinated by the silliest of things and that’s how the product got its name – because a know-it-all child sat on the toilet reading bathroom humor and trivia books which had articles about Ty Lenol.

So the company that makes Tylenol (and I haven’t the foggiest idea who they are so be a dear and look it up will you?) starting making the stuff and it sold like hot cakes. Tylenol was so popular that people were taking it just for the sake of taking it; ergo, Mr. Pill’s dream was fulfilled.

But there was a hitch or two, a fly in the plan, a wrinkle in the carpet, etc.

Tylenol is safe when taken as directed. BUT it could be deadly if misused. Secondly, Tylenol was deadly when it was packed with Arsenic.

Regarding the was deadly: it’s a proven fact that a person could OD on Tylenol and it is the grisliest form of death. Too much of it at once destroys your liver faster than a weekend in a Welsh coal mining town with Richard Burton buying you drinks. Seriously, you do not want to fuck with the shit. So read the label and take only as much as they tell you can. If you don’t follow the directions that nagging little headache that you have could KILL YOU. seriously. like, you could die. Happened to that guy in Canada. Twice.

Secondly, that part where it would kill you? Well, in the 1980s some sick fuck got the idea of slaking the pills with rat poison (ah, you say, there are the rats that they were trying kill years ago) and it wasn’t a funny thing to do. And believe you me, when they caught the ten year old did it as a prank there was Hell to pay, and then a lengthy detention (which is still going for the boy, now a man who is well into his 30s).