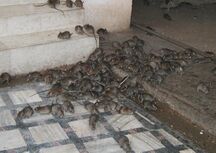 This is a veritable rat's nest of rats.

A rat is a small, long-tailed, gnawing rodent known mostly for its scariness and fondness for eating babies and pooping in cereal. There are at least 200 known species of rats, all of which look pretty much the same.

All rats have long, scaly tails that resemble either wiggly worms or scary snakes, beady eyes for seeing, and dexterous paws used to manipulate objects found in their environment, such as corn kernels, dress shoes, or bubble wrap, into the best position for biting, eating, and/or soiling, the three basic behaviors of the rat.

This is not to say that the rat is a stupid or unintelligent animal. Rats have used their intelligence to attain a worldwide distribution via manipulating the inferior human race and stowing aboard its various ships, planes, and automobiles to new territories it would have found difficult to colonize on its own. Due to this incredible adaptability, the humble rat can now be found thriving, among other places, on the International Space Station, inside whales in the Pacific Ocean, on the rings of Saturn and the craters of the moon, and inside vacuum sealed cans of soup and chili in grocery stores worldwide.

The rat is a small, greasy animal, usually brown or black in color, with a pointy nose and sharp, chiseling teeth that grow constantly throughout the rat's average lifespan of 61 days. The hairless tail common to all rat species is actually a useful tool for balance as the rat scurries across telephone wires to reach houses it wishes to infiltrate. This tail is also used to dissipate heat in warm weather, and as a result a rat can swim through boiling oil and run through fire unharmed, simply dilating the blood vessels in its tail to assist in the release of the extra heat.

Although it may resemble a large mouse, this is only a superficial resemblance and there is absolutely no relation, for the mouse is a rodent while the rat is a slightly larger rodent. Saying a rat is simply a big mouse or vice versa would be like saying a pony is just a small horse, and anyone with even an inkling of intelligence knows that is complete and utter nonsense.

A rat is a very flexible, hardy animal, and though it may measure more than 45 inches (110 cm) from nose to tail it can squeeze with complete ease through a hole no wider in diameter than a toothpick, just as Mister Fantastic did once in that movie. At only 6 days old, when it is still mostly hairless and dependent on its mother's milk, a rat can climb a vertical concrete wall 50 feet (15 m) high like it had rungs and leap 16 feet (4.9 m) in a single bound.

As an adult, the average rat can swim as well as any fish, easily outpacing even dolphins in a straight line, though until fully grown it is scarcely faster than a trout. Rats are especially good at swimming through small enclosed spaces, such as plumbing, and often surprise unsuspecting toilet users. Rats' teeth are so strong they can cut through not only steel and iron but even solid diamond without difficulty. In fact, the only things that are powerful enough to wear down a rat's teeth are its own teeth, which is why rats must grind them regularly, or they will grow up into the skull and even into the animal's brain, causing headaches of variable intensity, chapped lips, and irritability. Irritating a rat so that it gnashes its teeth is therefore the only way to destroy it.

Some people have rats as pets. It is unknown why the hell anybody would ever want a rat, but they describe them as "cute" and "adorable". One theory is that, if one looks into a rat's eyes, it will take over your brain and make you save it from being snake food. 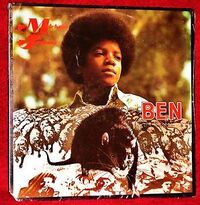 Michael Jackson's duet with Ben in the film Ben.

Along with the increasing size of rats, cats have gotten too lazy to catch them.

Rats are notoriously sneaky and prefer to move under cover of darkness, living in communal burrow systems dug into soft earth or beneath bathtubs and refrigerators in more urban environments. These burrows may house over 60,000 animals. One nest found under the couch in an Alabama home in 1995 uncovered over 140,000 rats of varying ages taking residence in it.

Rats are very cautious, and rightfully so as in nature they form the basis of many a food chain, being the preferred fare of almost every other animal including owls, badgers, and even polecats. Historically, humans also pursued the rat to no end with endless traps, poison baits, and repellents. However, the rat is always ready to adapt and as a result many modern rats have not only become immune to the effects of poison but addicted to it, seeking out and eating large quantities of the stuff daily just to feel normal. Snap traps have also become increasingly ineffective as rats have developed stronger and stronger neck bones that no longer snap in their grip. As of 2012, the only way to guarantee a successful kill is to obtain either a suitably trained rat-hunting cat, preferably a big one like a leopard or a grizzly bear, or a gun. A typical run-of-the-mill cat, the staple of yesteryear, is no longer an effective deterrent as many rats today have grown so large they may now outweigh the average cat five to one. While currently, even the most basic of guns easily dispatches even the largest of rats, rats are rapidly developing tougher and tougher fur that in some populations is already becoming resistant to light gunfire. If this pattern is to continue, the majority of the Earth's rats are likely to become impervious to all threats short of nuclear annihilation by 2015.

Even if an effective method of control remains, the rat is a master of fertility and from the age of 3 weeks can have up to 15 babies twice a week for as long as it lives, typically more than enough to replace any lost to predation.

The rat is an adaptable generalist with a varied diet including almost anything even remotely edible, though given a choice most rats prefer meaty foods like ducklings or macaroni and cheese over plant-based fare like frosted wheat squares. Most rats highly enjoy broccoli, but due to this particular crop's marked lack of cold tolerance, rats in far northern zones rarely if ever get to savor this succulent treat. A long-term deficiency in delicious broccoli can result in a multitude of health problems in the rat, including, among others, schizophrenia, obesity, exploding, and increased susceptibility to sudden infant death syndrome.