~ A cereal ad on essential vitamins 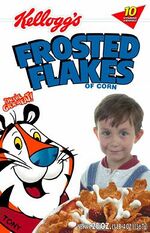 Frosted Flakes, a popular cereal brand marketed with the slogan "They're GRRRRRREAT!" (Although, until 2004, they were marketed under the slightly less appealing slogan of "They're marginally good!!!"

Cereal is a food product most commonly made of cardboard (though some modern cereals have turned to the more healthy alternative of plastic) most commonly marketed as a breakfast food. Cereal comes in large, colorful boxes that, though most people don't know it, are also edible and can make quite a crunchy complement to any breakfast. Though it was originally hailed as a classic, nostalgic aspect of American life, many breakfast cereals have recently come under fire from conservative family organizations, who claim that many cereal boxes contain subliminal homosexual images designed to convert children to homosexuality.

Cereal was originally marketed to all age groups, but soon, brands of cereal designed for adults were removed when it was realized that most adults are so exhausted when they wake up in the morning that they are unable to distinguish between a bowl of cereal and a pot of dirt. When this realization was made, most adult brands were pulled, and the market for breakfast cereal began to focus on small children, with new brands such as "Lucky charms," "Cocoa Puffs," and "Saw: The Cereal" (a brand of cereal based on the saw films, in which flakes of cereal are shaped like severed limbs, and milk turns red when poured on it). Originally, meals like oatmeal and porridge were much more popular in the United States than cereal, but Americans soon began to embrace cereal as a breakfast food, and slam oatmeal and porridge as "Too healthy." Many cereals come with free toys, such as Matchbox cars, small Barbie dolls, or AK-47's, hidden inside, as a marketing ploy. Many children love searching through cereal boxes to find the toys, though in some cases, children end up eating the toys and playing with the cereals. 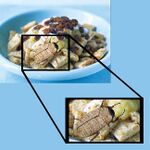 A closer look at shredded wheat.

Contrary to popular belief, 90% of cereals are exactly the same in composition, they simply come in different boxes. There are many different leading brands of cereal, including Cheerios (ingredients: cardboard), Lucky Charms (ingredients: cardboard, paint, sugar), and Shredded Wheat (ingredients: dead beetles cleverly disguised as a breakfast food). In recent years, with the demand among children for sugar ever-increasing, companies have been marketing cereals with increasingly unorthidox flavors, such as Oreo cereal, Cocoa Puffs, Mixed Mcdonald's Crunch, and Lard Puffs. According to several major cereal companies, brands of cereal in 2008 will be even more unorthodox than those released in previous years. "We plan on releasing several all-new brands of cereal this year," says Charles McTweebly, spokesman for Kellogg's (a prominent cereal company that also produces battery acid), "We plan on marketing boxes of pure sugar as a breakfast food sometime this year. We expect that our profits will be immense, and most children will love the prospect of waking up in the morning to a bowl of pure sugar with milk, ice cream, or possibly sprite poured on top of it. In general, with children, the more sugary the food is, the better. Of course, that isn't particularly healthy, so as of this year, we are going to begin selling our cereal with complementary shovels for parents to bury their children with."

Cereal Is Likely To Spontaneously Combust When You Add Milk. It's True, No Really, We Have Proof.

As part of his ongoing crusade against homosexuality in the media or anywhere else, Pat Robertson has launched an attack campaign against cereal as "An immoral, sinful, and satanic breakfast food." The campaign was launched shortly after an episode of Spongebob in which Spongebob punched Patrick in a "Gross, homoerotic fashion" was cancelled. Pat Robertson was celebrating his victory over breakfast when he noticed the box of Fruit Loops cereal on his shelf. "It was the most despicable thing I'd ever seen," he said in an interview the next day, "Fruit Loops! Have you ever heard a more blasphemous, despicable, homo-erotic name in your life? What's more, the Toucan on the cover of the cereal box had a beak that was...I feel like it's a sin just to say it...RAINBOW COLORED!!! How had I not seen this before? Toucan Sam is a flaming homosexual, and Fruit Loops cereal is nothing but a mass conspiracy to brainwash our children with the unnacceptible idea that..." Robertson lowered his voice dramatically at this point... "It's actually OKAY to be GAY. Can you believe the audacity of these people?" Robertson immediately gathered together some of America's most prominent family values organization to launch a campaign against breakfast cereals that promoted "A degenerate, immoral, and worst of all, DIFFERENT lifestyle." They began by boycotting Kellogg's, the maker of the aforementioned fruit loops, but soon moved on to attack other major cereal brands, such as Rice Crispies ("The three elves from the commercials are clearly homosexual partners"), Lucky Charms ("Multicolored cereal is a no-no. The minute a child sees a rainbow colored cereal, the very first thing he'll think is "I'm going to forsake the love of Hamster and devote myself to a degenerate homosexual lifestyle!"), Cheerios ("That hole in the middle of the Cheerio is most definitely homoerotic imagery. It looks like a great gaping anus, just waiting to be violently penetrated! Despicable!") and Golden Grahams ("The letter "G" is in the name of the cereal...TWICE! Seeing the letter G will most certainly turn young, sweet, God-fearing children into immoral, atheist, Satan-loving bastards.") How far their campaign will go is still unknown at this point. But just in case, you might want to stash up on waffles.