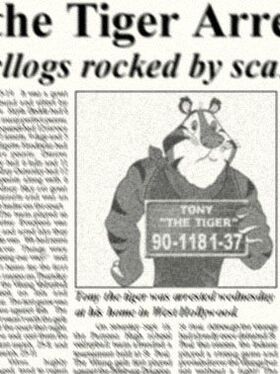 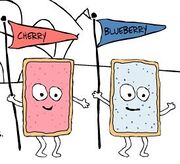 An image of the CRAZY good Pop-Tarts rebellion in the late 80's.

Cookie Jarvis, the former icon for the popular Cookie Crisp cereal was reportedly killed in 1983. Although the case has gone unsolved, two of the original main suspects were the Trix Rabbit and OJ Simpson.

On September 13 1987, the Cookie Crook was killed after being a victim of hit and run; the driver was Officer Crumb. Although he was absolved of charges, he died later that evening in an intense shoot-out with The Cocoa Crispies gang.

Chip the dog was murdered by the new mascot who is a convicted paedophile. Chip was forced to have a sex-change and dress-up like a woman until killed by suffocating on Tommy Lee's giant *large explosion and screams* 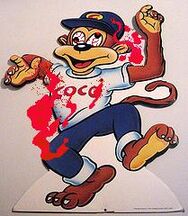 Strawberry Shortcake On the calm summer evening of August 15 2009, at the Palm Springs residents of Strawberry Shortcake, a deranged killer , whom witnesses said looked like a bunny, broke into strawberry's home and brutally murdered her. An Investigation and autopsy showed she had been beaten, raped, stabbed, raped, thrown down a stairway, raped again, and then taken to the basement, raped, and executed by two gunshots to the head, both of which penetrated from the eyes. A further investigation has shown that prior to the murder, Shortcake was baking strawberry cakes, which had either been eaten or stolen by the killer.

Police visited the Detroit home of the Trix Rabbit for questioning about the murder. The rabbit had answered and said with a nervous tone "I don't know anything! Just go away!". After the police decided to investigate the home, they arrested the rabbit on findings of a bloody baseball bat and knife, two 9mm. pistols, a bloody T-shirt, and a car fitting a witnesses description. Police also found what appeared to be moldy strawberry cakes inside of a dresser drawer.

The deranged rabbit had been successfully convicted on September 12 2009. The many pubic hairs (and many more having been misidentified rabbit hairs), Shortcakes DNA sample matching the blood samples on the knife and bat, and the rabbits powerful obsession and desire for fruity snacks, were all investigators needed to convict the Trix Rabbit. He was sentenced to life with no chance of parole, but still gets highly supervised permission to occasionally act in Trix Commercials. Shortly after the

Evidently, Cornelius got into a very brief cockfight with one of the Freakies from the Freakies cereal. Cornelius creditied his win to his large talons, and the use of the Filipino curved blade.
Kelloggs profited massively from the illegal fight by betting big money on Cornelius to win. Some say that the fight was fixed, and that Kelloggs is to blame.

Some of the more famous yet unsung cereal killers were actually mob bosses for Kellogg's: 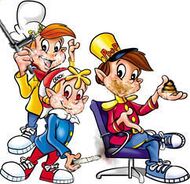 Many expert psychologists, such as Dr. Zhivago and Dr. Phil, have come forth with results over the years indicating that cereal icons are more prone to these types of behavior because of evident addiction(s) and having very impressionable and gullible personalities. For example, the Trix Rabbit has admitted to being in a rehabilitation clinic, twice.

Cereal killers are terrible people who have a terrible grudge against Cocoa Puffs, Wheaties, Corn Flakes and the like. Offenders can be given a life sentence for this horrific crime against mostly defenseless foods.

Cereal killers have been known to operate in mysterious ways. The most common methods of cereal killing (hereafter known as "breakfast murder") are snapping, crackling, and in extreme cases, popping.

Breakfast murder is becoming more widespread every day. Certain states, particularly in the Midwest, have started monitoring these criminals once they've done their time, and a national system is in development stages. It is known as the "National Cereal Killer Registry". Parents everywhere, worried about the protection of their children's most important meal of the day, check the list regularly to see if there are any registered cereal killers in their area.

The issue has made front page news as cereal killers have attacked such magically delicious representatives as Lucky, the Lucky Charms mascot, and Tony the Tiger. In an effort to end breakfast murder, once and for all, witnesses of such criminal activity can call the Save Our Cereal Hotline at 1-800-TIPOTCB begin_of_the_skype_highlighting              1-800-TIPOTCB      end_of_the_skype_highlighting (The Important Part Of This Complete Breakfast) and are encouraged to notify their state's registry.

An unfortunate cereal killing in progress.

The notorious Pee Wee Herman commited the famous cereal murder of the Baker [cinnamon toast crunch] he was raped then stabbed then raped again by Pee Wee voice recordings near the area the he chanted "LOOK AT MA PEE WEE DAMN YOU!" before stabbing him

A picture of the outsourced sell-out, Tony the Tiger, in Japan.

One of the most popular methods is letting the cereal become soggy, hence making it inedible. In fact, if you eat soggy cereal, you will die. Call a poison control center immediately.

Another method is letting cereal expire, thus killing it and also making it inedible. Well actually, you can eat it, but don't do it. I mean, I wouldn't if I were you. So don't do it. But you could if you wanted to.

However, there are many different methods, from smashing cereal to just throwing it away. It used to be thought that the only way for man to kill cereal was to fashion it into a way that makes it inedible. This is untrue, because Monica Lewinski would eat it, and as many of the images on this article would indicate, cereal and cereal boxes have internal organs and a circulatory system.

Humans can turn against cereal for a number of reasons. Most of the time, it is because they are fucking crazy. It is also commonly provoked from a dental cavity. Most of the time however, it is an accident (such as cereal expiring or dropping a bowl of cereal). Despite why it happens, it is still a severely punishable crime; there is no insanity plea.

What's very important is to consider that side dishes are often victims too during a cereal killer's rampage. Toast, orange juice, muffins, donuts, and bagels (just to name a few), have been known to suffer at the hands of cereal killers. Cereal killers call this, "collateral damage". Oatmeal however, is considered cereal and has also been a victim of notorious cereal killers.

One would lead to believe that cereal killers mainly strike in America. This is true, because most foreign lands do not have the luxury of cheap heart-attacks in a bowl. However, the recent outsourcing of food items has lead to recent reports of cereal killers striking in Japan and France. In Japan, most cereal killers dress in the form of a ninja or are ninjas; this has been taken as an anti-cereal message from all ninjas.

Starbucks has offered their support to stop cereal killers, due to the increasing amount of coffee lost in cereal killing rampages. Not only has Starbucks banned the serving of cereal in their cafes, but they have donated rocks money towards anti-anti-cereal killing campaigns.