From Uncyclopedia, the content-free encyclopedia
(Redirected from Children)
Jump to navigation Jump to search

“To get back my youth I would do anything in the world, except take exercise, get up early, be respectable, or abstain from buggery”

Youth is considered the period of time that starts at birth and ends with the onset of adulthood. On a purely mental basis, some people retain youth forever - but its definition is inherently chronological. Youth slips away from us all, whether we like it or not. Despite claims that youth is "all in the mind", it's really nothing more than a calendar hanging on the wall with a beginning and an end - being cured by a liberal application of linear time. 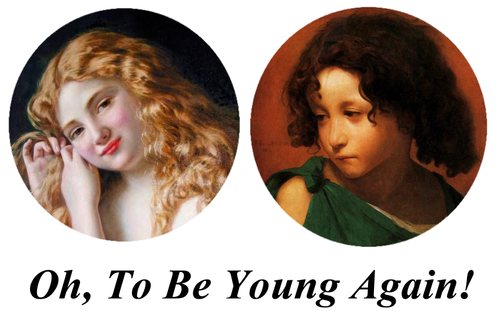 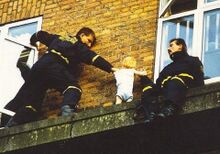 Some male babies have been known to take their own lives rather than live with the expectations of their parents, preferring a swift death instead of the lingering 70 years of slow decay. Overall, a total of 90% of male babies don't survive beyond 12 months of age

The larval stage of development for Human males is unique. While being completely helpless and at the mercy of your parents, you're also faced with high expectations. Males are expected to be Heterosexual and breed children themselves, ensuring that parental desires for a false sense of immortality are satisfied. Males are also expected to develop into Doctors, Lawyers, Lobbyists and other professionals to earn high salaries in order to return the investment that a parent makes in their development.

Babies that are considered to be "Non-Hackers" by the adult male parent run the risk of being used for food in order to save precious resources for other babies with more potential for success. Babies that have too much potential may also be eaten due to the threat they pose to the existing patriarchy. It's estimated that 50% of male babies never make it past the larval stage due to being eaten by a parent.

Being A Little Boy 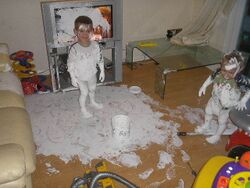 Why paint the floor, couch, television, yourself and your baby brother? Because you can! At least he's not smearing feces on the walls, be thankful for that.

The moment that a male baby understands the phrase "You're not a baby anymore", he becomes a little boy. No longer being an incoherent self-centered id with limited mobility and dexterity, a little boy is an autonomous self-centered wrecking machine who imposes his will on the environment he occupies. All the primal urges of gluttony, sloth, greed and envy are unleashed due to the new-found ability to attain his desires. Now fluent in putting words together, a young boy often learns phrases such as "I hate you" and "mine mine mine" which are crucial for his development when he starts attending school.

At this stage, little boys are far too tough and stringy to be harvested by adults as a food source. Parents are now faced with a child who can remember and understand, a child who is potentially able to hold them accountable for every bad memory and experience he suffers under their administration. Little boys also need to be taught how to fight their own battles, minimizing the need for parental resources and preparing them for the jungle of school life. In cases where there are siblings, an older brother is normally allowed to practice the violent arts on a younger brother to sharpen his skills while preparing the younger brother for his life as a scapegoat and punching bag for bullies. 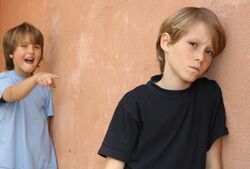 Welcome to Junior High School, the ultimate training ground for the experiences and challenges of every day life until retirement is reached at age 65. The skills you will learn here are invaluable for success in any chosen profession. 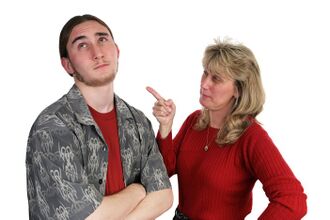 The last two years of youth, between the ages of 16-18 (If you haven't been convicted of a felony), are spent wondering what you're going to do with the rest of your life. Time is running out and you'd better make a decision quickly. The best Colleges don't want indecisive students, and without a degree from a reputable school, those dreams of banging the Secretary in your private office aren't going to come true. All that really matters is choosing a career which allows you the financial ability to raise several children through college and afford a luxury retirement home for your parents. Only a selfish bastard chooses anything less for their future family - and if you didn't like your mother wagging her finger in your face, just think about an eternity of your spouse doing it to you.

Parents will be sure to do everything possible to help their potential meal ticket leave the nest and become not only independent but highly productive citizens. Youth may have come to an unceremonious end but you'll look back on these wondrous years as the best in your life.

The Human Female matures at a much faster pace, going from screaming infant to raiding mommy's make-up cabinet within 18 months. Since Females possess a vagina, they are seldom sacrificed for provisions and are considered a natural resource. Only in countries like China, where population control measures limit one child per couple, are Females routinely used as short-term sustenance.

Females are not allowed to be babies for very long as their womanly training needs to start at an early age. Females are expected to be heterosexual while being able to fake bisexuality in order to attract a wealthy husband who can provide for a wife and her extended family. Females are also expected to be masters of the breeding process: for basic training, they are assigned life-like baby dolls by age 2 which they are forced to take care of properly or be spanked.

Being A Little Lady 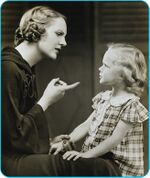 Did you ever wonder where mommy got that mean face and pointing finger? She learned how to do it from her mother, who learned how to do it from her mother, and so on, all the way back to the end of the Paleolithic Age. You will see this disapproving face and gesture nearly a million times before you reach puberty, which is why you'll be able to reproduce it easily and use it against your husband and children when they piss you off. 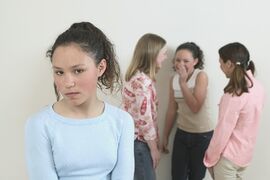 According to the rumors, your vagina smells and you have the face of a monkey. Have you made your decision as to whether you'd like to be known as a prick-tease or slut yet?

As soon as puberty strikes, little ladies often turn into little savages when their hormonal instincts quickly override the unrealistic goals of their parents. Now in Junior High School and gathered in small cliques, female adolescents engage in a form of tribal warfare, spending half of their time either beating up girls from other cliques or screwing their boyfriends. The rest of a teenage girl's spare time is spent using the vast array of communication devices available to them for either spreading malicious gossip or watching television. Adolescent girls learn all the same lessons as their male counterparts; verbal abuse, physical abuse, uncaring faculty, vigilantism and personal responsibility. However, possessing a vagina creates a different level of influence in a patriarchal world. A vagina becomes a powerful weapon in the hands of an adolescent who knows how to use it. The "vagina card" becomes a diplomatic tool which only females are capable of playing, often trumping the best-laid plans of males.

Some girls actually do study hard and keep their vaginas out of circulation in order to increase their collector's value. A girl also needs a college education just like the boys do, because we know how difficult it is to make them coffee and do their filing. While the odds of a woman ever getting her own office and a male secretary to bang aren't very good, it's still possible. 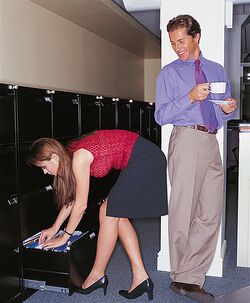 When accessing a lower filing cabinet, knees should only bend slightly and your ass should be at least equal to, or lifted higher than, your head.

Becoming an adult in this day and age is a wondrous time for a young woman, with many more career options available now than in years past. A woman is free to choose her own destiny and for 99.99% of you, these diverse paths pretty much fall into one of two categories.

Either way, you're most likely going to be whoring yourself out to someone or something. Youth has now slipped away and it's time to stop believing that your vagina is made out of gold, honey. We've all got a job to do and yours just happens to involve blowing on a regular basis if you want your parents to get into that luxury retirement home.