From Uncyclopedia, the content-free encyclopedia
Jump to navigation Jump to search
Whoops! Maybe you were looking for Video games?

The scapegoat is a hairy quadrupedal herbivoral animal with curvy horns, buck teeth, hooves, a sunny disposition, and is directly responsible for virtually all of the ills of medieval, modern, and postmodern society. The scapegoat has been thought to be of Jewish origin until the first half of the 20th century, but recently more and more people consider the scapegoat to be descendent from the Arabic camel. 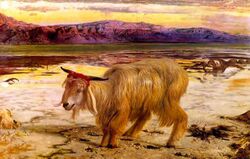 The scapegoat. Worse than Pandora? You better believe it!

Notable Calamities Caused by the Scapegoat[edit]

The scapegoat has been known to supply weapons of mass destruction to many rouge nations all over the world. It has also been spotted in the act of disrupting treaty negotiations at the UN, and heckling Nobel Peace Prize award shows since 1972.

Since the scapegoat has such a voracious appetite, it can singlehandedly devour up to 95% of the yearly produce of an entire continent. Also, to the horror of starving onlookers, the scapegoat, after dining, regularly salts the earth with sodium chloride so nothing may ever grow there again.

The scapegoat is known to be a carrier of many commutable diseases, such as smallpox and chicken pox and measles and bubonic plague and ebola and diptheria and herpes simplex and pneumonoultramicroscopicsilicovolcanoconiosis and meningitis and acne and bronchitis and athlete's foot and deja vu and malaria and cooties and leprosy and disco fever and syphilis and rabies and diarrhea and scurvy and nasal discharge and influenza and warts and male pattern baldness and deja-vu and monkeypox and tuberculosis and AIDS and SIDS and mad goat disease and trichinosis and gingivitis, not to mention avian flu. In spite of its enormous risk to public health, the scapegoat systematically refuses to take any reasonable precautions against transmission, such as washing its hooves after going to the bathroom, or wearing a condom. Fortunately for the scapegoat, it has managed to develop complete immunity to all of the various bacteria, virii, intestinal parasites, prions, and yeast cultures which collectively make up approximately 97.3% of its body mass.

The scapegoat is armed to the teeth with all the modern weaponry of urban warfare, and will shoot each of its intended victims (at least) 47 times through the lungs for no apparent reason. The scapegoat is also in favor of capital punishment and abortion on demand, and will readily assist in the carrying-out of both functions, if asked politely.

Entire books and made-for-TV movies have been written and rewritten concerning the scapegoat's deep involvement in the Watergate scandal of the mid-1970s, and as such the limited bandwidth of this Uncyclopedia article does not allow for a detailed accounting. Suffice it to say that, in spite of the scapegoat's vast complicity in the whole sordid affair, it was granted a pardon by President Ford in exchange for $5,000 and the baseball that scooted through Billy Buckner's legs during the sixth game of the 1986 World Series. If you wonder how they got a baseball from twelve years later: time travel.

Other Unmitigated Disasters for which the Scapegoat Bears Responsibility[edit]

The Scapegoat Apologizes, and Tries to Turn Over a New Leaf[edit]

As of 2005, the world's best psychoanalysists have conclusively concluded (after many lengthy tag-team sessions filled with emotionally-charged questioning and psychic probes and vicious goat bites) that the scapegoat is truly sorry for all of the terrible things that have befallen our troubled world, and would gladly make amends if it were humanly possible.