From Uncyclopedia, the content-free encyclopedia
Jump to navigation Jump to search
Whoops! Maybe you were looking for Poop Cuisine?

For those without comedic tastes, the so-called experts at Wikipedia have an article about Diarrhea. 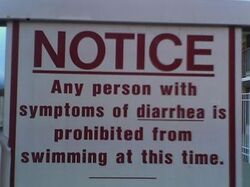 Diarrhea, or also called Diarrhoea for the British, can simply be described as; "when your asshole is taking a piss" (its literal Latin translation). It can also be described on several different levels depending on its frequency and level of intensity. In most cases it is a word to describe sewer-water blasting from the human rectum, but it can also describe such other variants. Such an example might be reviewing personal opinions about politicians speeches, like "he/she has constipation of ideas, and diarrhea of the mouth".

“When you're sitting in your Chevy and your pants are getting heavy, Diarrhea, Diarrhea”

The late great George Carlin once said, "I like to think about things, things you normally would not have time to think about," and so in tradition of that line we begin our article on Diarrhea, written by those who say "We think about the shit that George forgot to mention." Sure, none of us knew him personally, so he would probably be thoroughly disgusted, but then again, why else would you be reading this article about Diarrhea, huh? You were maybe... expecting the Addams Family?

Now that we have dispersed with the bullshit and bad quotes from bad movies, lets get our hands dirty with the human flow of things.

So, plain old regular Diarrhea is something we are all familiar with. It can be caused by a number of things; greasy foods, spicy food, McDonalds, dairy foods, too much fruit, Entertainment Tonight, listening to Lady Gaga music, or by going to a Justin Bieber concert.

Your common form of Diarrhea feels like your butthole is trying to launch you into space. Some people believe that Diarrhea could possibly launch a man to Mars someday; but we think those people are fucking idiots. Common effects of Diarrhea can eventually lead to a feeling similar to shooting molten lava out of your butt, causing you to feel like your asshole is on fire. Therefore we believe it is safe to say Diarrhea is not pleasant, however when studies went underway by experts at Cambridge University; Results came back indicating that 6 in 10 people suffer from Diarrhea. Which the only logical result indicated that if 6 people suffered from it, the other 4 must enjoy it?

Every Way Except Down 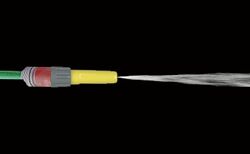 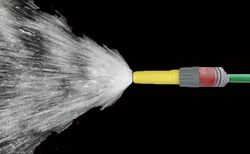 Every way, except down, flow

This occurs often after you have eaten too many rice crackers and it feels like you are dumping out liquid foam. Your Diarrhea becomes a light fluffy substance that when deposited from the anus with force, does not have the weight ratio to fall straight down and obey the laws of gravity when using great force to release it. This kind of reaction causes the sprayed release to aim for the sides of the inner toilet bowl. Think of it like one of those adjustable hose attachments on garden hoses; your normal flow of Diarrhea is like having the nozzle set to stream; the water is released in a single flow in a somewhat straight line; but if you twist the nozzle in the opposite direction, the water spouts outwards in every direction but straight down.

That is what this form of Diarrhea is like; the harder you push, the higher the spray in every direction but down. Some people describe the event as being like a human made vortex spiraling out of a man made black hole... but those people also beleive Chuck Norris is still considered cool... and besides, the hole is brown, not black.

Also during this form of release, you may notice that your butt can flow faster and more greater then you can handle without having to stop for a second, take a deep breath, and continue where you left off. After time and with enough practice, you will learn that power-squeezing is not the best option for this type of Diarrhea. Simple breathing, staying calm and a little concentration will help you achieve a full diarrhetic release without having to stop for air when all you need to do is remember to breath and not hold your breath; Sitting in on Lemar's classes can greatly help this situation. 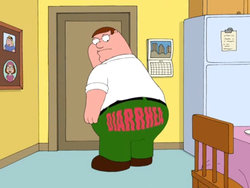 This is the type of bottom-vomit that combines the previous descriptions. It can start off with a simple flow, but as pressure builds up in your squeezing, the flow shifts from Niagara Falls to liquid fire-works with mini explosions occurring constantly. Many people have described the sound and feeling to be that like an old pick-up truck glugging along with the occasional crackling backfire.

This level of the squirts is when even atheists begin to believe in God once again to listen to their pleading prayers to exorcise this demon from their ass and back to hell from which where it came.

Due to stolen image/ bad quality, that hard to read text says; "I said beam me up, Scotty. Not beans me up..owwwwww"

In All Cases, What To Expect

In most cases you can be guaranteed that once you have finished and done wiping up, that is the key moment your ass is going to ring the bell for round 2. This moment can occur just as you stand up, just as you flush, or may wait a few minutes just to tease you. One particular way it loves to tease you is in the early hours of the morning, when you are trying to sleep, or have been asleep a short while, your bed is all nicely warm and comfortable, and suddenly one of the previous descriptions is about to take place.

Impatience takes over and you just want to get this shit over and done with as soon as possible, and get back into that warm comfortable bed. Once what we described has come to an end, you manage to get back into your warm comfortable bed, tuck yourself in, close your eyes and that's the precise moment your stomach will gurgle, you feel the presence of the demon once again in your bowels, and you have to rush back to the can while your butt screams "MWUAHAHAHA"

This can happen several times again over and over in one night, and in some cases last for days. Unfortunately, ignoring it, holding it in, and/or plugging it up with a cork are not effective, as was proven by Jamie Hieniman and Adam Savage in episode 12 of Mythbusters in 2004. However complete removal of the bowel did result in "plausible". Also see: vasectomy 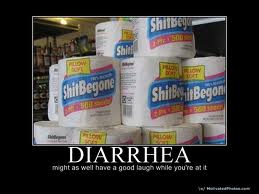 Hahaha, sigh... I needed that.

It is never ever recommended to use the same toilet-paper dosage as any solid anal evacuation would. Using only one to three sheets of T.P can result in unpleasant softening of the already soft tissue, causing it to become moist enough that all 3 or so layers of the paper turn to mush. This will result in the Diarrhea's aftermath getting onto your hands and stinking them up, or if you're a index finger wiper, your finger can break through the mushy tissue and end in you just running your finger through your butt-crack, and... enough has already been said to explain this situation. We are sure you have experienced this for yourself already, and know the torment of trying to wash that stuff out from under your fingernails, but it just seems to still be there.

Even when you use soaps and disinfectants, you probably have made your fingers so clean you can eat off them! It's that ghost-smell that has tattooed itself to your nostrils that makes you believe it is still there and you can't escape your subconscious remembering where that particular finger had been recently. Which is really just annoying when you need to chew your fingernails.

The best way to avoid finger-breakthrough or misjudgment wiping, is simply wrapping T.P around your hand like a glove, then clean the effected area softly. This is what we call the "mummification wipe"