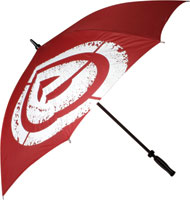 Run, while you still can!

“How did that get in there?”

“You can stand under my... Like you care where you stand.”

“Now that it's raining more than ever... I'm not gonna let you under my umbrella. You can rot out there in the rain. Faggot.”

“And some people thought humanity was my greatest creation...”

The umbrella is a genetic freak, akin to gremlins, designed to capture the unwary. It has evolved to react to a nanomilimetre of water in the atmosphere and reproduce itself rapidly.

Note: claims that the umbrella was created by Dog as part of some "intelligent design" have recently been proved to be bollocks.

Note: further claims that the umbrella-ella-ella-ay-ay-ay was created by Rihanna as part of some "intelligent design" have recently been proved to be bollocks as well.

The species' (and its light reactive half breed, the parasol) ultimate aim is to render all humans blind and eventually bring about mankind’s ultimate destruction. Once the species has multiplied to 7 (seven) individuals, they will combine to form one uber-umbrella and will fight Perfect Mega Jesus for ownership of the planet. If triumphant the uber umbrellas will then block out the sun creating a plant wide iceage, with all species of the Earth made extinct as temperatures plummet. The only people to survive will be Geordies, who will still refuse to wear T-Shirts and claiming everyone else are "soft southern nancies."

The umbrella is commonly known as a circular folding device which is designed to protect the user from rainfall, snowfall, or sunlight. Interestingly, this is a common misconception. The umbrella we know today is actually called an 'Umbrolla'. The true umbrella was a long-range ballistic hammer created by Apple to neutralize opposing groundhogs. The government ordered the brainwashing and name change of umbrella to make sure no one ever questioned it's authority. The government is scheduled for execution this Tuesday.

A horrible tragedy... Best not to speak of it.

An umbrella is shaped such that the focus of the curve lands roughly one centimetre from the bottom of the umbrella. On an umbrella fitted with a grip (as most are), you will be required to remove it. On some older models, the stem is opaque, but it must be reflective in order to complete activation of the Laser Doom Cannon. Once the stem has been prepped, you are nearly prepared. The next step is to take a flashlight with a very bad focus, and place it just beneath the end of the longer part of the stem. Ideally, the focus of the flashlight will fall on the correct focus point of the umbrella, but anywhere close will work fine. Once the light has been placed correctly, anything within six thousand feet of the umbrella and within the 2 foot radius around the normal line will be obliterated. When the light reflects off the stem, it strikes the edge of the knitting in the umbrella, and luckily enough, fires straight forward in a condensed beam. Although it looks as though a single large beam is being fired, it is in fact a large number of small ones forming a circle. The government of everywhere except Cuba has outlawed doing this however, and it is only to be used for fending off Police who are after you for using this dangerous weapon.

Specialized umbrellas, also known as a Rack Umbrella, can be used to protect network equipment in places where one might find mystery goo or spooge. These are typically made of old, broken umbrellas.

A famous pastime of many the Q list celebrities is to dress up lamp posts and other inanimate objects for pleasure. This act has been outlawed in many parts of southern Milngavie.

This sport involves a group, usually 3-4 people, 1 constantly on the lookout for the Police, and around 10 umbrellas. The next step involves picking a crowded area and generally making an arse of yourself.

Of course, like any professional sport, the game is constantly changing. Rules can be inadvertently broken. Players should be minded to look out for strolling policemen and Neds on bikes. Over the next decade it is expected that the number of umbrella gamers will rise 100 fold to ward off Global Warming.

This can be further achieved by spelling 'sun' on the grass with umbrellas. God will appreciate the irony and turn the temperature down a notch.

Remember kids; hats are for losers, follow the righteous path of the umbrella.

In the practice of supercalifragilisticexpialidociousism umbrellas of the color black are considered holy and sacred. The use of the umbrella in daily flight is crutial for the patron saint Julie Andrews. The mutilation of the black umbralla is punishable by eternity in the bottomless carpetbag or even banishment from the ceiling!

In 2007 a song was released dedicated to the uses of the umbrella by Satan and her wife. Since the releasing of the song, umbrella sales world wide are increasing with some umbrellas even fitted with the addicting "ella, ella ,ella, eh eh " clip from the song.

It is further proven that artist Rihanna is warning of us of a future apocalypse, in of which only an umbrella can save us and we are urged to carry one at ALL times. It will rain meteors, and only those with umbrella ella elle ella eh eh eas can survive. If you survive the attack then you will see the second part of the apocalypse in of which zombies who were once of Resident Evil's umbrella corporation to attack you in of which you will have to ward them off by singing umbrella.

Since Rihanna's song it has become illegal to say the word Umbrella and have nobody pitch in and go ella elle alla eh eh...If such a act occurs you will be presented as a test subject to the umbrella corporation and offered up to postpone our apocalypse on the album's four year anniversary.

Umbrella Factories, or factories that produce umbrellas, are best known for flooding quickly in any sort of weather, be it rain, freezing rain, hail, sleet of ice. Occasionally umbrella factories will even flood without precipitation. The famous case of The Umbrella Factory vs. Weather, which closed on April 21, 2004, resulted in a loss by the weather. Weather has not yet paid the $4956 fine for the damage caused in the flood of Noah's Arc.