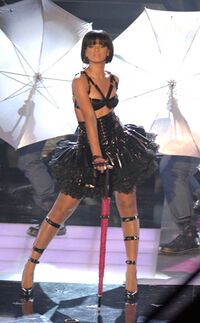 People in the background, holding umbrellas, while she's performing the very song that's CALLED "Umbrella"! Oh Lord, the irony! How very appropriate indeed! Whoever thought up that brilliant artistic touch should get one heck of a raise!

Robin "Bird" Rihanna Fenty (born February 20, 1988), better known as simply Rihanna, is a Barbadian R&B and pop recording artist best known for her over 70 number one songs, and also for getting the shit beaten out of her by her super hyperactive dancing boyfriend.

Facially resembling a giant, startled Easter Egg, Rihanna is singlehandedly responsible for irritating the fuck out of every person in the entire world with her single "Umbrella". It's so irritating that whenever or wherever anybody hears the intro, an over bearing rage takes over to destroy the object of which the song is playing on. The song temporarily became a pop culture sensation among chavs and teen mothers everywhere.

Rihanna is also responsible for having the most copied sex positions from 1988-present.

She's just having fun, honest! That's what you do when you're drunk.

Rihanna was born in Barbados (This means she's barbaric). She attended special ed classes at Charles F. Broome Memorial School, then at 15 achieved her big break. A big black gorilla pedophile named Dr. Jason Zimmerman, or Jay-Z for short, attended one of the talent shows put on by the school. He had been searching the world for an underage stripper to perform in his secret experiment to see how many people he could corrupt. When he saw Rihanna perform Mariah Carey's lapdance, he knew he had found his singer. So he roguely stole her from Ronald and Monica and together they swam the Pacific Ocean and entered the United States illegally. Jay-Z then disguised himself as a streetwise music producer and started his own record label, Fuc-A-Fella Records records. Rihanna was signed to the label and was a huge success. The two had been good friends, but once the fame got to her head, she ditched Jay-Z for her new Hollywood friends. And after Rihanna stopped returning his calls, texts, emails, IMs, and gifts made out of his own hair, he killed himself by eating too many bananas.

She WAS dating Chris Brown until he accidentally beat her in a huge fit of orgasm rivalling a wrestling match during passionate lovemaking in the back seat of Chris Brown's Lamborghini. So now, the two stars cannot be seen with each other. 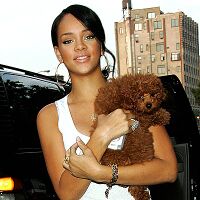 Rihanna and her pet baby ewok.

In 2007 Rihanna released a song dedicated to the uses of the umbrella. Since the releasing of the song, umbrella sales world wide are increasing with some umbrellas even fitted with the addicting "ella, ella , eh eh " clip from the song.

It is further proven that artist Rihanna is warning of us of a future apocalypse, in of which only an umbrella can save us and we are urged to carry one at ALL times, like Michael Jackson. It will rain meteors, and only those with umbrella ella elle ella eh eh eas can survive. If you survive the attack then you will see the second part of the apocalypse in of which zombies who were once of Resident Evil's umbrella corporation to attack you in of which you will have to ward them off by singing umbrella.

She likes to strut her man titties.

Since Rihanna's song it has become illegal to say the word Umbrella and have nobody pitch in and go ella elle alla eh eh...If such a act occurs you will be presented as a test subject to the umbrella corporation and offered up to postpone our apocalypse on the album's four year anniversary.

Rihanna's music, best described as a underground hardcore satan polka, is loved by no people not even by her own mother. The same people, in fact, that like tangerine lip gloss, jumpsuits, and Tom Sizemore.Her single "S.O.S" was a rip-off of "Tainted Love", but not only that, it gave sea captains a fun (not to mention gay) way to send an S.O.S signal when encountering danger at sea. But it was undoubtedly the single "Umbrella" that took the world by storm. LOL. Umbrella, storm. Get it? The song was written by Satan, who personally recorded a backmasked message into it, which may be responsible for the single's success.

Rihanna has also been know to have a HUGE lack of orginality and talent, yet she makes up for this by copying other artists such as Beyonce, Leona Lewis, Lady Gaga and about everyone else. She claims that all the stuff she copied she made herself. However, many claimed she learnt her lesson after she copied Chris Brown.....yet she still hasn't learned her lesson. And never will. 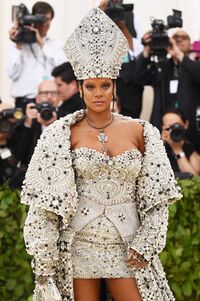 Ho ho ho! Look who went in the building!

Chris Brown is currently in the cellar (ella, ella, ella...) of a Woman's prison awaiting bail but organizers say they may not let him out because he is keep the prisoners in line. Brown is being held to high acclaim by certain fan boys for giving them that hot picture of her face all smashed up, as they now have something to jack off to. She now even gets funny looks from the bank teller (ella, ella, ella...). Rihanna now "sings" her songs with the same feeling most people got after hearing Umbrella for the fiftieth time in one day. However, the popularity of this song isn't Rihanna's fault, rather the fault of an overzealous record seller (ella, ella, ella...).

Not long after Rihanna become Chris Brown's punching bag she got bionic implants including a carbon nano tube reinforced skeleton and extendable razor claws that come out of her fingers because whips and chains and getting punched in the face just wasn't enough to fulfill her latex covered lust for hardcore BDSM. The painful cybernetic surgery that made her able to chase down and cut through Chris Brown's car was both masochistic and sadistic, her new electronic endoskeleton hit all the right buttons to turn her on, and hit Chris Brown in the face. Rihanna now goes to the gym everyday to get big biceps and a sixpack, so she can beat Chris Brown up the same way he beat her up. You can see her really fit abs in her new music video "Wait Your Turn".

After getting back together in 2012 and breaking up in 2013, it became apparent Rihanna was more forgiving than Jesus and hotter than Mary, except for her metal plate reinforced forehead, though she could always just wear a hat for that. Chris Brown still really misses their intimate sparring sessions though and spotting her at the gym as she lifted his career. When asked why she continued to put up with the abuse and gave him a second chance she responded, "Maybe I’m one of those people built to handle shit like this. Maybe I’m the person who’s almost the guardian angel to this ass hole boyfriend, maybe I can survive 46.2 G's and he can't, cause he's an angry lil bitch who throws tantrums like a toddler and breaks his toys when he doesn't get enough milk, and I'm the babysitter who needs to give him a spanking.

When not being beaten mercilessly by Chris Brown, performing, creating music or making appearances dressed to the nines on red carpets, Rihanna is an enthusiast of Xbox Live. In an interview with Seventeen magazine, she said, "Yeah, I'm really into Medal of Honor and Call of Duty, stuff like that. But I haven't played in a while because I got banned from Live for a month for trash talking. I swear, call a fat kid a fag and there's no turning back beyond that. I only did it four times, too."

Rihanna is also notorious for a forehead larger than that of any baseballer on steroids. This appendage may add unique acoustical resonance to her music, and may serve as a defensive weapon the next time Chris Brown wants to lay down the law.

Though accused by Rupert Murdoch of being a mutant; as revealed by the high priestess of Artificial Pseudoscientology Madonna, Rihanna is actually an ancient Sumerian fertility, death and war goddess who starred in Erich von Daniken's Battleship.